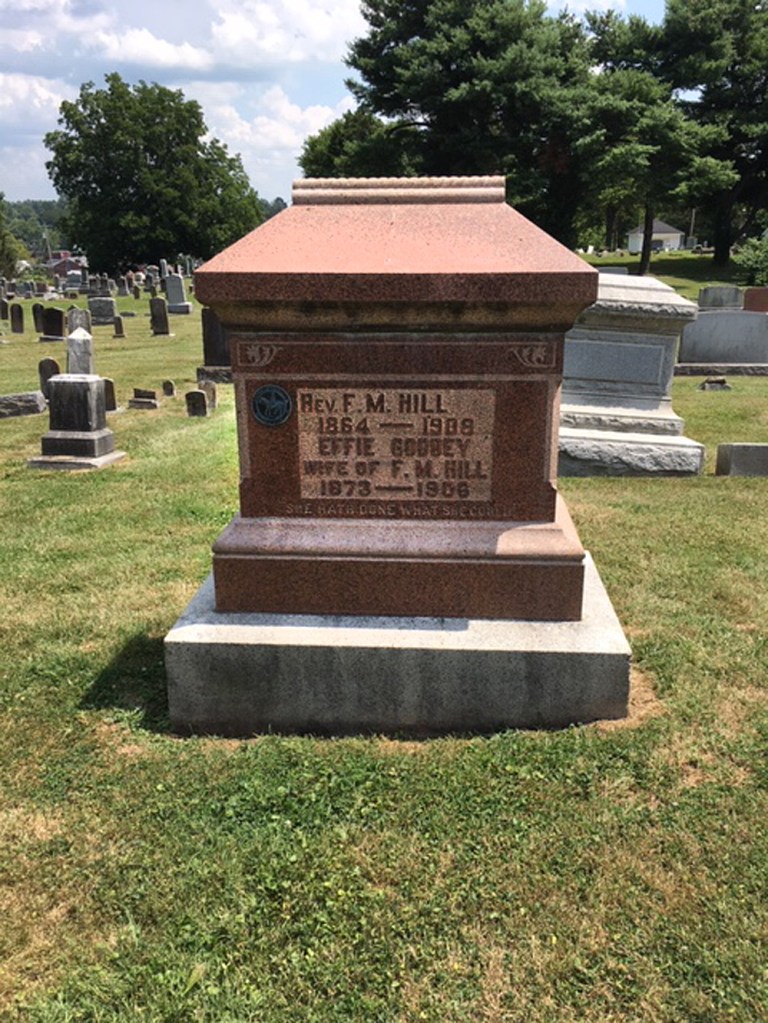 A large tombstone in Hillcrest Cemetery marks the grave of the Rev. F.M. Hill and his wife, Effie Godbey Hill. (Photo by Brenda S. Edwards)

Editor’s note: Information for this article was taken from research in The Advocate-Messenger archives and find the findagrave.com.

The Rev. F.M. Hill was a Methodist minister and served in several churches in Central Kentucky, including Perryville.

After serving a few years in a church, he moved on when the United Methodist Conference had its annual meeting each summer and made new appointments.

He held pastorates in Lancaster, Moreland, Richmond, Somerset and Carlisle.

While in Carlisle, Hill was commended by the Methodist Church. The church passed a resolution commending him as a preacher and a church organizer and builder for raising $25,000 in his four years as pastor there.

Hill also served as secretary for the South Kentucky Methodist Conference in the early 1900s.

Hill published a book “In Palestine With the Children” after he toured Palestine. The book was written in a “simple and fascinating way so that a child could comprehend it with delight.”

While he and his wife lived in Somerset in November 1900, Hill purchased the W.B. Walker farm east of Perryville.

Hill was born in 1864, and was the son of John L. Hill. Effie was a daughter of Mr. and Mrs. W.B. Godbey of Perryville. She was the niece of Judge Milton Durham of Danville.

Hill and Effie and their two children are buried in Hillcrest Cemetery in Perryville.

He and Margaret Belwood were married Sept. 26, 1908, in Jefferson County. She was about 25 years old and he was 44 years old. The marriage lasted three days when an accident took their lives.

While they were driving a horse and buggy over the Chaplin River, the horse became frightened and backed up pushing their buggy over a high bank and into the river in Nelson County, where they drown Sept. 29, 1908.

Margaret was born in 1885 and was a daughter of Eugene and Laura H. Belwood. She is buried in the Dutch Tract Cemetery in Henry County.