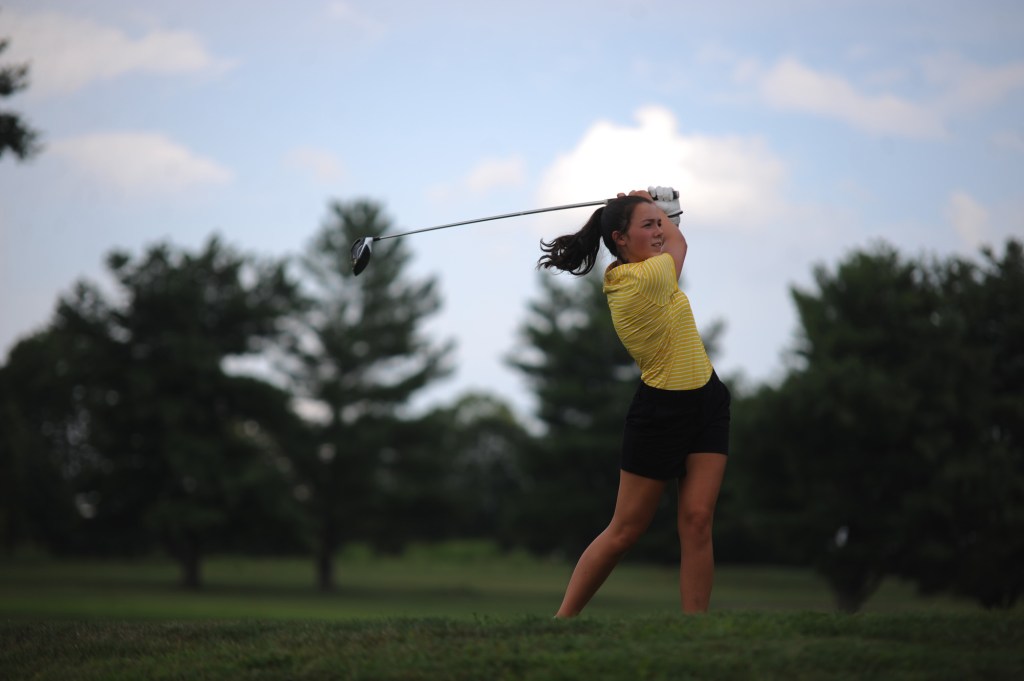 Freshman Carly Durham is just one of the crop of underclassmen who be part of the core that first year coach John Cerqueira will rely on to grow the Boyle County girls golf team. (Photo Derek Brightwell)

John Cerqueira might have a new title as he begins his first season as the head coach for the girls golf team at Boyle County High School, but he’s been around the team for years, and even served as the president of the booster club for the last two years.

“They’ve (his daughters) been out here since they were in sixth grade, so I’ve been out here every year it just so happens that this year I answered the call of duty,” he said.

It’s a passion for the game of golf, but also for the group of girls under his wing that led him to answer that call. 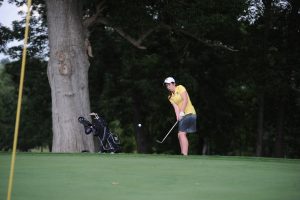 Freshman Ella Grace Gover chips onto the green during a Boyle County practice. She’s part of the young core that will be the foundation of John Cerqueira’s team. (Photo Derek Brightwell)

“I love golf, first and foremost, and I love kids. I love my kids, but I love all these girls a lot. They’re very open to listening and trying to do what we ask,” the first year coach said. “The best thing about it is they’re a joy. They have fun. Golf is a mean sport; it’s very humbling. It can be very brutal on you, you can hit the best shot you’ve ever had and end up in a hole in the middle of the fairway. These girls come out, and they smile and have a good time. That’s what it’s all about, they’re learning life lessons.”

The team that Cerqueira inherits is a young one, with juniors Paige Newby and Riley Cerqueira being the oldest players, as they were last season as sophomores. The Rebels haven’t had a senior on the roster in three years.

“Last year we were very young. My oldest daughter Riley and Paige Newby were our upperclassmen and they were sophomores. The year before that we had one senior but we were very young and had eight graders and freshmen playing in varsity tournaments,” Cerqueira said of the young team. “This year, we’re going to have a similar type of year. However, these girls have worked hard in the offseason: they’ve taken lessons and gotten better. We’re going to be able to put out five really good girls and then our six through eight are just within a few strokes of them.”

Despite the youth, Cerqueira believes that his golfer’s growth in the offseason and the nature of the game of golf will allow them to be competitive as they enter a new region in 2019.

“We’ve got a very competitive team so I expect us to do much better. You know, golf is weird. Sometimes you’ll go out and shoot 40 and the next day you shoot 50 and you haven’t changed anything; it’s just the luck of the draw,” he said. “As far as how I think we’ll do, I think we’ll do very well in comparison to years  past but a part of that is we’re older. As girls get older they get stronger, they’re going to hit the ball further. These lessons are paying off, the girls are able to keep the ball in play and even when they miss it, it’s still going straight down the fairway so they’re advancing the ball.” 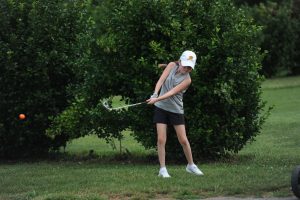 Despite being in seventh grade, Emery Herron will be competing for a spot on the varsity team at Boyle this year. (Photo Derek Brightwell)

Cerqueira also believes that his familiarity with the team will make the transition to a new coach easier. In addition to already having a relationship with his new team, he also knows every golfer’s personal swing coach, so he’s not giving them conflicting information with his coaching.

“I’m hoping to be more individual with the girls. I know all of their swing coaches, so that helps; I know what their philosophy is, and what they’re trying to do with their swings. I’m not going to add to it, but I can at least work within it and I know what to tell them when I see them doing something wrong,” he said.

Cerqueira is also already starting to recruit new golfers to join his team. He recognizes the issues with expanding the game of golf, citing a lack of widely accessible youth programs like in sports like basketball and soccer. But also realizes that the Junior PGA programs at Danville Country Club –Boyle’s home course– and Old Bridge Golf Course produces a lot of new talent from which he can recruit.

“They’re learning from a young age, and not just learning but learning the right things to do,” he said of the programs. “That’s the big thing with golf; you can go out and hit balls but if you don’t know what you’re doing then you’re going to have terrible results. So these Junior PGA programs are going to basically be where I’m recruiting from.”

Another source of recruiting is word of mouth from his own players as he tries to change the perception of golf among potential young golfers.

“I’m trying to instill a lot of fun, but we still have to do these qualifying rounds where they have to walk and they don’t love that, but we’re doing some fun stuff as well,” he said. “I’m hoping they’ll tell other girls and I’m hoping they’ll say ‘You know, golf can be fun’. So we’re growing, we’ve got eight this year and I foresee us having 10 or 12 next year.”

With Boyle County changing regions to join Region 4 this year, Cerqueira can’t predict where his team will finish as a whole this year until he gets a better feel for the field, but he’s hoping that the change in how golfers will qualify for the state tournament could benefit his two upperclassmen as the team grows under them.

“I’m hoping one of our girls down the road whether it’s Riley (Cerquiera) or Maggie (Cerquiera) or Paige (Newby) or Carly (Durham) these girls are working really hard and hopefully can get one of these spots,” he said. Team wise, you have to be solid one through five. Like I said, we’re young and when you’re young you don’t hit the ball as far and then you’re playing longer clubs to the greens and it’s more difficult to get there, more difficult to hold the greens…

“Can we win the region? We moved into a new region, so I have no idea who’s in it and what to expect. I’ll know more when we go to region this year and I’ll see what the field is like. I think that process is going to help a lot of those girls who normally wouldn’t get the opportunity to play at that next level.” 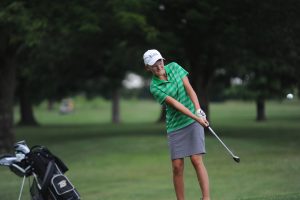 Maddy Funkhouser practices her short game during a qualifying round on Wednesday. (Photo Derek Brightwell)

The Boyle County girls golf team will begin its season on Monday with the Central Kentucky Classic, which they co-host with Mercer County at the Danville Country Club, on Monday at 9:00 a.m. The boys will be in action the following day.