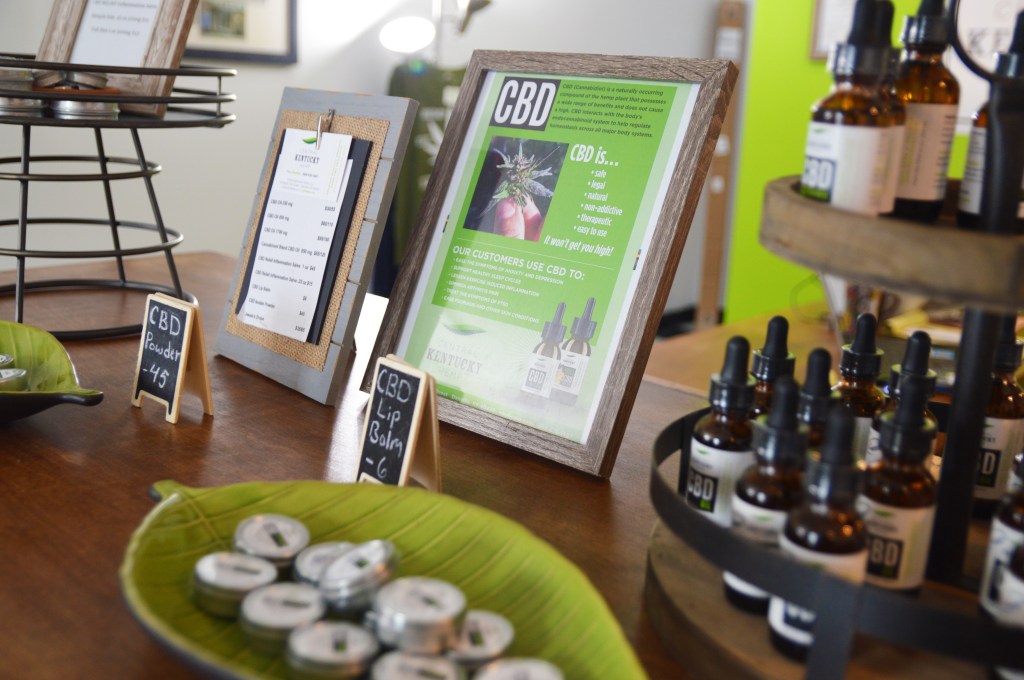 Bobbie Curd Central Kentucky Hemp, located in Danville, sells CBD products many claim to aleviate issues, such as tension, stress, anxiety, chronic pain, migraines and many other ailments. Shop-owner Mary Noelker has made it a solid practice to show each and every customer her the third-party testing results of everything she sells. "We need regulation," she said, but offered, "I don't want to be regulated out of business, either." If the FDA makes a ruling that CBD is a medicine as opposed to a nutritional supplement, small retailers like her will be put out of business.

Ryan Quarles says the Food and Drug Administration will tell you today it’s illegal to consume any hemp products. “However, the fastest growing part of our program has to do with hemp-derived products for consumption,” he said.

Kentucky’s commissioner of agriculture is referring to the rapidly growing market for cannabidiol — or CBD — a “natural remedy” being used for a myriad of conditions, from migraines and anxiety to skin disorders and chronic pain.

CBD is just one of 104 chemical compounds known as cannabinoids, found in the cannabis (marijuana) plant. The federal 2018 Farm Bill stipulated that hemp-derived products containing up to 0.3% of THC are legal to sell. Now, CBD has been showing up all over, from smoke shops to gas stations and nutritional retailers. The industry is being called “the wild west,” for many reasons.

“We need regulations,” said Mary Noelker. She owns Central Kentucky Hemp in Danville, and makes it a practice to explain to customers where the CBD comes from she mixes in compounds for them, as well as explaining the certificate of approval from third-party testing results. She wants them to know they can’t trust every label marked “CBD” they see out on shelves.

“Currently, there’s no way for consumers to look from one brand to another and be able to tell exactly what’s in it … Oversight is needed so that people know it’s real, and it doesn’t have microbial contamination,” Noelker says.

And in May, the FDA held hearings where interested parties could testify about what they think should happen with the regulations.

Noelker watched the exchange online. “There were plenty of people during the testimonies saying it’s a dangerous substance and needs to be regulated,” she said. However, there are no scientific facts behind any of the “danger” claims.

Like many, Noelker feels there’s “a lot of pharmaceutical money that’s out there, putting pressure on agencies.”
But, as much as she feels labeling and other regulations are needed, Noelker and others are also worried — they could be regulated right out of business if the FDA decides CBD is a “medicine” instead of a “supplement.”

Quarles says he doesn’t want that to happen. He thinks CBD should be sold at the local CVS and GNC, just like any other nutritional supplement or vitamin.

He says the KDA was involved with the hearings, and he wrote a letter to the FDA on May 31, asking it “to be a constructive partner and work with the hemp industry, and don’t regulate the hemp community to death, as it’s now just getting off the ground.”

Quarles said KDA knew “the FDA would assert its jurisdiction at some point, and we want to help educate them. Not just about the products being made, but the economic impact hemp will have.” So much so that he’s invited the FDA to make a visit to Kentucky before making its ruling.

In Boyle County alone, the KDA has approved six growers and up to 382 acres for hemp cultivation. Statewide, it has approved about 1,000 growers to cultivate a little more than 60,000 acres of hemp.

Quarles says there are 200 hemp companies in the state — with hemp being grown in 101 of the 120 counties — what he calls “an astounding amount.” He says currently, “We have 500 full-time jobs that exist today because we chose to lead on hemp in America.”

Quarles says some companies are deliberately working with a lot of Kentucky farmers due to the state’s “strong history of being the hemp epicenter of the U.S.”

He says Kentucky expects to have over $100 million in sales alone this year, “giving a lot of farmers an opportunity to experiment and decide if this is a crop for them. Some are making money, and some are not.”

KDA’s Industrial Hemp Research Pilot Program is in its last year, what Quarles terms as a “transition year — from research to commercialization.” But he says there are still “half-a-dozen issues the state is working on,” like the hesitancy to lend by banks to those in the industry. Or how some hemp companies haven’t been able to use credit cards due to processing companies not wanting to work with them, “although they’re 100% legal companies.”

Noelker has experienced this first-hand. She says she considers herself lucky to have been able to get a loan, thanks to knowing her hometown banker and being able to explain the legality of her business.

But she lost her credit card capabilities for a couple of months due to a large out-of-state processing company she says that was fined for “processing for companies that were doing illegal things. The big banks ran scared and dumped all their hemp customers.” Noelker says it took some time to find a new credit card processor because she’s not a huge operation, and she definitely missed out on sales.

“So, we need to have the banking industry stabilized too,” she said.

And there’s been major issues with hauling hemp in some areas. A truck driver with an Oregon company was arrested after Idaho officers checked his haul and deemed it marijuana, although it was hemp — which the federal government says is legal to transport across state lines. The driver was arrested, charged with felony trafficking and jailed for four days in what was deemed the largest bust ever made by Idaho State Police.

The trucking company is currently suing Idaho officials over the incident, as well as the company that bought the load of hemp to produce CBD with.

“There’s no way of distinguishing hemp from marijuana visually, it has to be tested,” Quarles says. There’s definitely a need, he says, “for a quick and dirty field test that can quickly be deployed” in an economical way, to test hemp.

“There’s nothing simple about hemp. It gets complicated, real quick,” Quarles says. “Not only hemp production, but policy.”