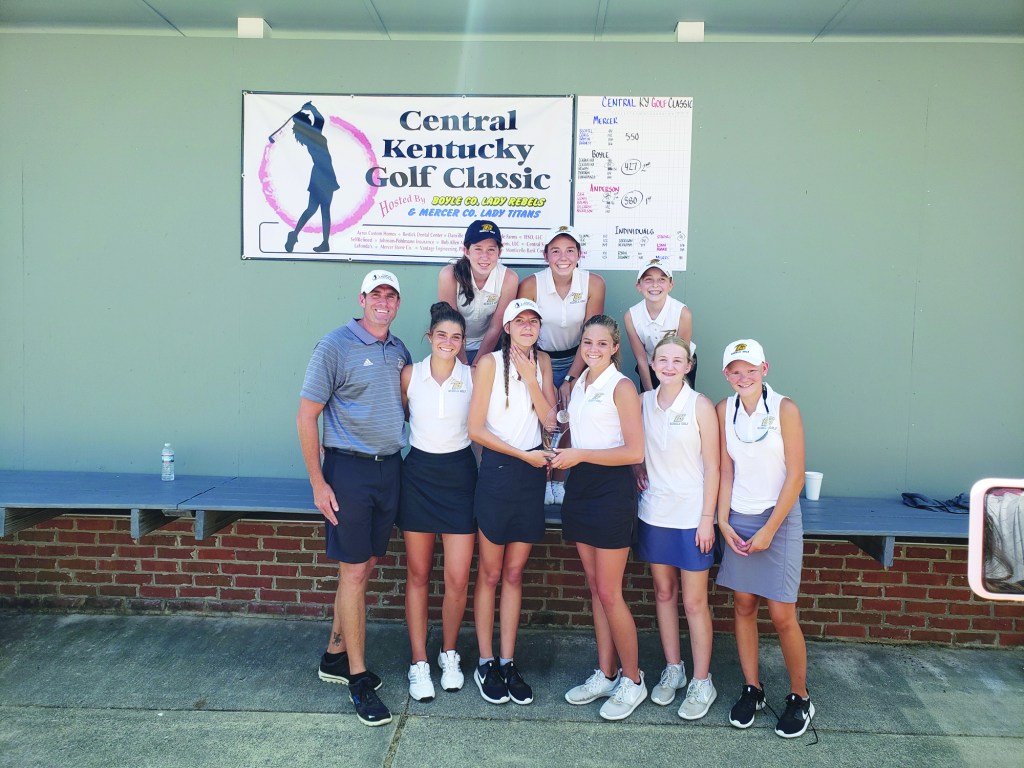 The Boyle County girls golf team officially began its 2019 season on Monday with a second place finish in the Central Kentucky Classic, which they co-host with Mercer County at the Danville Country Club.

Individually, Boyle freshman Maggie Cerqueira posted the lowest score of the tournament with an 84, seven strokes lower than the next lowest score.

“To be honest, not surprised at all with Maggie and the way she’s been putting in the hard work and she comes out here practicing,” Boyle coach John Cerqueira said. “We were out here last night and played nine at 7:00 at night. So that doesn’t surprise me at all.” 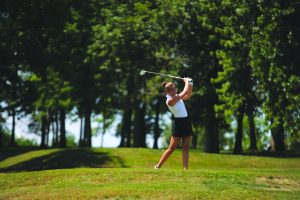 “It shows me what hard work does,” Maggie Cerqueira said of her individual victory. “Last year I backed off halfway through the season and I didn’t keep going.”

Cerqueira finished out her round with a fist pump as she sank a putt for an eagle, the first of her life.

“I was like ‘Is this for real, is this actually happening?’ I was kind of surprised,” she said.

Anderson County – who had individual golfers Allaka Lewis and Haley Case finish second and fourth, respectively with 91 each – topped the field with a combined team score of 380. Boyle’s 427 combined finished second in John Cerqueira’s first tournament as a head coach.

“I’d like to say that it’s mostly what I’ve done, but it has nothing to do with what I’ve done,” Cerquiera said. “We’ve had a great program for years. These girls are putting in the work. They’re doing it with their swing coaches and their parents bringing them out here and putting in the time to give their daughters the opportunity to get better.

“These girls, like I said before, they’ve been putting in the work, they’ve been taking lessons, they come out here and a bad hole doesn’t get them down. They bounce back on the next hole and they keep playing hard. They’re a joy to be around. I never saw one of them mad or upset. They were smiling and that’s what you’ve got to be out here. You’ve got to enjoy what you’re doing.”

For the young Rebels team, getting a full 18 hole tournament in was a huge hurdle. Cerqueira believes that now his girls can grow from the confidence of seeing their scores matched up against golfers from other schools.

“The biggest thing is a lot of these girls have never played 18 holes before. So, I think just getting that under their belt, they’re going to realize that they can do this; it’s not that hard. Before you play it, it’s hard to wrap your mind around walking 18 holes being out there for five or six hours,” he said. 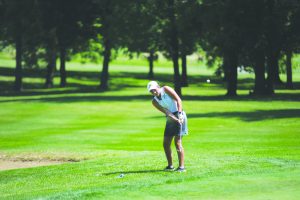 “Seeing that confidence when they throw the score on the board and finishing second, that they can compete. They’re young and they’re going to think that all these girls are older and going to be that much better than they are,” he added. “They’re working hard and I think this shows them that they can compete on that level.”

Team success aside, Cerqueira is encouraged by what he saw from the individual golfers on the day. With the lowest five scores from one event being the five that make the rotation for the following event, he hopes that the competition will only improve his golfers’ games.

“I knew Carly Durham had that score in her. She had a rough hole, but again she smiled and got through it. Ella Grace Gover put up a good number. She could potentially break into our top five, he said. “Emery Herron, who’s in seventh grade, can see that she’s not that far off from someone who’s a year or two older than her. I think it’ll keep them competitive to see that if they just improve this portion of their game or that part, they can move into the spot. I don’t think this will create a gap, I think it will bring us closer.”

Mercer County’s young team rounded out the three team field with a team score of 550, but coach Jeremy Brummett is encouraged by what he saw from his three newcomers.

“The three girls, my three new – Chloe (Barnett), Ania (Boutin) and Madison (Craig) – they did well for their first 18 hole tournament,” he said. “We had a few holes where we had to take circle eights. Honestly, I didn’t think we’d get through 18 holes, so I’m really proud of them for sticking it out. We’re going to play some nine hole matches down the road to just get some more experience. As long as they’re improving and having fun, that’s really my expectation.”

Mercer’s Emily Bechtel shot a 94, good for a tie for fifth place among individual scores. But Brummett believes that that number could have been lower and expects big things from the junior this season.

“I know she’s not happy,” he said. “Coming down the stretch she had a couple of holes get away from her. What could have been a really good day in the 80s ended up being a 94. But it’s early in the season and she knows what she has to improve on, so I’m not worried about her.” 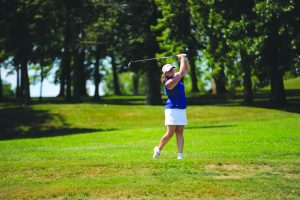 This is the second tournament she has played in this year, playing in one in Shelbyville on Friday.

“I really thought Emily would’ve played better these first two, but it is the first two high school tournaments, so we’ve got some nerves and butterflies,” Brummett said. “This course was playing really tough today. It’s hard, it’s firm, greens were fast, fairways were fast. There’s a lot of dry spells out there but there’s a lot of thick bermuda as well.

“She has a chance to potentially do some damage in the region, but we’ve got to cut out those blow-up holes. We’ve got to keep those holes to bogey, double bogey tops instead of quadruple or triple. We had one last Friday that was six over par and that just drains any momentum you might have had.”

The Rebels will be in action in Anderson County for nine hole match-play on August 13, and for a tournament on August 17. Mercer County will play in a tournament at Maywood in Bardstown – the site of the regional tournament – on Saturday, August 10.