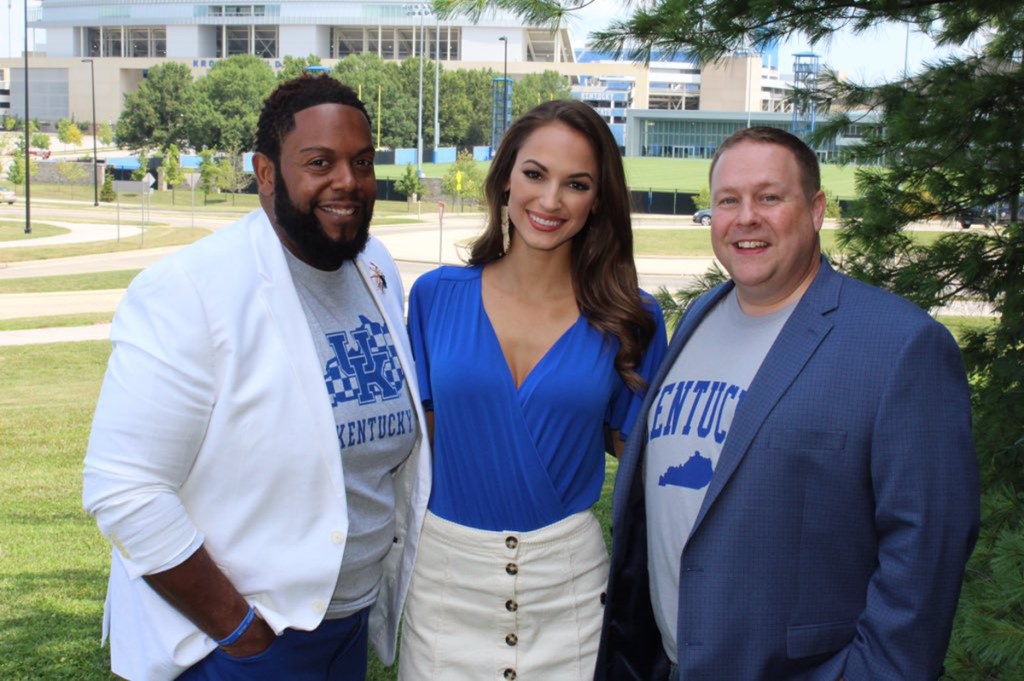 Former Miss Kentucky Maria Montgomery of Boyle County will join Derrick Johnson; left; and Dan Rieffer on "Out of Bounds; a new 30-minute show that will air on FOX56 at 10:30 p.m. starting Aug. 25. (FOX56 Photo)

If you have enjoyed seeing the success Boyle County’s Maria Montgomery has had modeling nationwide, working as an on-court host at Rupp Arena for Kentucky basketball games or appearing on various TV shows, get set to start seeing her regularly on TV.

Montgomery, the 2009 Miss Kentucky USA, will be the host for a new show — “Out of Bounds” – on FOX 56 with Fox Sports anchor Dan Rieffer and former Harrodsburg High School and Kentucky football player Derrick Johnson.

“Maria’s role on the show will be as main host. She will kind of set up things for Derrick and me to weigh in on,” Rieffer said. “But she’ll also have opportunities to offer her opinion.”

The show’s focus will be mainly on UK football and basketball with the trio discussing key plays and moments from Saturday’s game as well as analysis on postgame comments from players and coaches.

“We’ll look back at what stood out from the slate of college football and basketball games from Saturday and look ahead to the following week. Then we’ll show a few of the most interesting/entertaining videos from social media from the week and react to them,” Rieffer said.

“If there are any hot sports topics locally or nationally, we’ll give our takes. Sometimes those topics could be outside the world of sports, like pop culture, but no politics. Our goal is to keep things fun and lighthearted.”

Rieffer thinks Montgomery is a “great fit” for numerous reasons, including her TV experience. 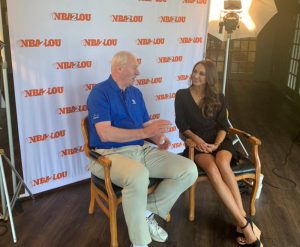 “She co-hosted a show with me on FOX a couple years ago called ‘Spirit of the Derby’ and did well. Also,with our show taking the place of the last half hour of our 10 p.m. news, she gives us an opportunity to keep some of our female news audience that might tune out if it’s just dudes talking sports,” Rieffer said.

“Maria has grown up around UK sports, so she knows a thing or two about it. And this show isn’t going to be a deep dive into stats or X’s and O’s. Again, her female point of view helps balance things out with Derrick and me and hopefully keep women interested in watching. If she has ideas on more female-centric interests or topics, we’ll definitely be open to delving into those.”

Rieffer’s plan is for the format to remain consistent with the opening segment dealing with Saturday’s top plays, second segment focusing on player and coach comments and looking at the biggest things that happened in college football or basketball on Saturday along with a look to the upcoming week. The third segment weekly will have the best from the week in social media and the fourth segment will be a discussion of any hot topics.

“The fifth and final segment will include the (LSU coach) Ed Orgeron clip of the week as we try to decipher what the LSU head football coach said,” Rieffer said.

Orgeron is known for his wacky, amusing quotes and the trio will have some fun with their perspective on what he says during the football season.

“We expect the show will evolve and things could definitely change. We’ll keep an open mind and see what works. Between football and basketball seasons, we’ll definitely need to adjust the format a bit,” Rieffer said.

Meshing three personalities who have not worked together before is not an easy endeavor. For a weekly sports  TV show, it can be even more difficult if the chemistry is not right.

“Maria and Derrick both have great personalities. We want their personalities to shine,” Rieffer said. “I’ve kind of come to be known for bringing a lot of energy. I intend to continue to bring that.

“The idea is for us to be ourselves and have fun. We hope it comes across as a group of friends discussing UK sports and other things that everyone can relate to.”