Poised to turn the final page of the 1960s and embrace an eminent new decade, on this day in 1969 the waves of youth culture that the decade had sent rippling through the nation were still washing down Walnut Street in Danville. At that time a rising junior at Centre College, Bruce L. Beck, of Owensboro, went public in the pages of The Advocate-Messenger with a call to Boyle County’s youth that, for today’s readers, may recall the whimsy of the era. 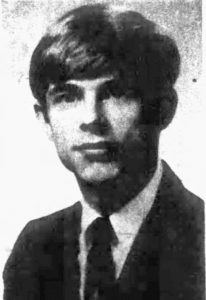 The front page of the Advocate-Messenger featured a photo of a young man sporting a mop-top cut alongside a tip-off that the entirety of the area’s musically-inclined youth were invited to join Beck in a “Folk Group”.

The Advocate- Messenger reported that Beck hoped to organize “the best musical organization in this part of the state.” Area youth would combine organ, harpsichord and piano talent with choral readings to bring “a fast-driving story of young people in search of truth” to the stage of the Danville High School auditorium. At the time Beck explained that the group would attempt Ralph Carmichael’s “Tell It Like It Is,” a production that The Advocate-Messenger reported was being called “one of the greatest folk musicals ever written.” He explained, “Young people want and need an outlet for their musical talent as well as a musical production which says just what they want it to say. This is it.”

A later edition of the Advocate-Messenger reports that Beck’s offering managed to attract 50 young people from throughout the state, with an array of schools and universities both north and south of Danville represented in the production. A drum and guitar were added to the folk ensemble, and it was reported that the young artists made room to tackle “the modern concept of god and of religion” within their time upon the stage.