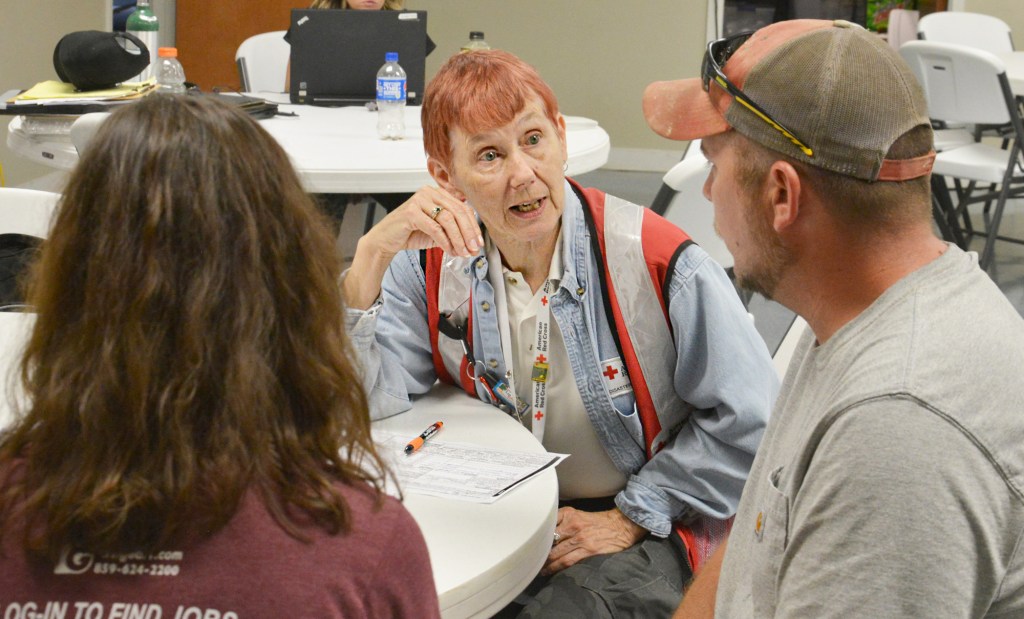 Although residents who have homes still left standing are now allowed back into the Indian Camp neighborhood in Moreland, there is still no public access to the area. Five homes were completely destroyed in Thursday’s early morning Texas Eastern Pipeline explosion, with up to 11 more damaged from the natural gas blast.

One person was killed in the incident and several were sent to the hospital.

Trish O’Quin, deputy Emergency Management director with Lincoln County, said there are still five homes without electricity, but that could change any minute with the current work being done. Those residences have to be given the OK from a state inspector first, she said, to ensure they’re safe to return to.

But those who have had homes destroyed aren’t allowed back in. “Enbridge is facilitating them in an undisclosed location,” O’Quin said about the Texas Eastern Pipeline owner paying for housing for displaced families, and that she asks the community for their privacy at this point.

She said some media outlets have been pretty relentless about trying to locate those families, “They really just need to be given some time to heal.”

O’Quin said officials thought nine other houses were damaged at first, but since the initial blast, they’re receiving “other reports that some were damaged, and we saw no damage outside — so must be the interior. Probably 10 or 11 damaged.”

The ongoing investigation is confidential at this point in time, O’Quin said, and could not relay any information. “They have their meetings here daily on investigations, and they’re working really well with our local people,” but the circle is kept pretty tight, she said. “They are working on getting timelines, things like that. We do ask that people respect the residents’ privacy, and don’t attempt to drive through that neighborhood or general area, looking around.”

O’Quin said she understands the curiosity; “I was floored when I drove back there. It was a real moment. You don’t see stuff like this happen every day,” she said. “All of the sudden it does, and it’s immense.”

Rebecca Hardin is regional preparedness coordinator with the Kentucky Department of Health. She’s been working with Red Cross and Enbridge Inc. to ensure families are getting necessary prescriptions and other medical supplies they haven’t been able to return home to get access to; or those who lost their homes.

Hardin said the community has been amazing, coming together to donate time, money and whatever’s needed for those families affected. But there is some information she wants to make sure everyone is able to get their hands on.

“There’s a lot of people saying they’re having trouble sleeping; they have some fears. It’s good that they’re talking, that’s a good thing — it’s a good sign,” Hardin said. Lincoln County Emergency Management recently shared a Red Cross list of mental health resources, she said, “including what’s ‘normal’ after a disaster and what’s not.”

For instance, if residents are still having emotional problems up to two weeks after the incident, “you may want to speak to someone. The public, health-wise, is one of my main concerns.”

Hardin lives a mile from where the natural gas pipeline exploded. “I stood down at (U.S.) 127 and watched it myself. When I talk to those people who live half-a-mile from it, I understand — I get the initial feelings I had until my brain could process it. I can’t imagine the families who are displaced, how intense of an experience it is.”

Hardin said the explosion put fear into everyone in this area. “When you wake up in the middle of the night and see that, do you need to evacuate immediately — the thoughts that run through your head. The entire community is processing that right now, and if they feel like they need any additional help whatsoever, they can contact a counselor, go to a school counselor, request assistance through me or the Lincoln County Health Department. We can get some mental help for the community.”

Hardin also said there is resource material available for any families who feel like they need more guidance in how to talk to children after disasters like this, as well.

Candida Byrd just began her position with the Helping Hands Family Resource Center in Lincoln County in February. Now she is an army of one.

“I jumped in with two feet, that’s for sure …” Byrd says from her office, located just behind Hustonville Elementary School. She has functioned as a command center where donations are concerned.

“Right now, we are taking small household items — pots and pans, dishes, utensils, even kitchen towels and washcloths, bath towels — anything that they can use, other than large items. We can’t do beds and couches yet, we don’t have places to store them,” Byrd said.

Household cleaning and laundry supplies are also in great need, since some residents have been allowed to return to their homes, while others are going into rental housing. “Just things you don’t think about that you use daily … Some will need to do a lot of cleaning when they return to their homes, others will probably want to clean their rental units.”

Cash is not being accepted by Helping Hands, but prepaid debit cards are — and are greatly appreciated, Byrd said. “The families can use those to pay bills … Also, we can keep track of what went to what, so that really helps.”

This is Byrd’s first disaster incident she’s worked. “But you know, you just — it’s just common sense, what’s their major needs. First was shelter, second was clothing and food, we’ve got those.”

Byrd has been approached by some who were interested in speaking to a counselor, and she’s referred them to Lincoln County Schools, who have made their counselors available to the public. “They go in and sit with them, then make a referral to who would best meet their needs. That’s been handled by Lincoln Schools — our children are there. We’re going to take care of these families.”

Byrd says the public can also follow Helping Hands Family Resource Center on Facebook, where she updates the latest needs being accepted for families.

As far as mental health services, Byrd says families with children in Lincoln County Schools may contact Helping Hands for referral help, to set up counseling services for children and parents. Enbridge has set up a help line of its own, to offer counseling services to anyone affected.