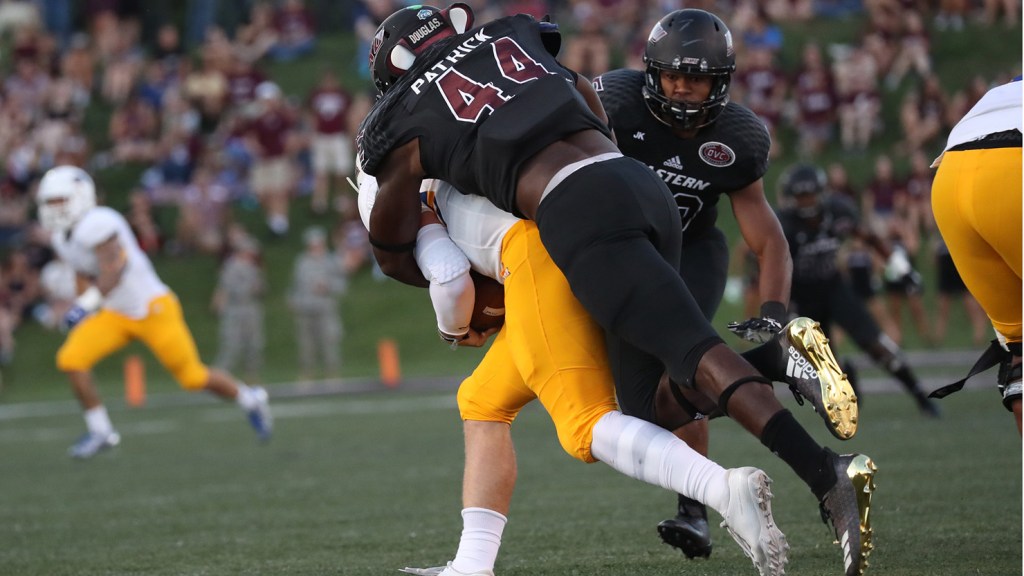 Redshirt senior Aaron Patrick has been selected to the preseason watch list for the national defensive player of the year, an award once won by former NFL star Jared Allen. (Photo EKU Athletics)

Twenty-five players from across the nation are on the initial watch list.  First awarded in 1995, past winners include NFL players such as Dexter Coakley, Rashean Mathis, Jared Allen, Arthur Moats and Kyle Emanuel.

The list will be updated during the season.  A national panel of over 150 sports information and media relations directors, broadcasters, writers and other dignitaries will vote on 25 finalists following the regular season.

The 6-foot-4, 245-pound defensive end was a first team All-Ohio Valley Conference pick by coaches and communications directors and first team All-OVC by Phil Steele last season.  Patrick ranked second in the OVC with 0.68 sacks per game. He finished the season with 53 tackles, 12 tackles for a loss, 7.5 sacks, 15 quarterback hurries and one pass break-up.

Patrick had 2.5 sacks in the season-opener against Morehead State (Aug. 30).  He had a sack in a near upset of FBS Bowling Green (Sept. 15). The Dayton, Ohio native had 1.5 sacks against Eastern Illinois (Oct. 27) and posted a sack with six tackles in the season-finale at Tennessee Tech (Nov. 17).

EKU ended the 2018 season with four straight wins and was in the conversation for a playoff spot.  Eastern Kentucky finished 7-4 overall and third in the OVC with a 5-2 mark. The Colonels will begin the 2019 season having won 10 of their last 16 games.