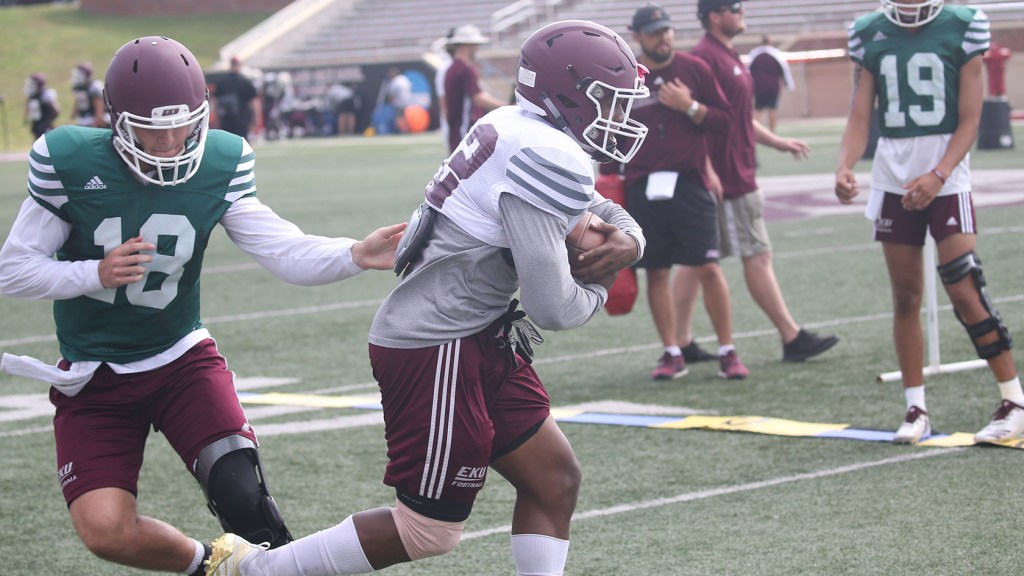 RICHMOND — The Eastern Kentucky University football team will have an old and young mix in the backfield this season.

The Colonels have senior running backs Daryl McCleskey Jr., Jason Lewis and Elis Cain, along with redshirt sophomore Alonzo Booth back for the 2019 season.  Those four are joined by three freshmen.

“We’ve got a veteran group coming back, a lot of guys who have already been in the room,” running backs coach Patrick Parrilli said.  “They understand the expectations. I love the way they’ve been competing. There’s a lot of competition in the room. It’s a group that wants to be really good and you can tell by the way they handle themselves.”

The 5-foot-9, 190-pound McCleskey was an all-conference pick a year ago and a preseason All-Ohio Valley Conference selection this season.  He finished fifth in the Ohio Valley Conference with 651 yards, scored five rushing touchdowns and averaged 4.5 yards per carry. Lewis, who stands 6-foot-3 and 240 pounds, contributed 203 yards with an average of 4.4 yards per touch.  Cain, who is 5-foot-10 and 200 pounds, had just four carries, but averaged 4.5 yards and scored a touchdown. The 6-foot-1, 250-pound Booth played in the first four games a year ago and then decided to use his redshirt season. He scored two touchdowns, totaled 99 yards and average 4.5 per carry.

“Daryl’s a small guy but he’s not afraid to run you over,” said Parrilli.  “Jason and Alonzo can run away from you. Those guys are all capable of a lot of different things.”

“The new guys are quick learners,” Parrilli said. “The older guys are really an extension of me.  They do a really nice job of taking a leadership role and making sure if there is a mistake that they’re correcting it. Sometimes it’s kind of a race. I’m running up to make the correction but the veterans have already made it first.”