As regulations are in the works, people speak out about using hemp-derived CBD 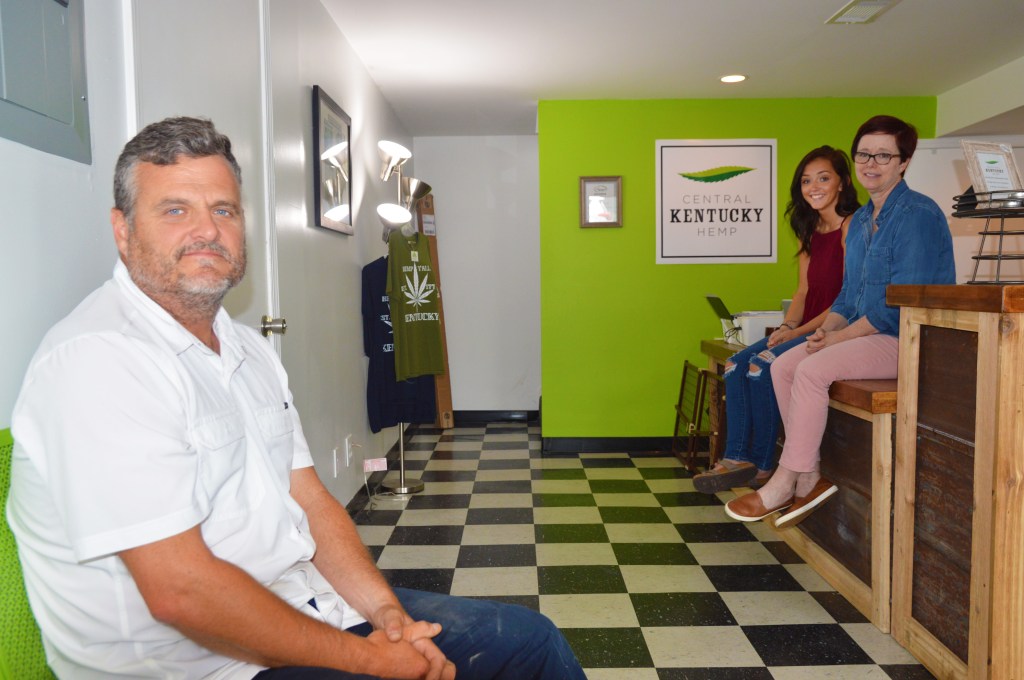 Bill Noelker, from left, with neice Rosemary Cook and wife Mary Noelker, sit sinside of Central Kentucky Hemp, the retail store Mary runs offering third-party tested CBD oil from a local hemp farm. Bill Noelker, a veteran fighter pilot who flew in Desert Storm, says the oil has done amazing things for his PTSD symptoms. "If it's a placebo, then don't take it away from me," he said. Rosemary Cook and Mary Noelker swear by benefits of the oil, as well. (Photo by Bobbie Curd)

Editor’s note: This is the second in an ongoing series about the comeback of industrial hemp, and how the arrival of new products on the market, such as CBD oil, are in the process of being regulated.

The Food and Drug Administration is “exploring potential pathways for various types of CBD products to be lawfully marketed,” as said in a release about its public hearing held on May 31. Various stakeholders were given a platform to share feedback and experiences “to provide the agency with scientific data,” as well as those concerned about the possibility of harmful products that could be out on the market.

Jonathan Miller, a Lexington attorney, has been a long-time advocate for the legalization of industrial hemp, and the products derived from it. He’s now general council for both the U.S. Hemp Authority and U.S. Hemp Roundtable.

“We lobby Congress, we worked on the development of the 2018 Farm Bill and have been working with the FDA to come up with a new regulatory structure,” Miller said.

He explained that with hemp, “It starts with the growers, which of course are the farmers, then the harvest, then it’s sent off to the processors for the finished product, which is sometimes CBD, or food or hemp fabrics or hemp construction materials. Then the final step is the retail sellers.”

The FDA decreed about three years ago that CBD couldn’t be added to foods or sold as a dietary supplement. But, Miller said, they came around, and a few months ago the FDA announced it would be working on a regulatory path for CBD sales.

“What’s forced the FDA’s hand is that it’s incredibly popular in all 50 states,” Miller said, referring to CBD oil. “And the fact because it comes from cannabis … there is some controversy. But it’s not a controlled substance, it’s safe. The FDA feels compelled it needs to go through the proper procedures of approval. We’re trying to make it go as safely and quickly as possible.”

In May, Miller testified during the FDA hearing. Afterwards, the agency accepted written comments on the issue. “And by the end of summer, they’ll give a timetable for the next steps. We’re hopeful this can all be resolved in a year.”

According to Peter Grinspoon, MD, a contributing editor to the Harvard Health Blog, the strongest scientific evidence so far is CBD’s effectiveness in “treating some of the cruelest childhood epilepsy syndromes,” like Dravet or Lennox-Gastaut syndromes. These conditions typically don’t respond to antiseizure medications.

Grinspoon wrote that in numerous studies, CBD reduced the number of seizures, even stopping them in some cases altogether. That led to the FDA approving Epidiolex, containing CBD, the first-ever cannabis-derived medicine for those conditions.

But many others are toutings its effects for other uses, such as stress, anxiety and chronic pain.

Ken Douglas, 72, answered the door of his Junction City home on a sunny afternoon. “I’m barefoot and I love it!” He was in the Navy from ‘65-’67, serving in the Vietnam War. He developed neuropathy in his feet, which results in terrible pain. 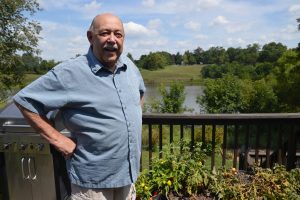 Ken Douglas smiles proudly after saying since he’s began taking CBD, the neuropathy in his feet has improved greatly. “I think other people should know about CBD.” Douglas, 72, said. (Photo by Bobbie Curd)

“I was pretty much OK, as long as I had shoes on. But if I tried to walk barefoot, like on hardwood floors or even outside, I just could not do it,” Douglas said, and had a hard time finding words to describe the pain. “… Just so overbearing. I always had to have shoes on … I hated it.”

Douglas was exposed to nerve agents, but the VA Medical Center in Lexington told him they can’t pinpoint that his problems were caused by the exposure. “But I have been qualified due to exposure from Agent Orange — if anything develops from it, I’m automatically qualified for compensation. I’m on the Agent Orange Registry.”

He said he found out about CBD through an Advocate-Messenger article, as well as from a friend using it to treat symptoms of Parkinson’s Disease; Douglas saw first-hand how it was helping his friend with his shaking. “That’s what kind of turned me on to this. I didn’t have any expectations whatsoever, just wanted to try it.”

Douglas was shocked by the results; he still is. After he began using it daily — he takes two .5 milliliter doses a day of cannabinoid oil he buys from Central Kentucky Hemp — his neuropathy pain was gone.

“I can run around all day barefoot, and let me tell you, it was a big ‘wow’ on my part. I still have trouble believing it. It was almost immediate, very quick.” Douglas said he had so many doubts, he even quit taking it for a day or two as an experiment; he said the pain came back.

“Well, I’m blown away. I have trouble accepting it,” Douglas repeated. “I got to, because it worked.” He said he wasn’t hesitant at all to try the cannabinoid blend.

“My blood pressure seems lower than it used to be,” Douglas said. He pulled out a chart he made for himself, showing the levels of pain he documented, compared to the dosages he took.

His wife, Sandi, also uses a CBD salve for arthritis and other joint issues. They also treat their dog, Sophie, with it, who is very nervous of car rides and around new people.

When Douglas found out about how CBD has been used to treat childhood epilepsy and other conditions, he said,  “I’m all in favor of it if it can do that. I know what it’s done for me.”

“Since I’ve come back, I’ve been diagnosed with PTSD, been seen for depression, all kinds of stuff,” Bill Noelker said. A Danville attorney who has become involved in the hemp industry, Noelker said he wasn’t a bit hesitant about telling his story. “It’s important. People need to know.”

He flew in Desert Storm during the Gulf War, and it “affected me to such a great degree, I would have nightmares. I’d wake up screaming and crying. Mary would ….” Noelker trailed off as he looked over to his wife, shaking his head. “It was bad. I never, ever woke up rested.”

Then he became involved with HDR Farms in Mercer County as its attorney, and met one of the owners, Danny Plyler, “another disabled vet,” Noelker said. ‘He told me I needed to try CBD, and that’s how I got involved. It’s absolutely changed my life.”

Noelker has been using the oil for about six months consistently, making sure to take the same amount each day. “My depression is under control. I’d been on medication before — still am. But nothing has helped me to the degree this product has.”

Noelker said simply put — he’s a fan. “That’s why I’m such a cheerleader of it, because I know what it did for me and how it changed my life …” plus others in his family, like his wife and niece, Rosemary Cook.

“People say it hasn’t been studied, I get that. But when you have people every day … say, ‘look, I was skeptical, and I took this and now my pain is gone, or now it’s not as bad as it was, or now I’m sleeping at night.’ There’s something to it.”

Mary Noelker, who owns Central Kentucky Hemp and creates compounds for her customers, said she’s heard stories about what some doctors are saying about CBD.

“A man told me he asked his doctor about it, and he was told he ‘may as well take snake oil.’ I said ask your doctor how many plant-based medicines he writes prescriptions for every day,” Mary Noelker said, adding that CBD is plant-based. “And then, ask him how many opioid prescriptions he writes. Which is the real problem.”

“I’ll say this: the nightmares that I was having were not stopped because of a placebo … And I believe in the placebo effect, but this is not it. This is real. I sleep through the night, I get up and I’m rested. I don’t scream out at night, or wake up crying. It has literally changed my life. I’ve been through counseling, medication, job changes. CBD has made a dramatic difference — and that’s how I know.