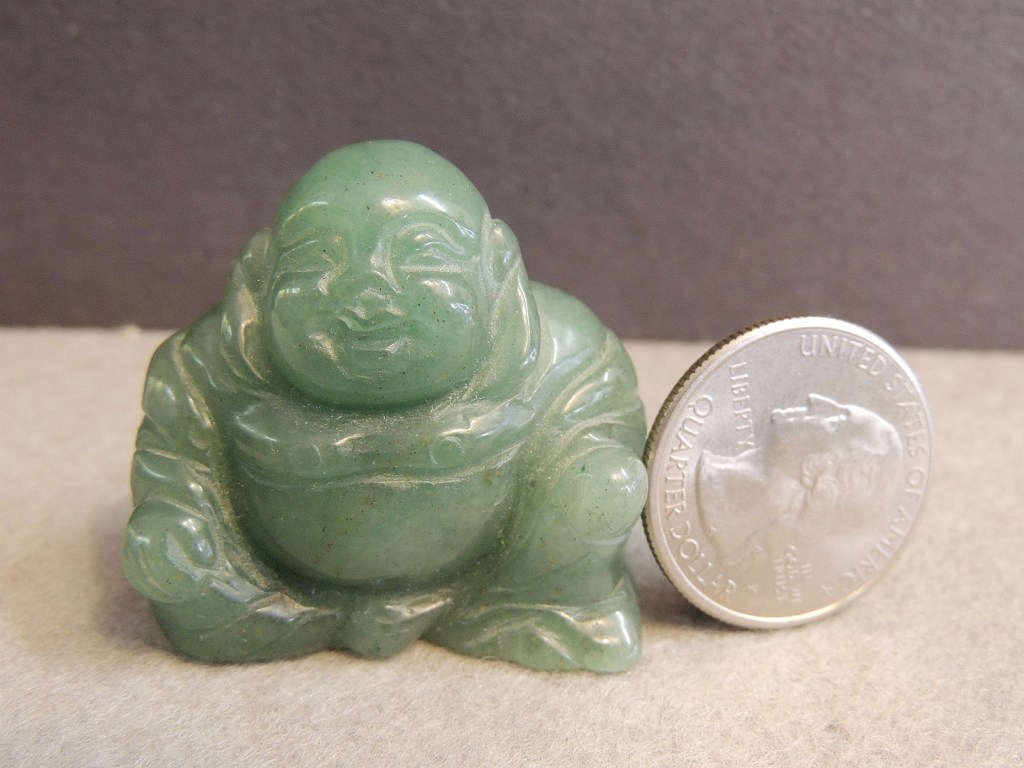 Question: I hope you can help me with this. I picked this up during the U.S. 127 Yard Sale this year. Pretty sure that it’s jade. I did the scratch test on it and no scratch! It’s a great dark green and is of the Buddha. Why are there, skinny Buddhas and roly-poly ones? I got this for $5. It was in a yard sale in a subdivision, and not from one of the dealers on the highway. They told me it was likely 100 years old. OK, what can you tell me about it? Thanks for all you do to educate us.

Answer: What a sweet piece that you happened upon. He is jade. Jade is a stone that has a hardness of about seven on the mohs scale — a hardness scale for gems and minerals. It’s been revered in Asia for thousands of years. It’s more valued than diamonds in many cultures. Jade is famous for its naturally green color, its smoothness when polished, its durability and its hardness.

Without making this a mineral and gem stone article, there are two types of jade. The first is jadeite, like your piece. Jadite has been mined commercially for nearly 1,000 years. For Asia, it was mostly mined in Burma, but can be found all over the world in small and large quantities. The other type is nephrite. Nephrite has been mined the earliest. It’s found in the most ancient of pieces. Though it’s early, nephrite is more basic in its color schemes, mostly yellows, whites, light browns and dirty greens. It’s often clouded and included.

It’s jadeite that is the movie star. It’s a stunning stone when well polished and carved, or

shaped. Its colors can range from pale to inky-greens, white, yellow, pinks and the gorgeous, and rare, lavender. There are also certain terms for blended or mottled colors that can be very rare.

It’s good that you did the scratch test on your piece. To those who don’t know, jade, when scratched with a steel blade will not leave a mark. But, please be careful and do this trick in a hard to see spot.

I like your Buddha, but I suspect that he’s been dyed. Jade under high pressure and heat,

with certain chemicals, can be made darker or brighter in color. I have my doubts about your 100-year date too. It’s a sweet piece, but I think that it’s more modern, maybe even the 1970s or 80s. His carving is fairly crude.

There are two Buddhas. The one that you have, the chubby, happy one, is not the founder of

Buddhism. He is a Bodhisattva or a Buddhist saint, named Pu-Tai. He was a Zen monk who lived in China in the 6th Century. He was known for his kindness and generous nature. He is often depicted as a protector of children, the poor and weak. Siddhartha Gautama, the founder of the Buddhist philosophy, is depicted as tall, lean and thin. So they are totally different people.

I think that you did OK, not great, but OK, on your little Pu-Tai figure. I think in a nice antiques or

Asian collectible shop he would be priced at about $25. Thanks for sharing him with us.