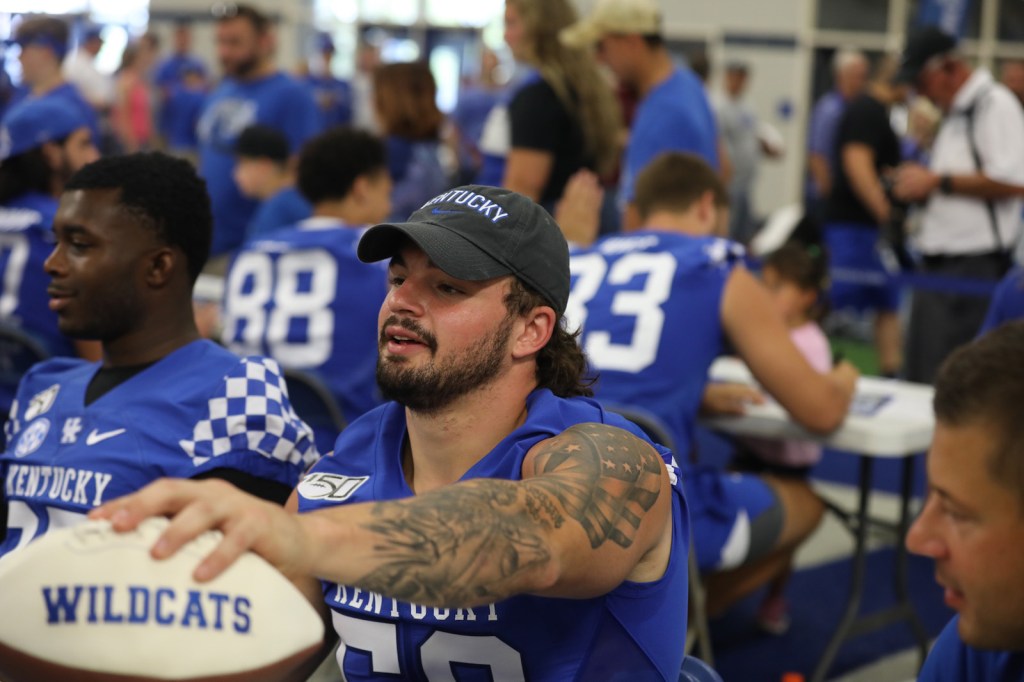 Senior linebacker Kash Daniel was popular at UK's Fan Day Saturday and admits he had a lot of soul searching to do after his sophomore year to become the preseason all-SEC linebacker he is now. (Vicky Graff Photo)

His first two years at Kentucky he played in all 26 games but linebacker Kash Daniel really was not much more than just a special teams player.

He admits it took some soul-searching to lead to the performance he had last season where he was third on the team with 84 tackles and ranked 24th in the SEC with 6.3 tackles per game.

“After my freshman and sophomore years I was kind of thinking beyond football at that point because I was just a special teams guy and didn’t have priorities straight in my life about what I wanted to do,” said Daniel, a U.S. Army All-American coming out of Paintsville in eastern Kentucky. “I was falling behind in school and a lot of things like that.

“It took a personal kick in the tail for me to say, ‘Hey, you got a lot of people counting on you and wanting you to succeed. You have got to want it more than what other people do.’ I changed my lifestyle, I changed my mindset of how I think.”

Going into winter workouts after the 2017 season, Daniel told UK trainers he wanted to change and become an all-SEC linebacker — a very ambitious goal based on his first two years at UK.

Not everyone can kick himself in the tail to change. Sometimes a coach can inspire an athlete to do that, but not every athlete has the discipline or drive to undertake the type of change Daniel did.

Obviously, one of those is a lot easier to do than the other one. However, Daniel was recently named a preseason all-SEC linebacker and plans to show he is that type of player.

“You have the path of least resistance (beer drinker) or the hard path (linebacker). I definitely chose the hard path and I am very thankful and grateful that I did that,” Daniel, who had 11 tackles in last season’s historic win at Florida, said.  “Not only has it helped me on the football field but it will ultimately help me off the field as well.

“I went to work from there. It’s all about keeping a healthy body, mind and spirit. Just going through that and being where I am now, it is pretty surreal but I did definitely envision it (being all-SEC and a team leader) after I made that switch (mentally).”