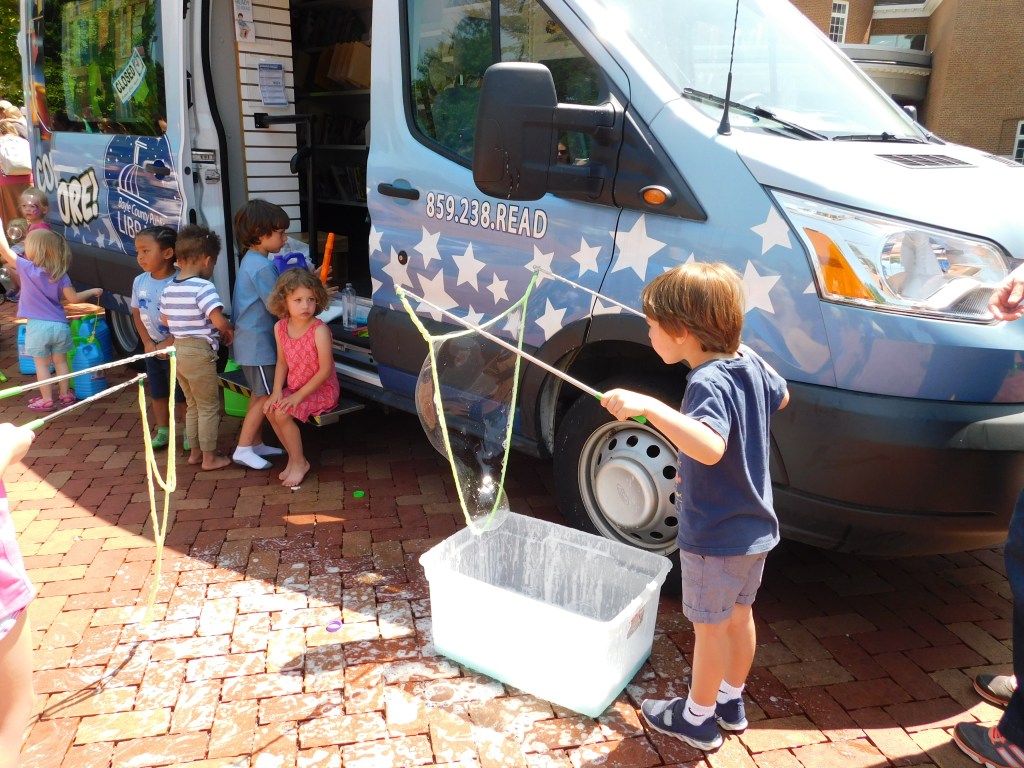 The Summer Reading Program, “A Universe of Stories” kick-off event in June had many activities including bubbles, an inflatable obstacle course, a visit from a Storm Trooper and bounce house. (Photo contributed)

This summer, the Boyle County Public Library brought “A Universe of Stories” to Danville during their annual Summer Reading Program (SRP). It started off with a space-themed kick-off party in June that included hot dogs and popsicles, face painting and bubbles, an inflatable obstacle course and bounce house, plus a visit from a Storm Trooper.

Hundreds of people stopped by for the party, and more than 3,100 people attended the free, entertaining and educational programs offered at BCPL and at SRP outreach locations throughout the summer. 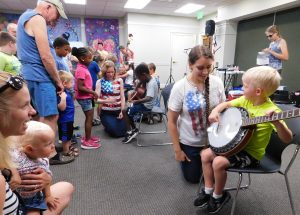 During the library’s Summer Reading Program, “A Universe of Stories,” there were many events in house and at other locations such as Junction City Elementary. Lafferty Pike, an all female blue grass band, performed a concert and held a instrument petting zoo for children and adults. (Photo contributed)

In addition to these special events, the library hosted numerous programs, including weekly science clubs and book club for primary school-age students; STEAM activities, crafting and book clubs for older students; and a murder mystery, writing workshop and movie series for teens and adults.

There were over 200 youth who earned the designation of “finisher.” Not only did they attend programs, but they also met the reading goal. Every youth who completed five chapter books or 20 picture books earned a free new book, coupons to attractions around the state and entry into the grand-prize drawing. The grand prize for youth was a new bike from Danville Bike & Footwear, sponsored by Webster Orthodontics.

Adults and teens were also encouraged to participate in summer reading. Of the 609 teen and adult participants, 88 finishers completed the reading requirement of five books or 10 hours of reading, and over 200 prize books were given away.

The most popular adult programs included Deep Sky Object Viewing and the Planetary Bath Bombs craft. Teens enjoyed a Stranger Things-inspired escape room. The murder mystery was a favorite event with both age groups. Monthly grand prizes for adults were an Amazon Fire 7 tablet and a telescope. Teen finishers were eligible to win a Visa gift card and a Galaxy Tab A for their grand prizes.

“This is the second year I’ve worked directly with summer reading, and I love it because of the buzz it brings into the library,” says Caleb Conover, public services librarian. “During the summer, we have more individuals with free time who are able to stop by for events and other activities, and it’s a pleasure being able to interact with everyone.”

In addition to the in-house events, the library visited with over 180 children at various locations in Boyle County through the Summer Reading Outreach program. Each week the outreach team traveled to twelve locations throughout Danville/Boyle County over the course of two months.

Special outreach event performances were also brought to Junction City Elementary and Toliver Intermediate schools. During their summer outreach visits, almost 1,600 books were given away, and a new telescope was awarded for the grand-prize winner.

Prizes for teens, adults and outreach were funded by the Friends of the Library, who also provided funding for book giveaways and special performance events offered at the library during SRP.

While this year’s summer reading program has come to an end, many programs will continue to be offered year-round. Weekly and monthly programs include storytimes, Lego Club, Beyblades Battle, STEAM Lab and Family Game Night. Baby Lapsit will resume in September, and the Kids Science Club and Kids Book Club will be held again in the near future.

Youth Services librarian Kinsey Hisle was pleased with the turnout during the summer and hopes the children and their families will keep coming to visit. 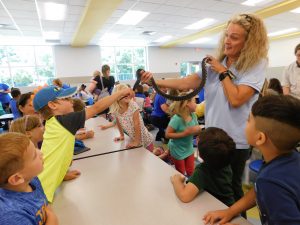 Inter County Energy had a presentation of reptiles and amphibians. (Photo contributed)

“We do more fun programming for each season, and offer special reading and library use incentive programs for kids during each school break during the year,” she says. The library also offers special programs during the fall, winter, and spring school breaks so kids can make the most of the library and its resources when they are off from school.

“Even more relevant during the school year than the summer, are all of our digital resources available for free through our website to help with school, including tutor.com, tumble books, KYVL, Scholastic Go, EBSCO Learning Express, and NoveList,” Hisle says.  During the school year, most library programs will be held after school hours, in the evenings and on weekends.

Adult and teen programs will continue to be offered year-round as well, such as Dungeons and Dragons, which has seen an incredible increase in participants. The library hosts themed movie series, writing workshops and is planning to offer a regular series of craft-related programs.

“We also hope to be able to continue running our live murder mysteries,” says Conover. “Our two most recent murder mysteries involved a local writer putting together a script and cast of live actors.”

Patrons are encouraged to keep a look out for special programs during Library Card Sign-Up Month in September, spooky programs in October, and the return of Family Movie Night programs. More information about upcoming library events can be found at boylepublib.org.