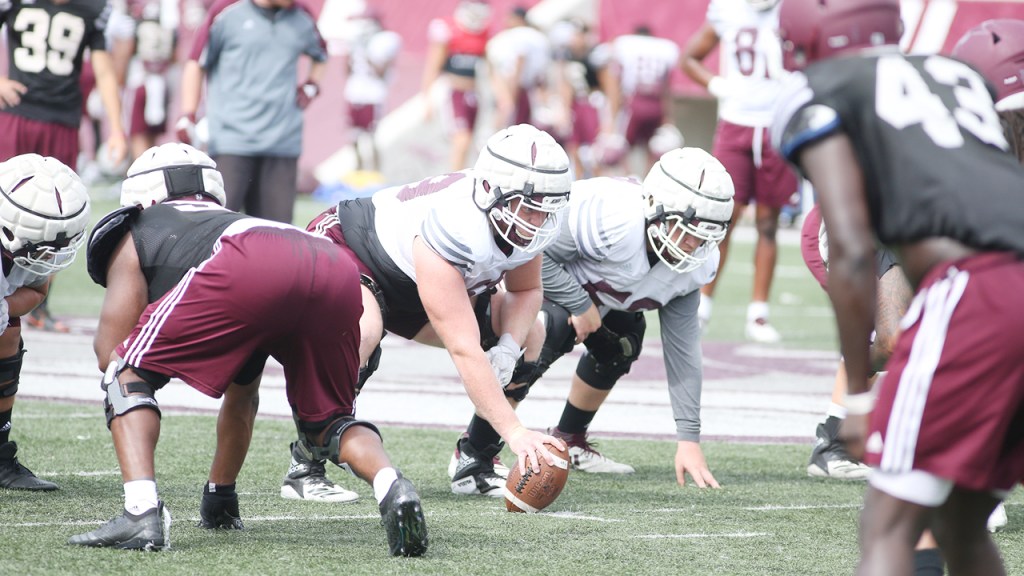 Redshirt junior Jackson Bardall provides an anchor as the center for the Colonels. (Photo courtesy of EKU Athletics)

RICHMOND — A deep and big offensive line looks to pave the way for the Eastern Kentucky University offense in 2019.

EKU has 18 offensive linemen on its roster.  The Colonels return two of five offensive line starters from a year ago, but all five players in the second position on the season-ending depth chart are back for the 2019 season.  Nine of Eastern’s offensive linemen have collegiate playing experience.

“We’re getting better and better every practice,” offensive line coach Danny Hope said.  “We’re gaining some momentum, not only as an offensive line, but as an offensive unit as well.  We put in a brand new offense in the spring so there’s been some growing and developing. We still have some things to iron out, but I like what I see.”

Redshirt junior Jackson Bardall (6-3, 301) anchors the line in the middle.  He’s been the starting center in 13 of Eastern Kentucky’s last 14 games. He helped the Colonels rush for 2,246 yards last season, the most in by an EKU team since 2014 and over 1,000 yards more than in 2017.  The other returning starter on the line is redshirt sophomore Tucker Schroeder (6-4, 295). He started all 11 games last year, including the final 10 to Bardall’s left side at guard.

“It’s huge for us right now, particularly with a new offense, to have a guy like Jackson in there,” said Hope.  “He always gives a great effort, along with being a heck of a football player. The center position, in my mind, is probably the second hardest position to play on the team.  Having a veteran center returning for us right now with a new offense is huge. We’ve had some other guys step up in that spot as well.”

Eastern gets immediate depth along the line from newcomers Eric Magwood (6-4, 303), Howard Watkins Jr. (6-4, 285) and Grant Polk (6-6, 303).  Magwood has 23 games of experience over the last two seasons at FBS Old Dominion. Watkins comes in with two years of experience at the junior college level and having earned All-America honors in 2018.  Polk played at FBS South Florida before coming to Richmond.