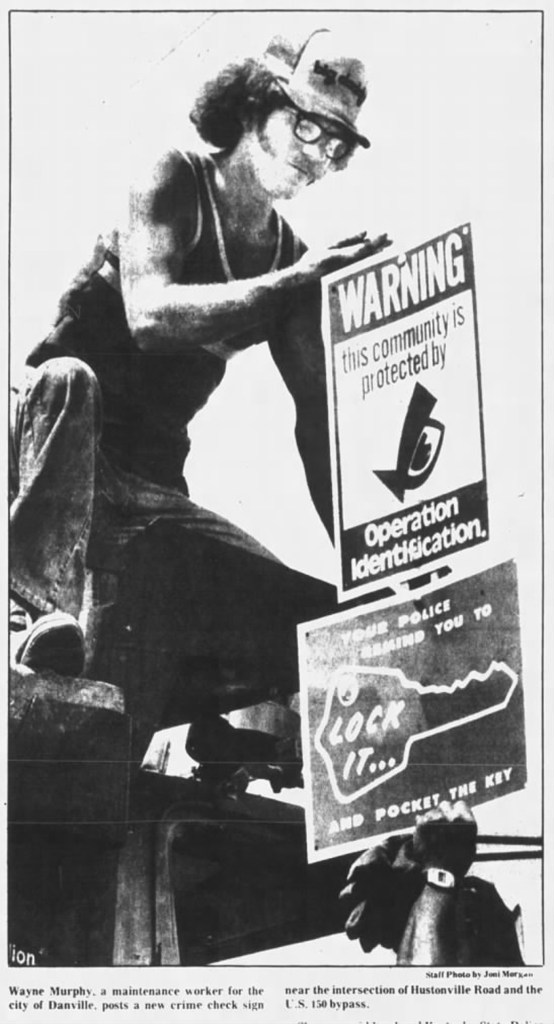 Wayne Murphy, a maintenance worker for the city of Danville, posts a new crime check sign near the intersection of Hustonville Road and the U.S. 150 bypass.(File photo)

On Aug. 13, 1982, a front page story told about how Danville Police were “warning” criminals to stay clear of town.

The Danville Police Chief 37 years ago was James Ryan Jr. He said the community was taking part in the state’s Operation Identification program, and other crime prevention programs were “just getting off the ground.”

The day before, city maintenance workers posted two signs for would-be criminals, according to the article in The Advocate-Messenger, which read, “Warning: this community is protected by Operation Identification.”

Police were also reminding people to lock their cars and “pocket the key.”

Chief Ryan said he hoped the signs, which were provided by the state, would have some type of deterrence of crime in the area. “It doesn’t mean we’re not going to get hit. It shows the city officials in the community are making efforts to fight crime.”

In the article, Ryan said other programs, such as Neighborhood Watch, was just getting started in Danville. Only two group meetings had been held — in Brenwood and Green Acres — and a third was scheduled for residents of Batewood Homes.

Ryan estimated between 12 and 20 neighborhood groups would have to be organized in order to include the entire city in the program.

The Operation Identification Program actually had begun four years earlier, but efforts to promote the program stopped just about six months after it began, Ryan said, and had been recently renewed.

Operation Identification consisted of marking personal valuables with the state’s initials. And unlike today, where people are told to keep their Social Security numbers out of the hands of the public, 37 years ago, people were being encouraged to put their Social Security number on their property to deter theft and assist in the recovery if their property was ever stolen.

Somewhere between 1,200 and 1,500 households had already used the police engraving tools for this purpose.

Because of the amount of bicycles that had recently been stolen in the community, police were placing a permanent numbered sticker on the frame of each bike and engrave the same number of the wheel rims. A permanent record of the bicycle was going to be kept at the police department for use if the bike was ever lost or stolen.

In another front page story, Danville police were reported to be using a new system for all station calls, which they said would “ultimately” help fight crime.

However, the program was not new. Police Chief Ryan said he originally asked the city commission to fund the project in 1981, but his request wasn’t approved because it was too expensive.