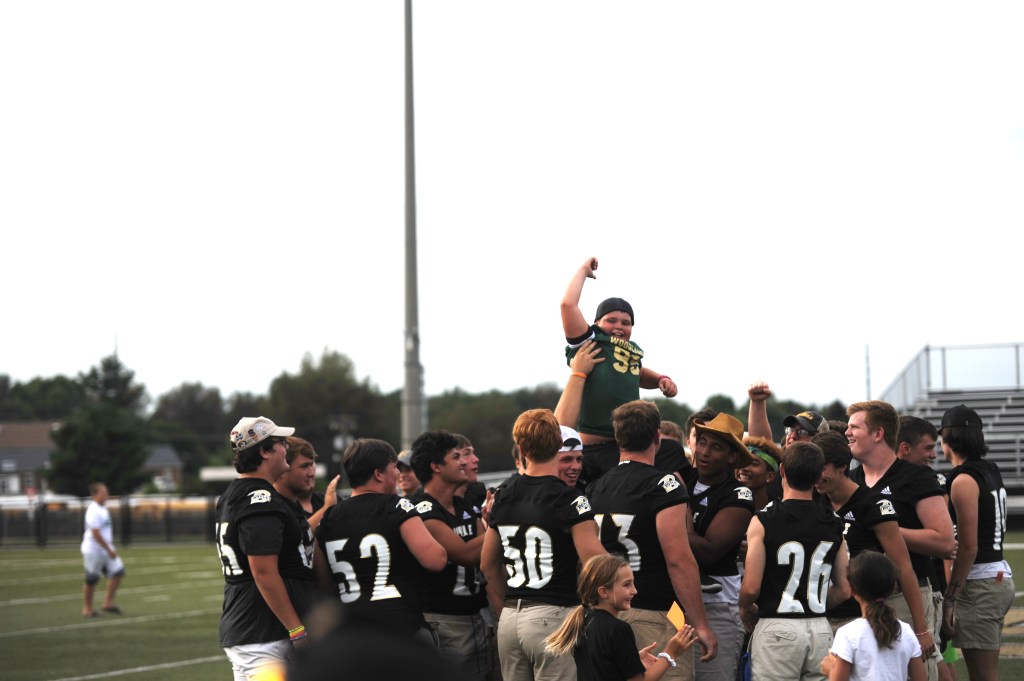 The Boyle County football team lifted up a member of the Woodlawn Elementary team in celebration after he won a dance contest. (Photo Derek Brightwell)

On Sunday night, Rebel Stadium was host to a festival in honor of the 2019 Boyle County High School football team. The Meet the Rebels event returned to the stadium after two years being held at a community pool, and represented a change in focus for the team.

“The point of Meet the Rebels is for the whole community to come out and see the team. When we went to the pool, not everybody was able to see us,” senior Ezarious Roller said about holding it at the stadium.

“We decided to bring it back here because we thought the people investing the most time and stuff should be able to have a fun night built just for them,” Reiley Colwick added.

The football teams from Boyle County Middle School and Perryville, Woodlawn, Junction City elementary schools as well as members of the Boyle County youth flag football program were invited on the field to take part in activities with the BCHS football team ranging from tug of war to hula hoop contests. There was also a Punt Pass and Kick style challenge where kids could show their arm and leg strength. But the big event was the dance off on midfield judged by the seniors. 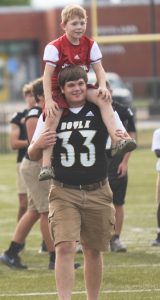 Senior Isaac Hardwick lifted a member of the Junction City Elementary team on his shoulders as he walked around the field. (Photo Derek Brightwell)

Overall, coach Chuck Smith was pleased with how the event turned on, not just by the fan support but by what his program was available to offer.

Reaching out to the younger kids who will one day be playing on the field at Rebel Stadium is something that is important to every member of the Boyle team.

“It’s just a great way to give back to our youth. A lot of the youth kids out here are going to be playing up here one day,” senior Wilson Kelly said. “They really enjoy it a lot. Interacting with them makes them a part of us, let’s them get closer to us. They love it to death and so do we.”

“It means a lot to me because I remember when I was that age and looking up to where I am now. I was like ‘I wish I was as cool as them’, and now I’m them,” Colwick said. “It’s just fun to see how they look at you when you talk to them. You have their full attention and I just think that’s really cool.”

The Rebels were overwhelmed by the support that they received from the fans in the community.

“I think it’s really exciting and shows you how important football is to this community. It’s always been important,” coach Chuck Smith said. “Ever since I first came here back in 1992 I could since the whole community wanted a great football program. This is just proof of it, every time we have some kind of event — be it this kind of showing or we go to the state championship game and set the record for attendance — that tells you a lot about the community and how much they love football.” 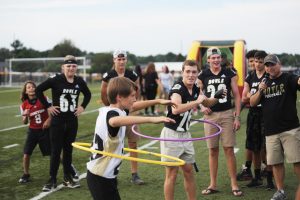 “This community is a big part of our football program. This kind of atmosphere right here is just a glimpse of what it’s going to be like during the season,” Kelly said. “Without our fans, nothing we do is possible.”

“It’s great. I’ve played at a few different high schools and coming here and experiencing this, it’s something completely different from what I’ve experienced in the past,” senior Grayson Rahbany said. “They just provide a tremendous amount of support to the football team and help us out in so many different ways.”

The night was capped off with a dunking booth where fans got to drop Rebels players and coaches in the water. Fans of all ages gathered around to watch as seniors Reese Smith, Reed Lanter and Landen Bartleson take the plunge after they were voted on by the fans. Then players volunteered to get dunked.

The Rebels will open the season against Iroquois High School at Mercer County on Aug. 24 at 5:00 p.m. Its home opener will come a week later, Aug 31 against Bullitt Central at 8:00 pm.