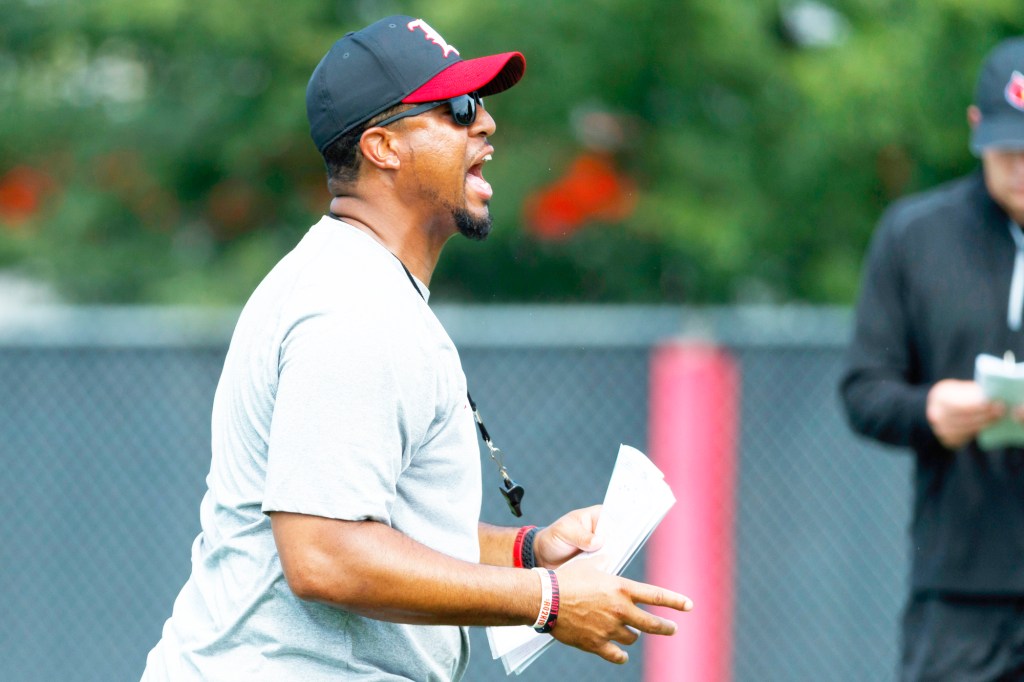 When Scott Satterfield was looking for assistant football coaches after he got the head job at Louisville he knew he needed coaches who would understand the schemes he wanted to use.

Former Danville High School football player ShaDon Brown turned out to be one of those assistant coaches he needed and hired.

“The things he has done in his coaching career scheme-wise are kind of what we do defensively,” said Satterfield. “He understands how it fits. He understands how to coach that scheme. We wanted to bring somebody in here that we didn’t have to kind of train in what wanted X and 0 wise. He already knew what we wanted.

“We didn’t have to coach him up about here’s what we want the safeties to do. He was able to come in here and hit the ground running with guys from the start, and that was important with the work we have to do.”

Brown is coaching safeties at Louisville after spending the previous two seasons at Colorado where he was defensive passing game coordinator in 2018. Before that he coached cornerbacks at Army in 2016 and was at Wofford College from 2011-15 where he coached cornerbacks for four years before coaching safeties his final season there. In 2015 he also participated in the NFL’s program for minority coaches by interning with the Super Bowl  runner-up Carolina Panthers.

“Just defensively I have been around him a little bit,” Satterfield, who had been the head coach at Appalachian State, said. “I hired a guy from Wofford College, Nate Woody, who introduced me to ShaDon. I kind of followed his career the last few years. We needed a good safety coach and ended up getting him in here and feel lucky that we did.”

“He’s easy to work with. Me, I am all about camaraderie of the staff and having guys with no egos that work well together and are all in this thing together. He fits right in that mold,” Satterfield said. “The fact he is from Kentucky and we were able to bring him up here to help us recruit the state was good for us. Good family, just fits in what we want in our staff.

“He is well respected by everybody. He knows the high school coaches and has been one himself. He has been around but the way he treats people is sincere. I think people respect that from him. He has been a good fit for me not being in this state and not having worked here. He has kind of helped to introduce me to some people and help our staff in that respect quite a bit.”

After Satterfield hired Brown, one of his first recruiting trips in Kentucky was to Danville with Brown where he “met with a couple of different high school coaches” at Danville and Boyle County.

“That was neat. Good tradition there for our sport,” the Louisville coach said. “Good football and good players.  Hopefully we will be in there every year and try to get some players out of there because you could tell football is really important in that town.”