Soul of 2nd was a success 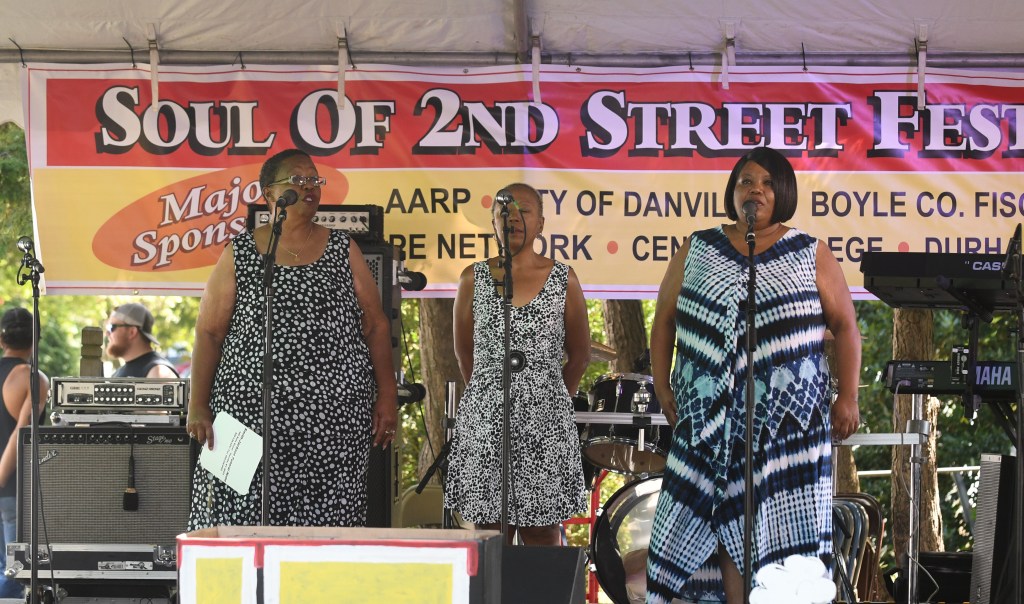 The Davis Sisters perform during the Soul of 2nd Second Street Festival on Saturday. (Photo by John Scarpa)

The Soul of 2nd St. Festival started off Friday with a trip down memory lane and ended Saturday night with dancing in the park. 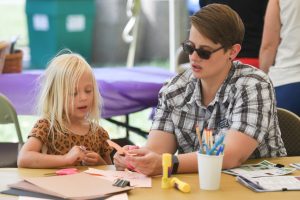 Hazel Knoll, age 4, and Brittany Smith trace out hands to make a wreath during the Soul of 2nd Second Street Festival Saturday. (Photo by John Scarpa)

Michael Hughes, who took over organizing the festival after The Heart of Danville pulled out of sponsoring the event, gave an informal presentation with photos showing a few of the African-American businesses that thrived in and around Second Street, including four cab companies and the popular Chicken Shack restaurant. He also shared stories about a poolroom, barber shops, grocery stores and a theater that were located in the business district.

He ended his presentation reminiscing about the buildings that were torn down during Urban Renewal. He said if the buildings were still there today, someone estimated they would be worth about $1.4 million.

“We know what could have been,” Hughes said. It’s important that African-American youth know the Second Street business history which may influence them to go into business for themselves, he said.

Dr. Andrea Abrams and Frank X Walker were keynote speakers for the conference.

Abrams, associate vice president for Diversity Affairs and special assistant to the president, associate professor of anthropology, African and African-American studies, and gender studies at Centre College, gave a presentation on the impact of African-American businesses over the past 200 years throughout the United States.

Midwifery and funeral homes were two of the first African-American businesses that “participated in the economy,” Abrams said. “So what happens when you concentrate these kinds of entrepreneurial skills in a place? Then you get something like Second Street.”

The “golden age” of African-American business owners was between 1900 and 1930, Abrams said. She also gave examples of several historic African-American communities and cities that were once thriving.

She said it’s not Urban Renewal practices that’s the downfall of African-American businesses, but gentrification. 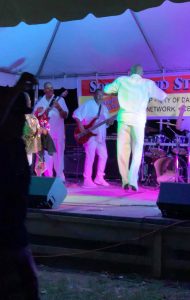 He said growing up in Danville and being around Second Street has influenced his writings.

In the two fiction books he’s written, he talks about the people living and working in Needmore, Chicken Bristle and Clifton.

“The idea of being involved in the economy is not a new idea,” Walker said.

“If you count how many (African-American) businesses … then compared to what we own and run now …” Walker said as his voice trailed off.” “Renewal, I think Urban Removal.”

Looking at the old black and white photographs that Hughes had shared earlier, Walker said, “Those photographs will reconnect us to a space that we can reclaim. It’s up to us how we raise our children and our children’s children and give them that vision again. To help them see their own potential just by looking back.”

The 2019 Lifetime Achievement Awards were given to Leon Gooch and Rev. Everhart Walker. The 2019 Griot Awards were given to Mary Gary and Albert Lee Taylor. According to the event program, the award signified “those whose oral histories and published works have greatly influenced the work of the Danville-Boyle County African-American Historical Society. Among western African

tribes, griots were responsible for keeping and sharing the oral history and traditions of their village.”

For Saturday’s events, Hughes said he believed this year’s crowd was “the biggest we’ve ever had,” and estimated between 2,500 and 3,000 people came to Constitution Square Park for the festival to hear the music, visit with friends and dance in front of the stage.

In previous years, The Heart of Danville had been able to give several thousand dollars to help sponsor the festival, Hughes said. But this year it pulled out of sponsoring the event because of cuts to its budget. However, the Heart still provided help with the festival on Saturday.

The Heart suggested that Hughes continue the festival with the help of the Danville Boyle County African-American Historical Society, Hughes said. So he sought donations from individuals and businesses.

Because of the public’s generous support for the festival, he was able to “raise more money than the Heart had ever given it,” Hughes said. So much, in fact, that he said he has a nice sum saved and is already starting to plan for next year’s Soul of 2nd St. Festival.

Hughes said, “Great relationships have been made.

Attendees participate in arts and crafts under a tent during the festival. (Photo by John Scarpa)

Hazel Knoll, age 4, and Brittany Smith trace out hands to make a wreath during the Soul of 2nd Second Street Festival Saturday. (Photo by John Scarpa)

Brian Hutzley and Jamee Peyton were still working hard on the grounds of Constitution Square Park, even after the Soul of 2nd St. Festival ended. (Photo by Bobbie Curd)