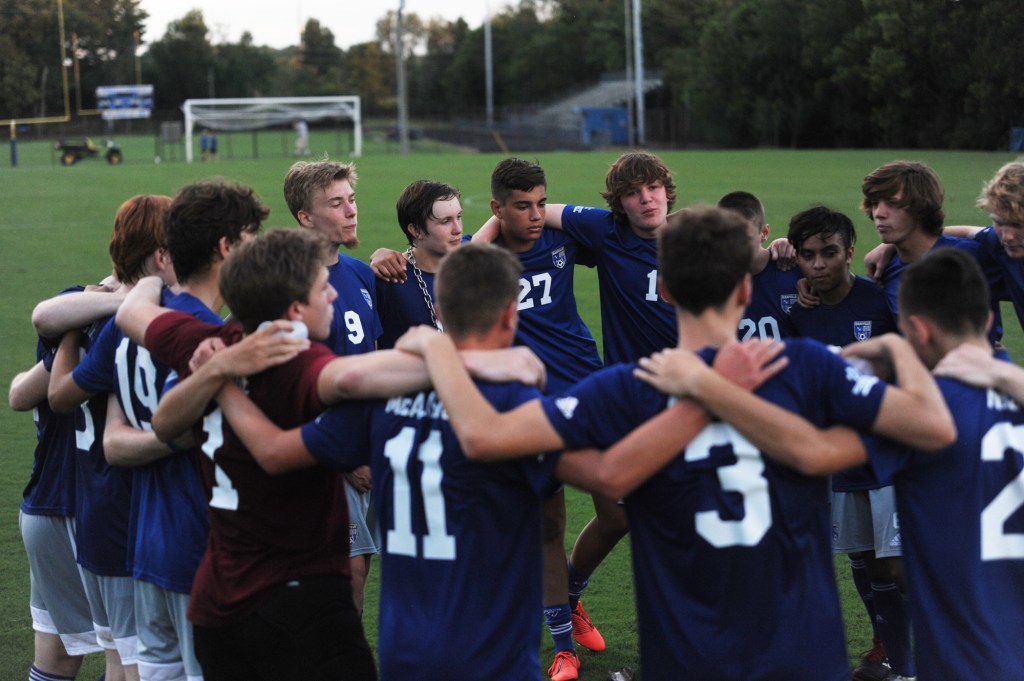 After the victory, the Admirals sing the fight song to the crowd. (Photo Derek Brightwell)

Last year, the Admirals came up short in the 12th region championship. Going into this year, coach Brent Beauman liked his team, and said that it was an important year for his seniors to finish what they started last year.

That began Tuesday when the Admirals bested the Eagles.

“Preseason is so long and it’s just grinding and you got practice and two-a-days and there’s no real — you know, everyone wants to play a game,” Beauman said. “It’s always good to get into the season and the first game. See if what we’ve been doing is going to work or not.”

The Admirals first goal came off an assist from school assist leader Briar Sanders as he gave it to Ryan Clarkson for the score off of a combination play.

“It was something that we practice all the time and it’s such an easy way to score,” Beauman said. “They try to do things differently at times. So that was a perfect goal.”

The second goal came off of another Sanders assist as he shot a ball that popped out and Gabe Cisneros played it off a defender for the score.

Sanders got a penalty kick to make it 3-1, which was the final score.

For his efforts, Sanders was named the player of the game and got to wear the Admiral Chain, which Beauman started last year after seeing it at the collegiate level. 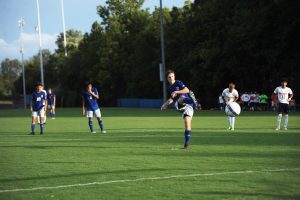 Senior Briar Sanders making a penalty kick for the third and final Danville goal. He also assisted on the other two goals. (Photo Derek Brightwell)

“He picked right up from where he was last year,” Beauman said of the senior. “We’re hoping for him to be a 20-20 type. He’s got the motor, got the speed and got the skills… “In the second half we wanted him to take over the game a little bit. He probably shot a few more than he would have normally. Just trying to feel him out and figure out — if it came to it — who can take over and take charge.”

Sanders enters his senior year already as the school’s all-time leader in assists, and holds the record outright for assists by a sophomore and a junior as well as being tied for the freshman record.

“He just doesn’t look that fast. He’s so calm and laid back and that’s his personality. He’s so fast and so calm with the ball and that gives him the opportunity to find the open players and hit that pass that’s needed,” Beauman said. “It doesn’t matter if you’re passing it to me or to Pele, he’s going to play the right ball regardless of who it is. When you play that way, you get in the habit of hitting the pass and not looking for specific players. It just makes him such a good teammate to have… Lots of college coaches have talked to me about him through the years. It’s his calmness with the ball that does it.”

In the second half, with a two goal deficit, Southern started to press the attack more. Beauman liked how his responded, but — as coaches often do — feels like the Admirals could’ve done more. 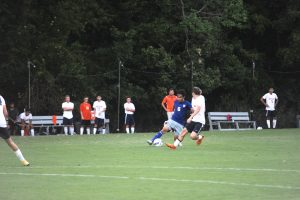 Senior Gabe Cisneros jukes a Southern defender. He would score one of the three Admiral goals. (Photo Derek Brightwell)

“There’s lulls in the game and you just get hypnotized by it and that’s typically when a team can flip the momentum on you. Transition was how they got their opportunities. We’d either hit a bad pass or something and we didn’t immediately switch the defense. Overall we did a good job in getting back and covering and of course Keeton (Burnside) is amazing in goal. It’s great to have a keeper like that but almost at times you’re so comfortable knowing he’s going to make the stop that sometimes they may not make the play. You’d much rather have a goalie like that, though.”

Southern fans let the referees know what they thought of the calls throughout the game, and it wasn’t positive. Beauman actually enjoys that from the fans, to an extent.

“A lot of noise. It’s great though because people are so passionate about soccer. It’s gotten better because fans — more people are playing the game and watching the game — the comments make a lot more sense now.”

He also doesn’t mind the physical play, and coaches his players on it.

“Play physical, play hard. If you get hit, you get up and keep playing. That retaliation and getting angry — that’s just how the game is played,” he said. “You’re not going to get every ball. You’re going to get kicked and hacked and pushed down. Just get up and keep going. That’s life. Something’s going to get in your way and you can either get upset or figure a way around it and beat it.”

Overall, he’s happy to get out of the first game of the year with a victory and happy with how his kids handled themselves on the pitch.