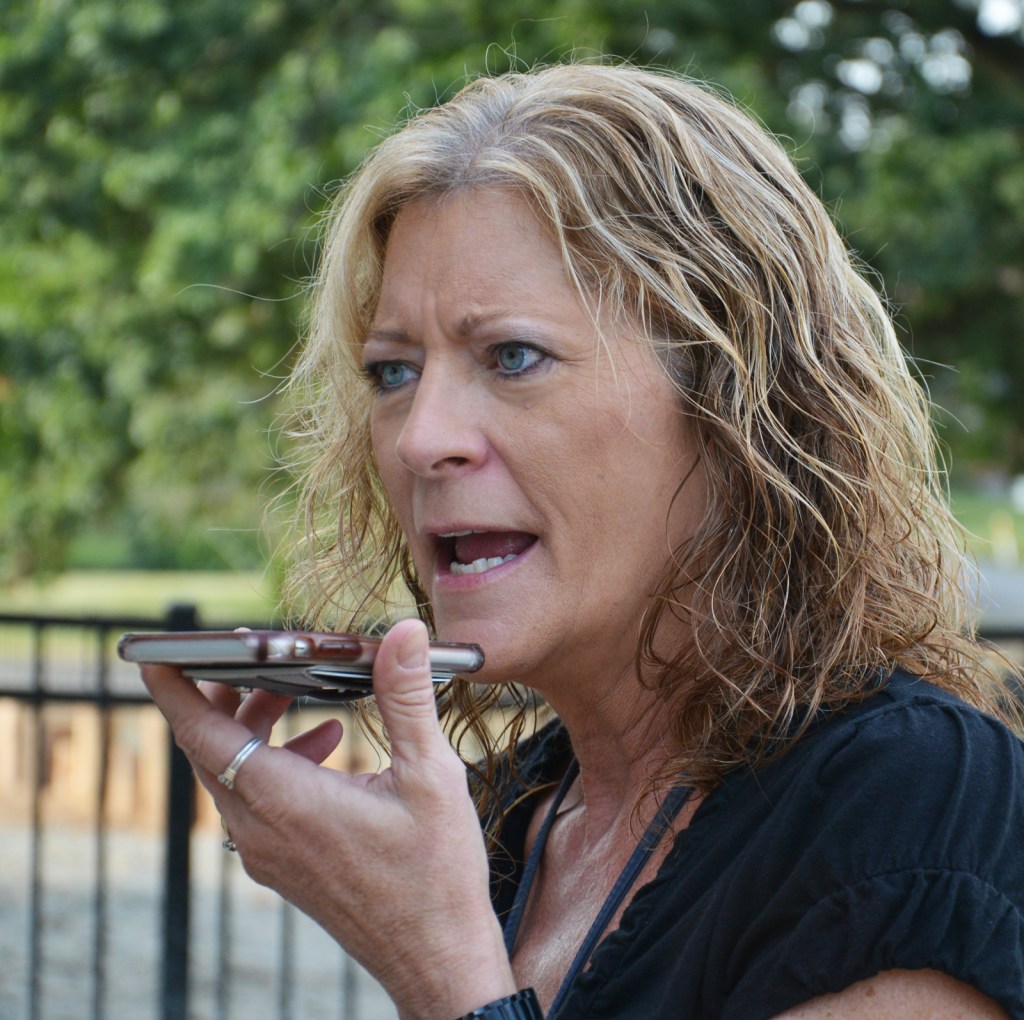 Christy Denny talks to someone who was asking a question about the move at Hogsett Primary School last week. (Photo by Robin Hart)

Christy Denny started her career as an English teacher at Lincoln County High School and is now managing multimillion dollar projects for the Danville Schools. 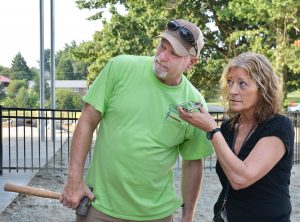 Christy Denny holds her phone for Keith Bustle as he listens to instructions from his supervisor.(Photo by Robin Hart)

This past Friday, Denny was wearing flat shoes and a black a white striped skirt, making her easy to spot in the hallways crowded with teachers and staff who were moving boxes from trailers into the the new Mary G. Hogsett Primary School.

With a phone in one hand, a marker in the other and a set of keys hanging from a lanyard around her neck, Denny was in the center of activity because she is director of administration services and facilities for Danville Schools.

As she was constantly asked questions — where were boxes to be unloaded; which pile to use for stacking them; could a door be opened wider; were there more dollies … — Denny answered with a calm, self-confident demeanor of someone who knew exactly how to manage the situation.

On Saturday, Denny was back at the school. A device counted her steps and she found out she had walked more than nine miles giving people directions and helping teachers locate whatever they needed as they moved into their new classrooms.

Before coming to the Danville School district in 2016, Denny taught English at LCHS for 13 years; was a library media specialist for seven years, then assistant principal for 10 years.

As a teacher and librarian, Denny said her focus was on the students’s academic success and school improvement. When she was assistant principal, Denny’s responsibilities expanded into managing facility maintenance and school safety, as well as managing teacher instructional support and student behavior management.

“I was intrigued with the idea of how to make things better, easier or faster to keep up with this wide variety of daily tasks, not only for me, but for the staff as well,” Denny said.

She took several trainings in systems processes to develop those skills, and in 2016, Denny became Director of Facilities and Maintenance at Danville schools where she has developed ways to make both departments more efficient, she said.

Denny has overseen five projects simultaneously this summer: the Hogsett renovation and expansion; construction of a softball field; renovations of the new central office building and relocating all of its contents from the old office; roofing DHS; and HVAC replacement at John Bate Middle School.

“It’s been a rush of non-stop tasks.”

“I cut my teeth on the Toliver construction project,” Denny said, adding that she had no construction experience at that time. “I was hired when the Toliver project was about halfway complete and I was able to stand back and just learn what I could. That project was supervised by Ed McKinney, and he has been a super resource for me.” 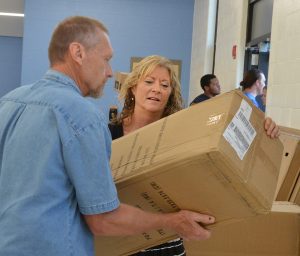 Tim Dodds, custodian for Hogsett, and Christy Denny decide which classroom a box should be taken to. (Photo by Robin Hart)

Denny said she’s learned a lot about the construction field and “I have also had to learn how to meet the paperwork requirements with the Kentucky Department of Education. I can’t be out in the field all day overseeing a project, unfortunately. I have to provide quite a bit of information and documentation to KDE and it can be time consuming as well as confusing.”

While supervising the maintenance and facilities projects for the school district, Denny also oversees the budgets for the departments.

“These budgets do have some categories for major issues that may occur during the school year such as if an HVAC unit bites the dust. If I’m lucky enough to have money left over, I earmark it for something we have been waiting to do.”

Denny said one of the hardest aspects of her responsibilities is “knowing what needs to be done, but not having the time or budget to do it immediately. Some things just have to wait.”

She said it’s been “a bit different for a woman to oversee facilities, and I was a bit apprehensive at first.” But she was ready for a career change when she took the job.

She works with the maintenance and custodial staff, and administrators, as well as with architects, engineers and contractors.

The best part of her job is “how appreciative the staff members are when we improve their buildings or their classrooms or their offices.”

Denny said there are always projects waiting to be tackled, and she has her eye on two in particular: the auxiliary building behind the high school that’s primarily used by the football team and trainers; and the Gore House, located on the school property off of Proctor Street.

“Both buildings have historical importance and I want to preserve as much of that as possible.”

After finding her keys, Christy Denny rushes back to help volunteer movers know where to put boxes.(Photo by Robin Hart)

Christy Denny and Brittany Broach try to locate more dollies for the move at Hogsett Primary School on Friday. (Photo by Robin Hart)

Christy Denny explains to Billy Curtsinger where the stacks of blocks are to be taken. (Photo by Robin Hart)