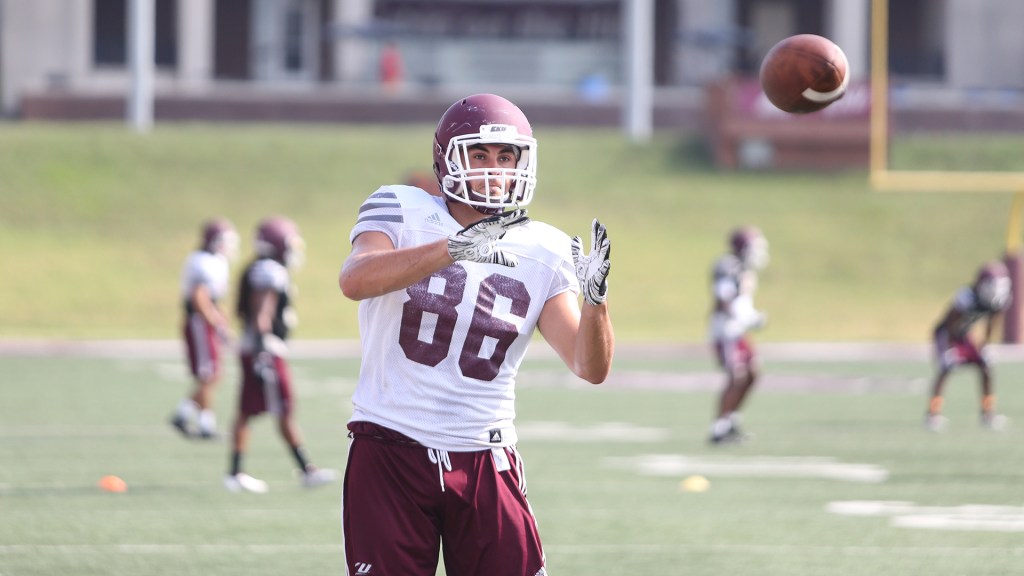 Paul, a first team All-Ohio Valley Conference selection, caught 20 of the 24 pass completions to tight ends during the 2018 season.  Five of those were the only touchdown receptions made by a tight end.

The tight ends are under the direction of new assistant coach Troy Rothenbuhler, who spent the 2018 season with the NFL’s Arizona Cardinals.

Adam Valiga (6-5, 242) started three times, including the season-finale, during his first season as a Colonel after transferring from the College of DuPage.  He played in all 11 games and caught two passes.

Redshirt sophomores Collin Sanchez (6-4, 245) and Ethan Bradds (6-5, 242) both played in all 11 games last season.  Bradds made his first collegiate start against No. 8 Jacksonville State. His lone reception of the season was a 26-yarder against Morehead State.

“The guys are working hard, we’re ready to go,” Rothenbuhler said.  “They’re doing an extremely good job. We’ve got a lot of competition in the group, so it cranks up their level every day.  It gives those guys a chance to compete for a job on a daily basis.”

That trio of returning tight ends is joined by newcomers Christian Vinson (6-5, 245) and Malik Owens (6-5, 250).  Vinson is a redshirt senior and joins the program after spending the previous two seasons at Florida International.  Owens is a true freshman who averaged 22.7 yards per catch his senior season.

The group of 17 includes 13 players with collegiate experience, four of which are fifth-year seniors.

“We’ve got to be able to take over the line of scrimmage as a front four,” first-year defensive line coach Jesse Williams said.  “I’ve been impressed by their readiness to work and attention to detail. These are the dog days, but this is the time when teams separate themselves from being a mid-level team to being a great team.  Great teams find a way to work to make each other better.”

The nation has recognized the talent of redshirt senior defensive end Aaron Patrick.  He is on three preseason All-America teams and is one of 25 players from across the nation on the 2019 STATS Buck Buchanan Award, the national defensive player of the year award.

The Dayton, Ohio native was a first team All-Ohio Valley Conference pick and ranked second in the league with 0.68 sacks per game a year ago.  He finished the season with 53 tackles, 12 tackles for a loss, 7.5 sacks, 15 quarterback hurries and one pass break-up.

The conversation might start with Patrick, but it doesn’t end there.  Eight players on the season-ending depth chart, including all four starters are back for the 2019 season.  Redshirt sophomore Tre Turner manned the other end spot in 2018. Redshirt senior Elijah Taylor and junior Leonard Humphrey started in the middle of the line.  Redshirt sophomores Brian Lassiter and Nakiya Smith, redshirt junior Dillon Denault and redshirt senior Taquan Evans owned spots on the depth chart last season. 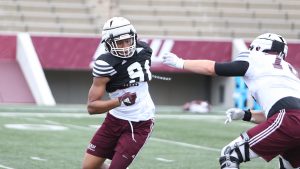 Tre Turner, along with Aaron Patrick make up a formidable defensive front for EKU. (Photo courtesy of EKU Athletics)

“I think we have a special group.  Everyone knows about AP and everyone knows about Elijah Taylor, but there are other guys climbing fast,” Williams said.  “Tre Turner is having a really good camp. Taquan Evans is having a good camp. Quinten Floyd is coming on strong. I can’t say enough about the inside guys.  There’s a couple new techniques we’re working on to take it to the next level.”