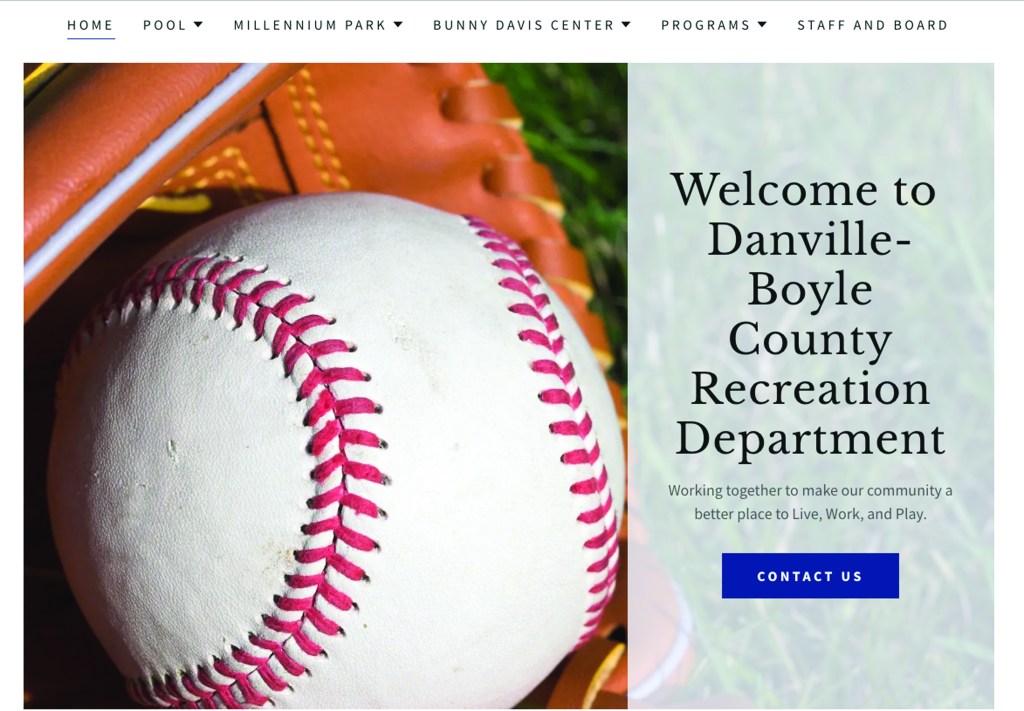 The new website design for Danville-Boyle County Parks & Recreation went live Thursday at www.danvilleboylecoparks.com. Come October, Director John Bell says the site will allow users to register and pay for programs. “By next spring, the public will have the capability to rent facilities online, as well,” Bell said.

To say there has been some controversy surrounding the local parks system would be an understatement, especially to those who are involved. But hopefully —  now that the Boyle Fiscal Court has followed suit with the City of Danville and finalized its ideas on revamping the decades’ old ordinance on the books governing the Danville-Boyle County Parks and Recreation agency — some light is on the horizon.

And to keep that light spreading, Danville-Boyle County Parks & Recreation Director John Bell, now three months into the position, says he will do everything within his power to keep the flow of community-oriented events ongoing.

He says staff has scheduled one “Community Day” per month, where some businesses and organizations have agreed to sponsor a give-away, which is held in area parks.

“Monday, we will be celebrating National Ice Cream Day at Michael Smith Park, by the new Second Street bridge,” Bell says. This event is sponsored by Denise Terry with Guerrant Realty, and All Around Home Repair. Two-hundred ice cream cups will be given away.

The events are aimed to “bring people into the parks — a way for the public to meet their neighbors and experience a different park in our community,” he says.

Previous Community Days included hot dog giveaways and bomb pops. “These little special events are a way for the public to meet their neighbors, and experience a different park in our community,” Bell says.

And Bell says that for any area business or organization who wants to jump on board and help sponsor the events, the cost is $300. “Depending on what it is we’re giving away, that could spread to more than one event.”

Flyers are posted around town, and for everyone who attends and brings a flyer, they get special discounts off of Parks-related offerings, such as $5 off a dance class, baseball or softball sign-ups. “It’s just something to expose you to other opportunities we have, hopefully get more and more people involved with our local parks.”

In other Parks news

This week, at both the city commission and fiscal court meetings, Bell introduced Evan Teague, a familiar face who will move into a new role with the agency. Bell told both bodies of government that in the wake of employee John Cocanougher’s passing, “The significance he had in this community — we can’t replace him.”

And, the parks board agreed with him. So, instead of continuing to search for a new program coordinator — what the late Cocanougher did for years on a part-time basis — Bell created a new, full-time position of recreation supervisor. He hired Teague for the job on July 22.

Teague began with Parks & Rec in 2013, as the assistant maintenance supervisor. Now, Bell says he will be responsible for all of the athletic programs, as well as charged with developing and planning new programs and special events.

“Evan is working on new youth and coach’s clinics for baseball and softball for the spring of 2020. He is also working on a High School Skills Showcase Camp for high school athletes,” Bell said Thursday. “We both have the desire to expand our current programming, and to include additional training for the volunteer coaches.”

Also, on Thursday, the new Danville-Boyle County Parks and Recreation website went live at  www.danvilleboylecoparks.com. Bell says it’s a more interactive site, which has been reformatted with updated information about ongoing programs.

“It’s more user-friendly, and beginning in October — this will be the next phase — you will be able to register for programs online and make payments for programs. By next spring, the public will have the capability to rent facilities online, as well,” Bell said.

And, Bell said, the public can keep track of Parks & Rec Community Days by logging onto the site, as well.