Local jazz troupe will perform for Lunch with the Arts

The Art Center of the Bluegrass (formerly known as the Community Arts Center) invites you to get in the groove on Wednesday, Aug. 21, with Blue Groove Jazz. Making their first appearance at Lunch with the Arts, the group’s presentation will include selections from a variety of jazz styles.

Blue Groove Jazz was formed over five years ago when members Mark Gardner, Sam Carr, Eben Henson and Pete McCaffrey discovered they all had an appreciation for the great classic jazz of the be-bop, post be-bop and cool jazz eras. 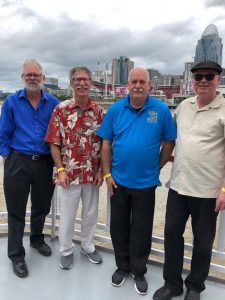 Blue Grooze Jazz was formed five years ago by, from left, Mark Gardner, Eben Henson, Sam Carr and Pete McCaffrey. The band will present selections showcasing a variety of jazz style at Lunch with the Arts on Wednesday Aug. 21.

Blue Groove also branches out into Latin jazz and Bossa Nova, as well as contemporary funk and smooth jazz. In 2019, Blue Groove’s performances have ranged from a Clearwater, Florida beach event to a Cincinnati Riverboat gig.

Three members of the band live in Mercer County. Mark Gardner is on keyboards. He began composing music at age 10, and received his masters degree in music from Webster University in St Louis, where he also performed professionally.

Sam Carr, on sax, also plays with The Advocate Brass Band and Powerplay, and is the director of music for the Ft. Harrod Jazz Festival.

Pete McCaffrey is on bass. Originally from California, McCaffrey has toured with the U.S. Coast Guard Band and has also been involved in musical theatre.

The fourth member, Danville’s own Eben Henson, is on drums. His drumming career spans over 40 years. He also plays with The Advocate Brass Band & Powerplay.

Henson says, “Generally, we are a little bit like a tribute band in that we try to play music that is from the era of bebop and post bebop. We try to give a sense of what that music is like.“

Beginning in the mid 1940s, younger jazz musicians began to move beyond the dance-centered Big Band style to music that was listening orientated, featuring a more complex and improvisational approach. In his article, “How the Rise of Bebop Changed Jazz,” Michael Verity writes, “… the 1940s saw a surge in smaller ensembles, such as quartets and quintets. Groups often consisted of one or two horns — usually saxophone and/or trumpet — bass, drums, and piano. By nature of being in a smaller ensemble, bebop shifted the musical focus from intricate band arrangements to improvisation and interaction. With a focus on improvisation, bebop allowed for an explosion of innovation.”

“We want to play a lot of different styles to show how jazz has evolved. When we play, expect a little of everything from traditional bebop, to modern jazz with some Bossa Nova, funk and fusion thrown in,” Henson says.