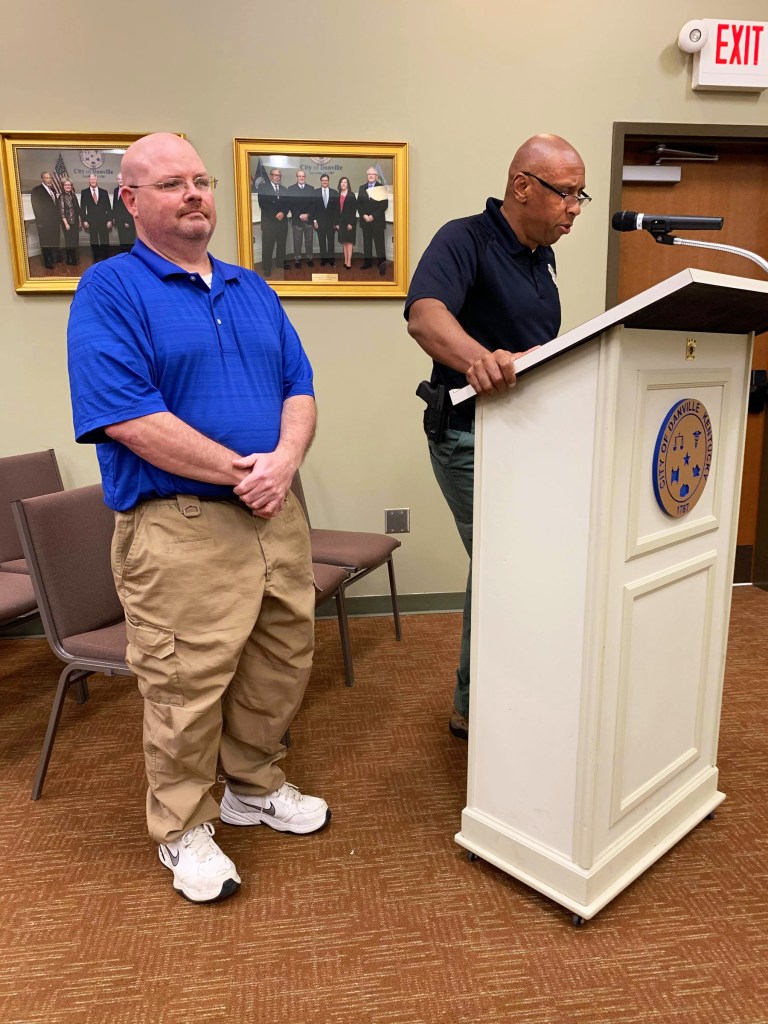 Retiring Officer Patrick McQueen, left, listens as Danville Police Chief Tony Gray explains what he's meant to the police department over the past 31 years. McQueen was honored Monday by the city commission. (Photo by Bobbie Curd)

Patrick McQueen, a longtime Danville Police officer, was recognized Monday by the city commission for his years of service. McQueen is retiring, after rising to the rank of sergeant detective for many years.

He stood quietly beside the podium, as Chief Tony Gray told the commission just how far the officer — and his friend — had come since beginning 31 years ago. 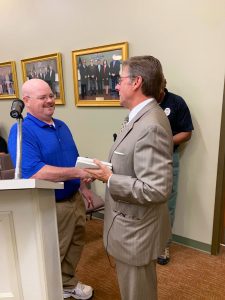 McQueen graduated from the Department of Criminal Justice training and began in Danville on April 1, 1999. Gray told the commission McQueen proved to be a quick learner; he was assigned to investigations and promoted to sergeant at the same time.

“He worked numerous cases. He’d work forgery at banks in the morning, then in the afternoon, he’d be working drug-buys with informants,” Gray said. He said McQueen worked many white-collar financial crimes, burglaries, homicides …

Gray said, “Pat had a strong desire to be good and thorough,” and cited his “excellence in presenting paperwork to the grand jury” in local and federal court cases as priceless. “We received many compliments about his paperwork, its completeness,” Gray said, which aided in successful cases.

The chief also got some ribbing in. “I like to tell a story about when we were hitting a house on Duncan Hill. Pat was supposed to be the first one going in, but he had a misstep, and ended up the last one,” as officers were forced to step on him to get through the door.

McQueen bowed his head and laughed as Gray told the story.

McQueen also became the leader of Danville PD’s swat team, a group that was trained by a Navy Seal.

Gray said he had many accomplishments, including completing four components of a career development program the state offers, earning certificates for each.

McQueen has stepped away the past couple of years from investigation, when he knew he was nearing retirement, and went back out into the field as an officer.

“Even though he went back to patrol, I wouldn’t call him ‘easing out.’ Pat was a mentor to the young officers. He’s been more than a mentor many times in the last couple of years — we could always count on him to be a supervisor on night shift for us when we were short-handed.”

Gray said he describes McQueen as a “morally-centered officer who always had officers’ safety at top priority, doing things the right way. He’s an exemplary example of what a role model police officer and detective should be.”

Gray told McQueen that the city “can never repay you for your selfless acts of service, professionalism — but most of all, your friendship.” McQueen moved to investigations shortly after Gray did.

“We walked and countered and talked and discussed cases for 16 years,” Gray said, turning to look at McQueen. “Been a heck of a ride. There’s been ups and downs. And I’m sorry we stepped on you.”