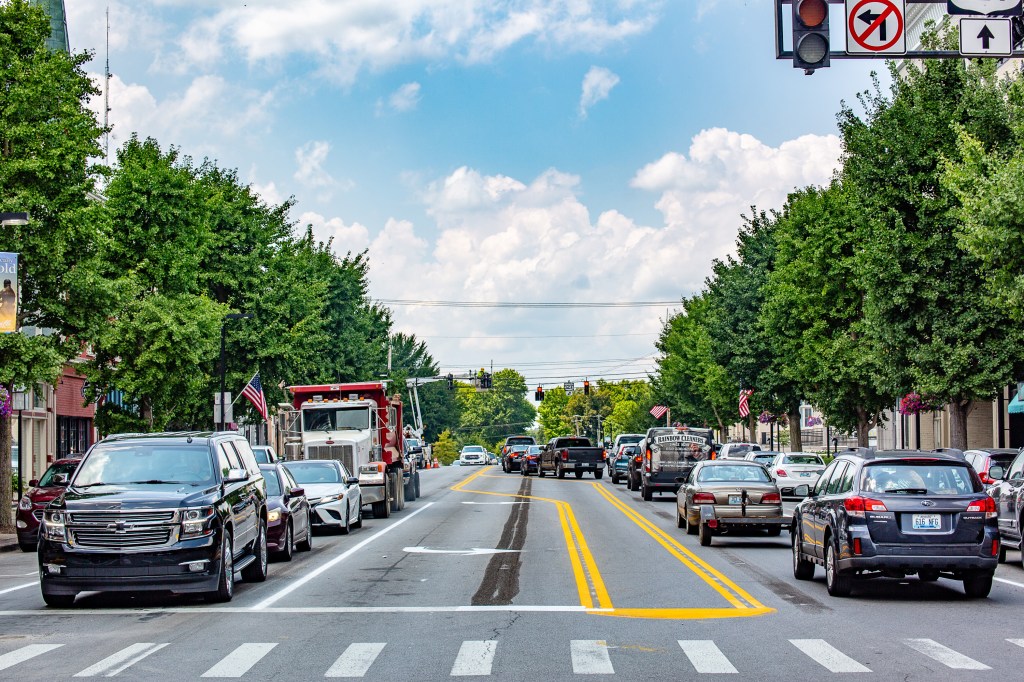 Traffic waits at both ends of the Main Street block between Third and Fourth streets when Danville’s Main Street was re-striped over two weeks ago. Now that the trial lane reduction has been in place, The Kentucky Transportation Cabinet is asking the public for feedback. (Photo by Ben Kleppinger)

Several elected officials questioned why it is necessary for the Kentucky Transportation Cabinet to have a public meeting for the general public to voice opinions about the Main Street lane reduction trial. They made their opinions known this week during a meeting of public officials and first responders with engineers from District 7 at city hall.

The public input forum, which has always been planned by the Cabinet, was brought up during discussions about bike lanes. Even though the state didn’t stripe the lanes on for the trial period of the lane reduction, there is still a possibility they will be added for the final resurfacing project.

And that does not sit well with some officials.

‘It’s not about bike lanes’ 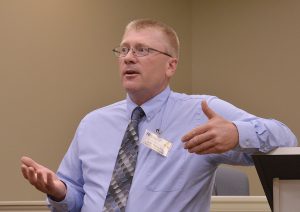 Chief District Engineer Kelly Baker said the way things have been done in the past “ … was a call to the county judge and a call to the mayor, basically saying the Cabinet was going to come and do this.”

Baker said he doesn’t like doing things that way, and wants local support.

“I want to get your input so we can understand as a group what we want to do,” he said.  “The way I look at it is we’re all part of making our routes safer. We’re all in this together.”

He added, “If it’s locally supported, we’ll make the decision and we’ll implement it. If it’s not supported locally, I’ll take that back to our leadership and say here’s what we were trying to accomplish … and ask for their advice on decisions.”

Baker said the Transportation Cabinet is obligated to make state roads safer and “make improvements whenever we have a project coming. That’s the sole reason that we are here and that we have been so supportive of this project.”

The lane reconfiguration “is not about bike lanes,” Baker said. “It’s not about parking. … What this is is a resurfacing project where we are reallocating lane assignments so we can make it safer.”

“I work closely with elected officials, county judges and mayors — that’s a lot of consideration. We want to go beyond that, working forward here. While the business owners is a big part of that, the public — the actual users, the traveling public — that’s the input we also want to get in that public meeting,” Baker said. District 7 is also taking into consideration the comments that are posted on its KYTC – District 7 Facebook page.

‘An error in judgement’

Caywood said, “We’re in the trenches where we talk to people. You all are in Frankfort.” He said when someone asks him if there are going to be bike lanes on Main Street, “I can’t answer. I want to give them an honest answer.”

Danville Mayor Mike Perros said he was concerned about involving the public.

“… I appreciate getting all these people together in this room. We’re either elected officials or we’re professional staff. Now you’re going to have a public meeting Sept. 5. So, what happens if you’ve got 30 people show up and say, ‘We want it some other way.’ Who are you going to listen to? If we’ve got 12, 15 of us in this room, and 30 people say ‘We want it differently,’ who are you going to listen to?”

“Are you saying we shouldn’t have a public meeting?” Baker asked. 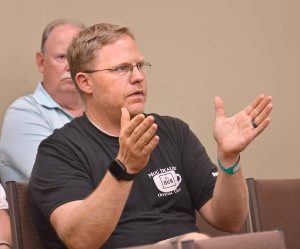 Boyle County Magistrate Jason Cullen talks about the width of the lane reduction configuration of Main Street at the meeting of elected officials and Transportation Cabinet engineers on Thursday. (Photo by Robin Hart)

Magistrate Jason Cullen said, “I think public comment’s great. But you might be putting too much weight …” on the handful of people who may show up for the public meeting.

“Don’t you think a lot of times the more meetings you have the more confusion you get?” asked Sammons.

Sammons insisted there is no use for the public forum, because his constituents “depend” only on him for their information. He is District 3 magistrate, which includes most of the U.S. 127 Bypass area.

“People that’s got questions and problems in my district, they’re going to come to me! I don’t think they need a forum to come in here. But I bet you I won’t have five of my people, in my district (come to the public meeting) because they depend on me,” Sammons said.

Lacy attempted to explain the need for government transparency to the group of elected officials.

“I understand that. It’s just our way of inviting the public and telling them they can have time and have answers to their questions by qualified engineers. … We give that to the public for every project that we have. We want to be transparent. We don’t want the public to think we’re hiding things from them,” Lacy said.

“And that’s great,” Perros said. “But when you start asking for their input and weigh it into a decision, that’s where I have to say I think that is an error in judgment.”

Caywood told the cabinet representatives, “May I suggest you tell the whole story?” He said to make sure the public knows that if they want to include bike lanes on Main Street, “make sure they realize, please realize, we’re going to have to close and narrow some other lanes. That’s part of the decision making process to me.”

After listening to the meeting via phone conference, Rep. Daniel Elliott told the group, “I think we should try to continue to keep an open mind.” He added that public input was “very important.”

He said, “If the decision is made to keep this in place (the current lane configuration without bike lanes), altering what was present during the test period really renders the test period completely useless.”

Elliott encouraged all of the officials in the room to talk to as many people as possible to find out how they feel about the reconfiguration. “It’s important to be a local decision.”

After more discussion about features the elected officials would like to see added to the project, Candice Wallace, a University of Kentucky meeting facilitator, asked the group of men, “Although there has been definitely some concerns and some very important ones, is this something that you can support moving forward when it comes to the decision, when it comes to the public meeting — as it is right now, without bike lanes?”

With a show of hands, everyone agreed to support the lane configuration.