Connecticut based graffiti artist ARCY returned to Danville this week for another portrait of another Danville sports icon, although this time the scale was a little larger.

Last year, he painted an 8-by-12 foot portrait of William E. “Bunny” Davis at the Spirit of 2nd Street festival. This week, he recreated the likeness of former Boyle County standout, Kentucky Wildcat, and NFL tight end Jacob Tamme on along with other sports legends on a wall inside the Bluegrass Sports Center on Ben Ali Drive. 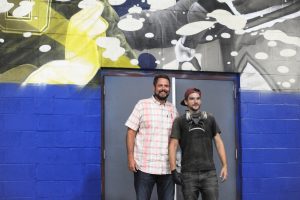 Jacob Tamme was overwhelmed by ARCY’s portrait of him. (Photo Derek Brightwell)

The owners of the facility, Joe and Ashley Wesley, have become friends with Tamme as he’s coached their children in youth sports. They wanted to honor their friend, and a local sports hero, with their facility.

The couple did not tell Tamme that he would be on the wall until the mural was close to completion so that when he came to see it Wednesday afternoon, he was surprised and overwhelmed. 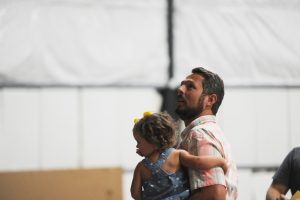 Jacob Tamme looks up in awe the first time he sees his portrait on the wall. (Photo Derek Brightwell)

“I’m not sure I deserve a place on the wall,” he said. “I didn’t expect it when I came here today. Ashley and Joe have become really good friends of ours… That’s what makes it really special. I’m still just taking it all in. I didn’t know this was happening. I didn’t know we were coming here to see this.”

ARCY said that he was a little nervous when Tamme came through the doors. He said he had never done a portrait of a famous person whom he met while they first saw his work. He’s his own toughest critic and is worried that the subject might find fault with his work. Tamme, however, was blown away by the piece.

Tamme feels very out of place on the wall, and even made a joke with his former teammate Manning about it when he was sent a picture of Peyton on the wall.

“I made a joke out of it when they sent me the picture of him. I thought it was me in a Broncos uniform and then obviously it’s Peyton. Who wouldn’t put Peyton on the wall? (I) sent him a picture of him on the wall and then now today I realize I am on the wall,” he said. “It’s all fun. It’s a neat thing and certainly an honor to have even made the wall here. I told Peyton ‘I don’t know why I thought it would’ve been me on the wall, of course it’s you. You’re on every wall in America.’

“I guess being from here earned me a space alongside a lot of people way more famous and more important than me.” 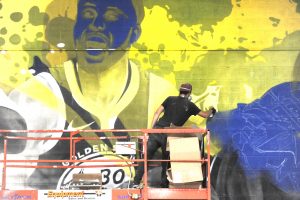 ARCY puts the finishing touches on his portrait of Steph Curry and begins working on Derek Jeter. (Photo Derek Brightwell)

ARCY said that the opportunity to do a large scale painting — which he prefers — in a public space was what drew him back to Danville.

“Being able to do something this — such a large scale — and people being able to see it when they come to the Sports Center here,” he said. “Be able to take it all in. Any opportunity like this to be able to get art done — public art — on a large scale, it really connects with a lot of people. So it’s really cool to have that wow factor.”

Like with his portrait of Bunny Davis, ARCY was not aware of Jacob Tamme before being commissioned to do the piece. He’s excited to be able to create something that will “hit home with the community”, and featured Tamme prominently in the foreground of the picture.

ARCY is based out of Connecticut, but his work keeps him on the road a lot. He completed the mural inside of the Bluegrass Sports Center in four days, working long days that would spill into early mornings. He said that when he begins a piece, especially a large scale one like this, he doesn’t like to spend too much time away from the wall.

He began to incorporate a hidden Mickey Mouse head into all of his pieces for his two children. He still hides one in all of his works, although now he works with the Disney corporation both by doing pieces that they sell at their various parks and occasionally doing live art events for them.

The Bluegrass Sports Center is anticipating an open in the fall. They have already begun laying down one of the basketball courts and are hoping to be finished with the set-up in September. Tamme is excited about what the facility will mean for the community and not just in terms of athletics.

“I hope, as a community, we’re in the place to help kids do all they can do athletically but also remember that there are things in life that are just as important as sports,” he said. “I think this facility will be a great thing for our community athletically for kids but also fellowship and those sorts of things. I think we’ve been overdue for something like this.” 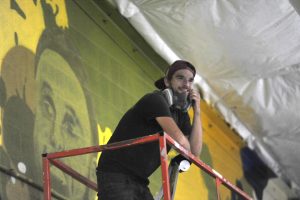 ARCY takes a break to watch Jacob Tamme react to his work from his lift. (Photo Derek Brightwell)

Tamme and his wife, Allison, live in Danville and are happy for the opportunities that gives them to give back to the community.

“We love it. Obviously our son is getting to where he’s more and more involved now. I coach a little baseball team and I’ve coached flag football and basketball,” he said. “We’ve been involved with the rec league and travel baseball and been involved with Boyle Youth Football, too. I think we’ve got a lot of good things going for our youth.

“I think one of the main things is that it can quickly become crazy these days if we’re not careful as parents and coaches,” he added. “You know, to keep athletics in their right, proper place which is to help strengthen and compliment a kid’s childhood. I was really fortunate to be able to have the type of career I had and that doesn’t happen all the time.”

Currently, the Bluegrass Sports Center is anticipating opening its doors in October. Once open, you will be able to see the Tamme and the other legends on the wall while playing basketball on one of its two courts, or while taking batting practice in its batting cage.