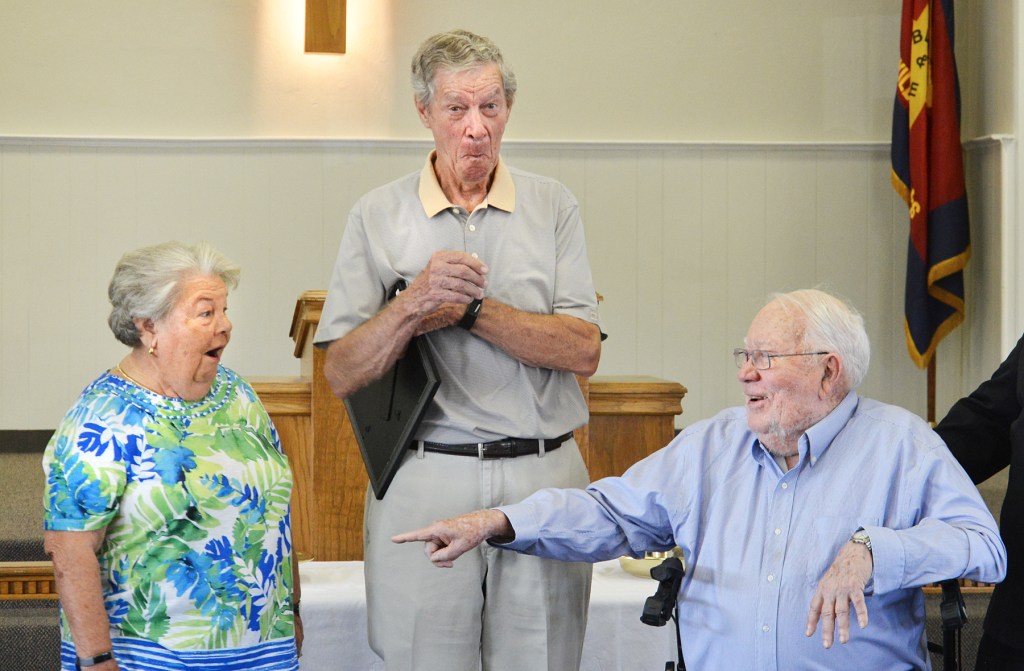 Betty and Ted Baker react to an amusing story that their friend George Cunningham told to the Salvation Army Advisory Board, after Cunningham gave a $10,000 donation in honor of Ted Baker. (Photo by Robin Hart)

The Salvation Army Danville Corps has received a generous financial “shot in the arm” from a local businessman in honor of his close friend. 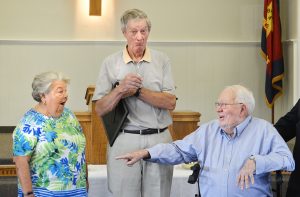 Betty and Ted Baker react to an amusing story that their friend George Cunningham told to the Salvation Army Advisory Board, after Cunningham gave a $10,000 donation in honor of Ted Baker. (Photo by Robin Hart)

George Cunningham, who will have his 92nd birthday next week and who operated Ace Hardware for 63 years, made a $10,000 gift to Danville’s Salvation Army in honor of fellow businessman and friend, Ted Baker, on Monday during the SA’s regular advisory board meeting.

“I thought a long time ago, what could I give Ted in my will or something, to express to him how much he meant to me,” Cunningham told the board. And since Baker and Cunningham have been strong supporters of the Salvation Army for many years, Cunningham decided that making a donation in honor of Baker would be the most appropriate way to show his admiration for his friend.

Cunningham shared several amusing stories about things the men had done over the years, making many in the audience laugh, as Baker’s wife Betty dabbed tears from her eyes.

Cunningham said he wasn’t able to tell the board, “How much love, honor and respect I have for Ted Baker, and little Baker too,” referencing the difference in the couple’s heights.

Following the announcement, Ted Baker said, “I figured he was going to give some money to the Salvation Army, but I didn’t know it had anything to do with me!”

Lt. Lindsey Galabeas said, “We are very grateful to George Cunningham. And we’re grateful to benefit from his friendship with Ted and Betty Baker.” 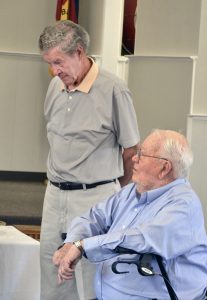 George Cunningham, right, announces that he has given a donation to the Salvation Army in honor of his long time friend, Ted Baker. (Photo by Robin Hart)

Lt. Galabeas and her husband, Lt. Roger Galabeas said they don’t have specific plans for the money yet. But, “it will be used for our greatest needs here in Danville,” Lt. Lindsey Galabeas said.

“We really are going to think through how to use this very generous gift in a way that will be meaningful and long lasting to the community.”

“Getting unexpected things like this at any time is great, but especially during the summer…this gift comes at a wonderful time,” she said.

When making his donation, Cunningham said, “They (Ted and Betty) are two of the finest people. And sometimes when I pray I say ‘Lord, thank you for bringing Ted and Betty Baker to me as friends.“