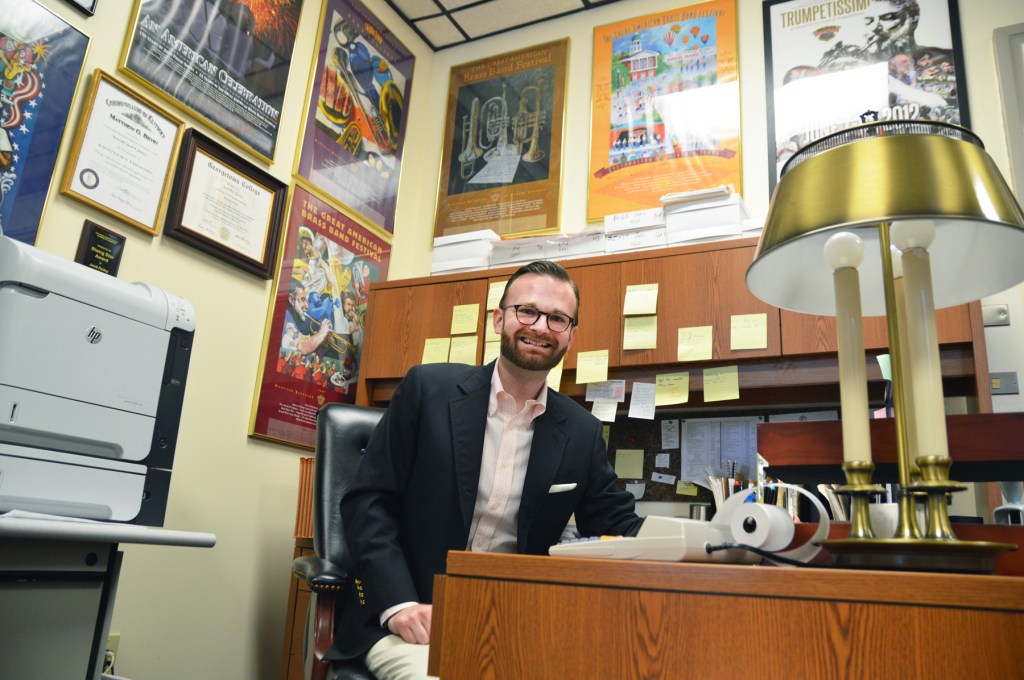 Jacob Pankey has been the finance officer for Boyle County for the past six years. Next week, he begins a new job at Chase Bank. (Photo by Bobbie Curd)

Jacob Pankey says as strange as it sounds, his love for the Boyle County Courthouse is one of the reasons he’s worked there for the last six years.

“I mean, think about it,” he says, pausing on the courthouse lawn while looking off to the clock steeple on a sunny day. “The courthouse is the focal point of downtown; it’s an icon, it’s our image …” But, he says, the work done inside covers much more range “than just this one building that we serve.”

To top 2019’s milestones — he also turned 30 this year — Pankey recently told the fiscal court he will be leaving the county government to work as a private client banker. 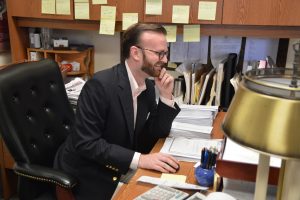 He came in as financial officer under the former Gail Bowling, who retired. He never studied finance; Pankey was an English literature graduate from Georgetown College. After an internship with former Garrard County Attorney Jeff Moss in Lancaster, he knew he wanted to be in local government.

“People say, ‘Oh, you work for the government — federal or state?’ And I tell them local, they pause and say, ‘Ohhhh.’ I tell them it’s not bad! It’s actually better, in my opinion.”

Pankey says local government is more practical, more transparent. And working in the public sector is something he would encourage anyone to do.

“It’s admirable. It’s something more people should consider investing themselves in, if it’s their interest.” He says the higher levels of government often get “glazed over with numbers and the philosophical differences versus the practical challenges that face us day-to-day.”

As finance officer, his primary duty is to ensure the expenses of the county are presented clearly to the fiscal court and that bills are paid on time. He works with Treasurer Mary Conley on a daily basis, as well as Judge-Executive Howard Hunt.

He sometimes goes back to his alma mater to speak about being the enigma that is an English lit major working in finance. “The English department chair says I’m the outlier of the English world — English majors and math majors are on the opposite sides of the world.” But, he feels it all ties in together.

“I have to work with so many types of people. The jailer, knowing his jargon and understanding what he needs; the road department and the county engineer, when he talks about tonnage of salt …” He had to be able to understand where everyone was coming from, and that included picking up terminology he’d never used.

“And I want the general community to be able to understand it. I don’t like it when I try to ask a question and it’s overly elaborated when it can be a simple, common explanation.” He says the term “financial interpreter” fits nicely with what he does.

He performs utility audits, preps for the treasurer’s audit, does inventory management for fixed assets …

Sure, to some it may sound mundane, but to Pankey, it’s all about the people. “A lot of these bills that come before county government can be related to the people in the community.”

He reviews all of the expenses, then discusses them with Hunt, bringing up any concerns. “We go over everything — why is our electric bill or water bill this expensive; I want to get to the bottom of it. I never want to feel like the court was not aware of what they’re paying for.”

Pankey says it can be stressful. “When you have a $30 million budget, and those expenses come through, every single one is reviewed by multiple sets of eyes. It’s been exciting … When you’re dealing with your money, my money — it’s everyone’s money that’s going into this — it’s important I look at them, but also people who are purchasing, like department heads, they’re very diligent as well. We’re all making sure we’re using tax dollars the best we can.”

Pankey says, “As Judge Hunt always says, I’m ‘meticulous with detail.’ I always joke that that’s a nice way of saying I’ll run it into the ground …”

The only thing he really won’t miss doing is “probably reviewing fuel tickets. We’re always on the move, with road crews out, we’ve got the jail out and about, the sheriff’s deputies out. I won’t miss that, but there’s a lot more I will miss …” 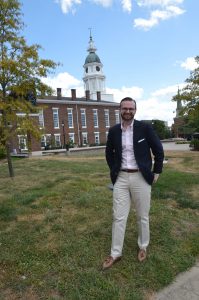 Jacob Pankey stands on the lawn of the Boyle County Courthouse. Pankey will be leaving this week after six years as Boyle County’s finance officer. (Photo by Bobbie Curd)

Pankey is particularly proud of the work he did for the county when he was able to combine his passion for historic preservation with his county job. Last year, he spoke to the treasurer and former judge-executive about historic tax credits the county could apply for. The former court had spent quite a bit of money, Pankey says, on revamping the courthouse to be energy efficient.

“The court gave me permission to apply for these tax credits, and then as a nonprofit or governmental entity, you can sell those tax credits and recoup money.” Pankey helped to recover money that was partially used for the Constitution Square Park endowment fund, as well as paid for a portion of painting the courthouse’s exterior.

“I was very proud of that.”

And although he partly grew up in Danville, he thanks the fiscal court for helping him grow his knowledge of the community. He says because they allowed him to take part in the local leadership program, organized by the Chamber of Commerce, “it let me see all the aspects of this community. There are so many other communities, 10-15 minutes away to us, like Forkland — I call it an oasis that’s just hiding out there we have. Those smaller communities make us so much more dynamic and diverse. Thanks to the county, I was able to learn more about us.”

Pankey says in addition to local government work being different from the state and federal levels, the local government environment is different, too. “Yes, we’re a team — but we’re more of a family. I will really miss that.”

The next person who comes into his soon-to-be former role with the county should be persistent, he says, and consistent. “Someone who is passionate about county government and understands that while you do work for the county judge-exec and the treasurer, you also work for the citizens.”

Pankey let his term expire as chair of Boyle Landmark Trust, the local preservation society, this year and will be stepping away from nonprofit and volunteer work — but just until he’s settled in at JP Morgan Chase.

“But getting involved with the community is important — it’s good for us. Otherwise, all we do is get caught up and work. Serving our community is near and dear to me. More people should consider it.”

Pankey says that even in a smaller community, there “should be a wide variety of ideas out there. I’m about inclusive versus excluded. Too many times, we can work together to make something great, versus working alone to make it good.”