Chandler briefs Rotary about Foundation for a Healthy Kentucky

The U.S. spends twice as much per capita on health care as any other nation, and our health outcomes ranks in the mid-30s of nations. As Kentucky attorney general, Ben Chandler won a $45 million settlement from one of Kentucky’s largest insurance companies; that funding was used to create a Healthcare Foundation in 2001. 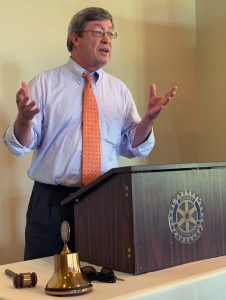 The Foundation is a nonprofit, nonpartisan organization funded by an endowment that works to make the 4.5 million Kentuckians healthier. After the $45 million dollars endowment, a foundation was created with an advisory council to administer the resource. That organization has grown to a 15 member board across the state with a 50-member advisory council.

In 2016, Chandler was named president and CEO of the Foundation for a Healthy Kentucky, the organization Chandler’s legal settlement created. The foundation’s statewide mission is to try to improve the health of all of Kentucky’s citizens. After the early forays into grants, the organization has evolved into an advocacy mission to impact healthcare policy. The focus is on health indicators like life expectancy, the incidence of heart disease, diabetes, and the causes of cancer.

The foundation’s first foray into policy advocacy was to advocate for raising the price of cigarettes in Kentucky. Kentucky’s history with tobacco is deep, with 119 out of the 120 state counties having grown tobacco at some time. At its peak, the number of tobacco farmers was over 60,000; today, it is less than 4,000. Today, the annual economic impact is between $350 million and $400 million. By comparison, the health care cost of treating former tobacco users is almost $2 billion annually. Kentucky taxpayers spend $600 million annually for Medicaid alone.

Kentucky leads the nation in both the incidence of and morbidity rate resulting from cancer. More than one third of all cancers are attributable directly or indirectly to tobacco use. That means a lot of cancers could be prevented if tobacco use is reduced. So, Chandler’s foundation went into the General Assembly two years ago with a campaign to raise the price of cigarettes by adding a $1 tax to cigarettes.

It was a very difficult task to undertake (A lot of the politicians represent smokers and nobody wants to have taxes raised). The foundation campaign emphasized that people don’t pay the tax unless they use tobacco. In the end, they didn’t get a $1, but they did get 50 cents, which represented the single largest cigarette tax increase in the history of the commonwealth. Now, with over a year’s worth of data since the tax went into effect, Kentuckians have bought 35 million fewer packs of cigarettes.

Chandler has had some success advocating for smoke-free environments throughout the state. In the last legislative session, the foundation began a campaign for a tobacco-free schools bill. On the very last day of the session, the Senate passed the bill and it became law. There was an option to opt out incorporated in the final passage, but in the month and a half that law has been in effect, Kentucky has shot from 42 percent of school districts covered to about 75 percent.

Now, the foundation is looking at putting a lid on the growing problem of vaping. In high schools, the use of vaping products has increased by 78 percent in the last year alone, and in middle schools it has increased by 48 percent. Vaping is really an aerosol with heavy metals and other chemicals that cause something called popcorn lung. Vapors are full of nicotine, which the medical professionals say retards brain development. It changes the pathways in our brain physically, and we become more susceptible to other addictions throughout adult life.

Other areas of the foundation’s focus include obesity and early childhood learning. When kids are exposed to several traumatic events in their childhood, they’re almost certain to live an unhealthy life and unproductive life. Increasing health care insurance coverage is a continuing area of advocacy. Gov. Steve Beshear expanded Medicaid coverage to almost half a million more people here in Kentucky. If people are covered by health insurance, they are more likely to get preventive care. Given adequate preventive care, future health care costs will be a whole lot less.