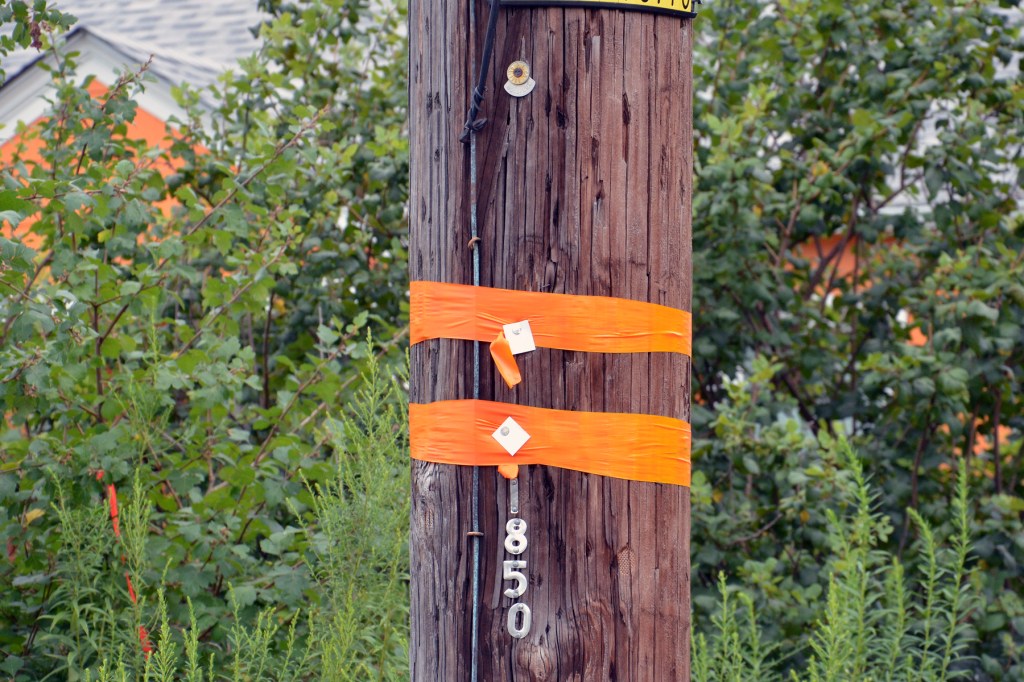 Two plastic orange bands signify a utility pole is scheduled to be replaced, like this one on East Walnut Street, near Jennie Rogers Elementary School. (Photo by Robin Hart)

Power was cut off unexpectedly for a short time at about 531 locations in the eastern part of Danville Thursday morning, including at Danville High School and a Kentucky Utilities office building. 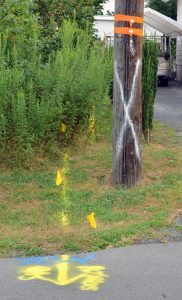 Utility pole workers place small yellow or blue flags along with yellow or orange paint around the base of poles that will be replaced. (Photos by Robin Hart)

A utility pole was being replaced by 5 Star Electric contractors on Broadway, near the Kentucky Career Center building, but workers on the site said their work had nothing to do with the large outage, which was reported at 10:59 a.m.

As of Thursday afternoon, no one from KU could be reached to find out the cause of the short outage.

Power was soon restored for the KU customers in the area and was only off a bit longer for the residents on Broadway, between Wilderness Road and the alley next to the career center building, while the pole was being replaced.

Ron Parson, an inspector for the subcontractors at the site, said several other wooden utility poles around Danville have been marked to also be replaced.

If a pole has two plastic orange bands on it, it is scheduled to be replaced soon, Parson said. A pole with a single red band isn’t a priority pole, but will be replaced within a couple of months, he said.

Right before replacing a utility pole, workers try to knock on doors to notify residents when the power will be off, Parson said.

Little blue and yellow flags and yellow and orange paint appearing on the ground around a pole indicates other utilities have been by and marked where the underground lines are, he said. “When you start seeing a bunch of those, we’re going to be there soon.”