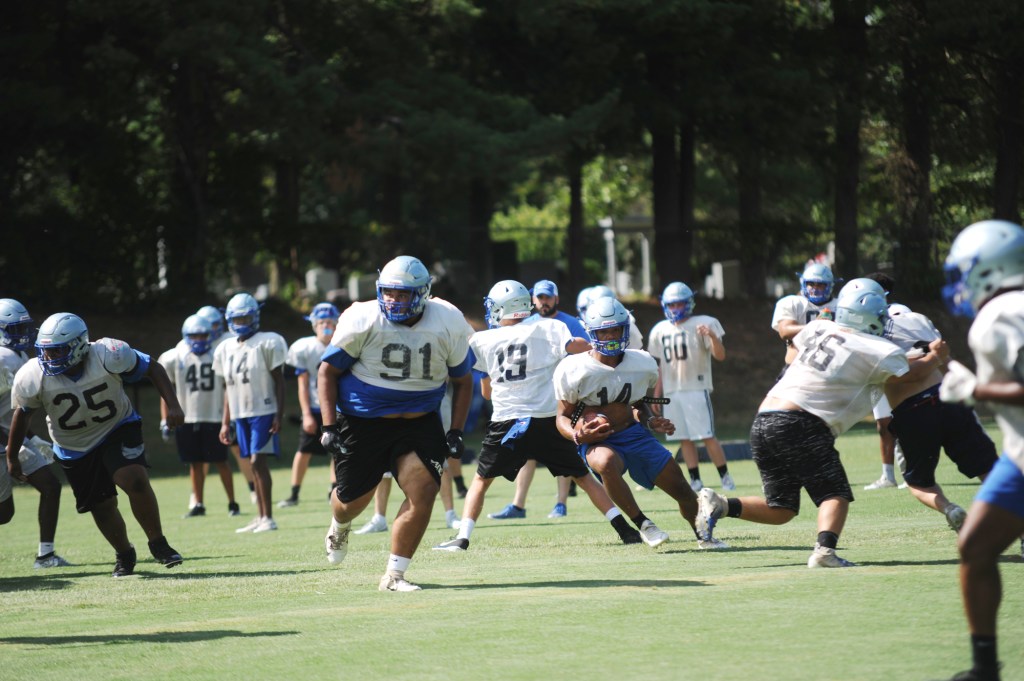 Despite losing 19 seniors from last year's team, Danville enters the year No. 4 in kentucky.com's preseason 2A poll. (Photo Derek Brightwell)

In the two years since Danville was crowned state champions in 2017, the Ads have lost double digit seniors to graduation each year. This year’s team features six seniors and a bevy of young talent. It’s still a team that ranked fourth in the preseason 2A rankings by kentucky.com going into the year.

“Those things (preseason polls), we don’t ever talk about them,” Danville coach Clay Clevenger said. “I don’t even know if the kids look at them. I saw that and just laughed.”

Still, heading into its first game against John Hardin in the Bob Allen Pigskin Classic, the Admirals feel confident in the team taking the field.

“I think we’re going to accomplish great things. We have a lot of potential. We’ve had a lot of people step up, some young ones, some freshmen,” senior linebacker and tight end Darrian Bell said. “I think if we push ourselves to the limit and play as hard as we can, we can do a lot more than most people think.”

Senior defensive end Nicholas Price-Hancock spent the summer in basic training for the Army and said that when he returned, he could see a tangible difference.

“As soon as I got back and was on the sideline during that scrimmage against Southwestern, I was able to see that huge difference from before I left to when I came back,” he said. “I was able to see that I wasn’t the only one that went through a change. I think the coaches did a really good job of making the younger guys understand that they need to step up this year because that’s definitely going to be a big thing this year when we have only six seniors and we lost 19 last year.”

The first opponent on the year is a relative unknown to the Admirals. A little bit of film from early scrimmages has given Clevenger an idea of what to expect against the Bulldogs, but he knows you can’t rely on that alone.

“But you never know after that first scrimmage and coming back with weeks of practice, teams are going to get better and look a lot different.”

What he does know is that they throw the ball around a lot on offense and employ a spread system.

“They’ve got good athletes around,” Clevenger said. “There’s a couple of kids we’ve seen go and make some plays and do some things.”

“They’ve got an active quarterback. Their skill (positions) seem really athletic, everybody is really athletic,” Bell added. “They’re a passing team and we’ll have to see what we do there.”

“I know their quarterback is pretty good. That’ll be one thing, especially for me on the defensive end. I’ve got to know what I’ve got to do and know my calls,” Price-Hancock said. “I need to stay disciplined. As long as we do our job and know what we’ve got to do, we’ll be fine.”

The biggest problem for the Admirals, according to Clevengr, is the inexperience. Losing 19 seniors is never easy, and the guys who will be filling in those roles lack the game experience that he’d like to see.

Sophomore Brady Morse and freshman Sage Dawson have been taking the bulk of the reps at quarterback, and while Clevenger likes what he sees from them both, he admits that it’s difficult to judge without seeing how they respond in game situations. 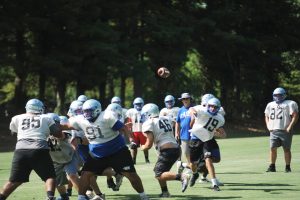 Sophomore Brady Morse and freshman Sage Dawson have been competing for the starting QB job this offseason. (Photo Derek Brightwell)

“They both bring different strengths to the table,” Clevenger said. “The major thing, though, is inexperience. That’s tough, especially at that position.”

At running back, sophomore Caleb Burns will be getting the bulk of the carries.

“He’s probably 180 pounds, and got tree trunks for legs. He’s got good speed — he’s got a lot of the good things that you want out of a running back,” Clevenger said of his sophomore back. “It’s just about getting him the experience and a good feel for the game and our offensive line being able to sustain blocks and give him the space to work.”

Inexperience was the theme throughout as Clevenger talked about going into the first game. He said that the thing he’s most looking for is how his team manages their emotions as the season starts.

“With all the inexperience, and first game and all that — I think a lot of it is overcoming your emotions early in the game. You don’t want to come out and fall flat on your face because you’re so ramped up and worked up,” he said. “Come out and get in the flow of the game and play football. We talk a lot about playing with a little kid’s heart. Some of these guys have been playing since they were in second or third grade. Just go out and play like those guys do because they don’t have a lot of fear and they just go out and have fun.

“If we do that, then obviously the things you have to do to win are take care of the football, block and tackle well and that sort of thing.”

The Bob Allen Pigskin Classic match-up between the Admirals and Bulldogs will begin at 8:00 p.m. Saturday, Aug. 24. It will be the only Saturday game the Admirals will play all year. As for what coach wants to see from his team in Saturday night’s showdown?