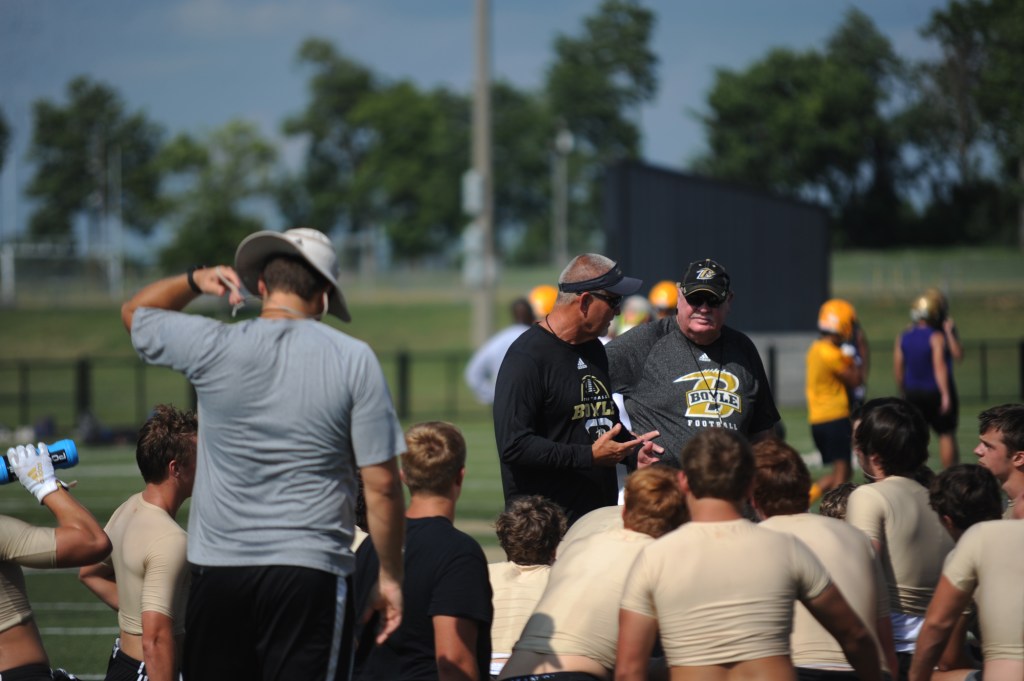 The 2019 football season is soon upon us, and perhaps no team is as eager for kickoff as the Boyle County Rebels.

Last season ended in the state semifinals against Corbin. This season, the mantra for the Rebels is “Finish the Mission.”

“That’s the players’ goal. My goal isn’t to win a state championship this year, that’s not my number one goal at all,” Boyle coach Chuck Smith said. “My goal is for us to be a team and a family. For us to be accountable to each other, to earn each other’s trust. If we can get the team to do that, then I’ll be happy and everything else will take care of itself.

“We obviously did not do that last year. That’s the real reason that I want to make sure that’s my number one goal. We’ve gotten off to a good start in that. I think it’s went pretty smooth so far. The kids are working hard and want to be accountable to each other. They’re wanting to earn each other’s trust and dependability and hopefully we’ll continue to do that.”

Boyle enters the season as the preseason favorite to win the 4A state title, despite being a 3A school last year. They join a loaded division that features two state champions from last season.

The Rebels opponent for the season opener in Mercer County’s Little Caesars Ft. Harrod Bowl is the Iroquois Raiders from Louisville. The Raiders will have a new coach on the sidelines after finishing 2-8 last year. Coach Donte Ellison knows the reputation that coach Smith’s team carries with them.

He added that his team, while not as deep as a Boyle County, is not afraid of the challenge and likes what he’s seeing from his guys in the preseason.

“I like their hunger. They want to be good. They’re not accepting being mediocre. The guys that we put out there are going to be hard nosed,” he said. “We’re going to hit. That’s one thing that we do. We lay the wood, we laid the lumber in our first two scrimmages. They go all out.”

For both coaches, the challenge is applying what they’ve been teaching in practice to the field.

“We need to get the year started off on the right foot, the right note, the right enthusiasm. We just need to get after it and get with it,” Smith said. “We’ve been practicing hard all summer long now. It’s time to put it all together now in a test and that test will be the game. I’m kind of anxious and curious about how we approach this game, how we execute in the game.

“I know the guys are ready to play a game. They’re ready to test what we’ve been practicing. I know they’re pretty excited about that and looking forward to the game.”

Smith also acknowledged that, while everything has gone smoothly in the offseason, he won’t really know what his team is made of until they face some trouble.

“We haven’t had any adversity yet, either. Usually that’s all tested when you have adversity. That’s what happened to us last year,” he said. “We had a little adversity going into that last week with injury and sickness and everything else. We didn’t step up and do as we thought we really would.”

At Iroquois, coach Ellison is trying to change the perception of his program and build them up to reach the level of a Boyle County. It’s something he has experience with.

In college, he attended Western Kentucky University and watched firsthand as the program transitioned from an 0-12 season to winning a bowl game. He performed a similar turnaround last year as the girl’s basketball coach at Iroquois.

“Before I took over, they had only won 13 games in eight years. We were able to be 18-13,” he said. “I want to change the perception, not just of the football team, but Iroquois in general… I want them, whenever they see an Iroquois football team to see a disciplined football team whether we have 50 kids or 15 kids. One sound, one man is what we always say.

“It all goes back to building the program,” he added. “It’s got to be step by step. For me, it goes back to giving the kids a reason to come here.”

This year marks the fifth in the partnership between Mercer County and Boyle County. The two teams will be in action next week for McDaniel Wealth Management Rebel Bowl at Rebel Stadium. Smith has enjoyed the partnership, and expects Rebel Nation to be out in full force, despite it being a neutral site game.