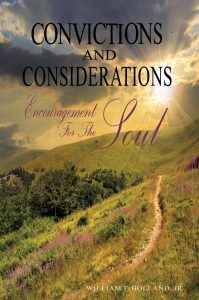 Religion columnist Billy Holland has published a book, “Convictions and Considerations,” which compiles many of the “Living on Purpose” columns he has written since 2016.

The book is offered on Amazon and through all major booksellers. Signed copies can also be obtained directly from Holland by emailing psalmz103@gmail.com. More information about the book is available on Holland’s website, billyhollandministries.com.

“Four years ago, I stepped out in faith and spoke with the editor of our local newspaper about submitting an article. I brought him a couple of examples of my work and was surprised when he asked if I would be interested in writing a weekly column,” Holland said. “This was very encouraging and in January 2016, ‘Living on Purpose’ began. The inspiration for my writing is simply to relay God’s message. As most of you already know, I intentionally avoid arguing about political and social issues, and I have no desire to be dogmatic about trivial religious issues or to appear hyper-spiritual.

“This format has opened doors and I’m grateful for publications around the country who run the column as my readership continues to grow beyond my highest expectations. With all the positive and encouraging letters and emails I receive, I felt the Lord leading me to gather a collection of these stories into a book along with other styles of my work that have never been published before.”

Holland said the goal of his columns and new book is “to be a refreshing voice of peace, faith and hope.”

“My goal is to motivate the reader to ponder about the will of man versus the will of God and to realize that our Christianity is measured according to how serious we are to yielding our life to his Lordship,” he said.

Holland previously published “A Lifestyle of Worship: Living in the Awareness of God’s Presence” in 2015. He has at least 10 more books he has written but has not yet published.