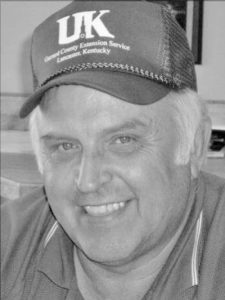 Michael White Carter, 72, of Lancaster, died on Monday, August 19. Mike was born on July 29, 1947, in Danville to the late Elwood and Patricia Carter of Moreland.

He graduated from Hustonville High School and earned his Bachelor of Science degree in agriculture and Master of Science degree in plant breeding and plant genetics from the University of Kentucky. He served as University of Kentucky Extension Agent in Bullitt County for five years and in Garrard County for 31 years. He was the only Extension Agent to win of the R.J. Reynolds Award three times for all his contributions to the tobacco industry. He was a Kentucky Colonel. Others may have been more familiar with Mike in his role as the “Voice of the Golden Lions.” One of the pillars of the community in Garrard County, Mike enjoyed working with others to build the movement that led to the annual county fair, the construction of the current Garrard County Extension Service Building, and many other community events/functions. Mike loved living and working with the people of Garrard County.

Visitation will be held from 5:00 p.m. to 9:00 p.m. Thursday at W.L. Pruitt Funeral Home in Moreland, Kentucky. The funeral will be held on Friday at 1:00 p.m. also at the funeral home by Bro. Bob Rush. Burial will be at Lancaster Cemetery. Guestbook available at www.wlpruitt.com.