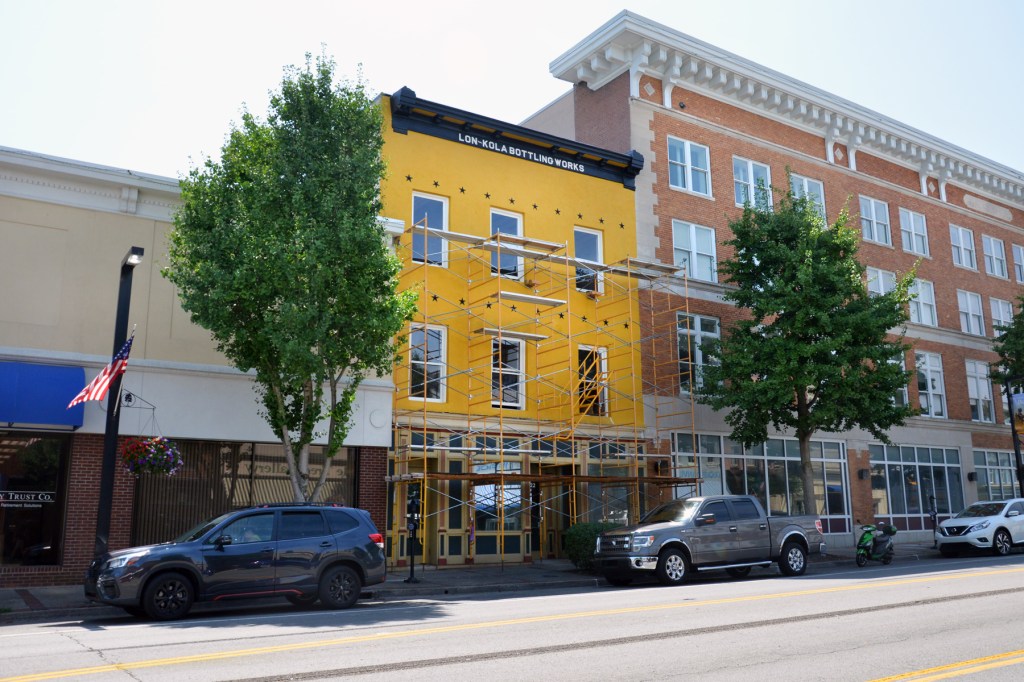 The building located at 222 W. Main St. is being renovated by businessman and downtown property investor, Tim Montgomery. (Photo by Robin Hart)

Another Main Street building is being renovated for upper floor residential use.

Property investor Tim Montgomery is beginning renovations to his building at 222 W. Main St, which has been vacant for many years. It was once known as the Lon-Kola Building and was constructed in about 1911, according to the certificate of approval administrative review written by Danville Historic Preservation Coordinator Joni House. It’s also listed on the National Register of Historic Places in the city’s commercial district.

Scaffolding has been in place on the front facade for several weeks, signaling work is about to begin.

Because the building is located within the city’s historic district, Montgomery had to seek approval from the Danville-Architectural Heritage Board to allow him to make several changes to the upper two floors at the rear of the building.

On Wednesday Montgomery said only the top two floors of the rear wall were visible from the top of the parking garage.”It’s in an advanced stage of deterioration.”

He wants to take down all of the brick so that an engineer can inspect a steel beam. Repairs would be made, possibly replacing the beam, and the wall would be reconstructed with the original brick. Two doors will be added, as well as two wooden decks and vinyl replacement windows.

There was some discussion as to why the AHB should approve the vinyl windows even though they aren’t “compatible” with the original structure.

Montgomery said by installing vinyl windows only in the rear, where they can’t be seen from the street, will help reduce his cost, thereby keeping rent more affordable for good tenants.

In fact, the apartments are already rented and they’re waiting on him to finish the project, he told the board.

Montgomery recently completed renovation to another building at 311 W. Main St. where apartments are on the top floors and a commercial business will soon be renting the street-level space.

“I’m like a kid in a candy store. I truly enjoy this kind of work,” Montgomery said.