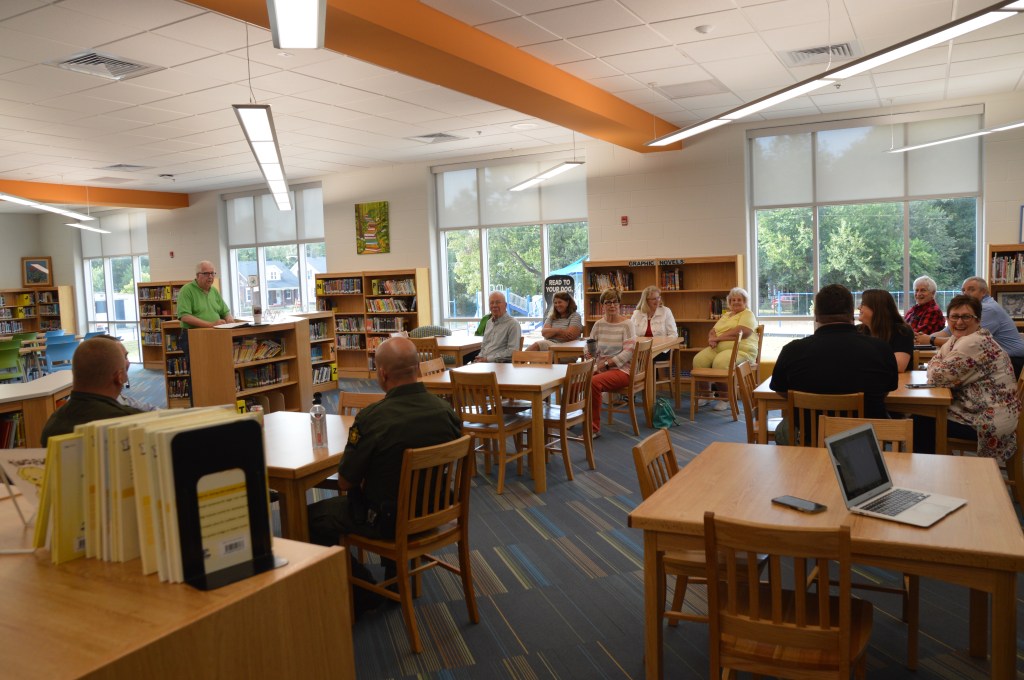 Boyle County Magistrate John Caywood, far left, leads up the latest Pulse of the People, for District 6. There were about 16 in attendance, but only two within Caywood’s district. However, the group learned a lot about what school resource officers do, since local law enforcement was present. (Photo by Bobbie Curd)

Boyle County Magistrate John Caywood offered his District 6 constituents a chance to come out and share their concerns Wednesday evening during the continuance of the Pulse of the People series. Only two out of the roughly 16 citizens present were actually in his district — which includes the areas of Bluegrass Park, Argyll, Maple Avenue, Old Shakertown Road, Streamland, Candlewood and Caldwell Manor.

However, many were able to learn more about what local school resource officers do, since Boyle County sheriff’s deputies were on hand.

Retired Professor Eric Mount, who does live in Caywood’s district and said he has for 20-plus years, opened up the Q&A by asking about upkeep in Millennium and Jackson parks. “I hate to jump on our new Parks & Recreation guy,” Mount said, directing his comments to Danville-Boyle County Parks & Rec Director John Bell, who was present.

Bell said for Jackson Park, the city would need to be notified about any upkeep issues; Parks & Rec does no programming or upkeep inside the neighborhood parks, as of now. But he made notes about Mount’s comments on an issue with a gazebo, and pet waste bag dispensers not being filled at times in Millennium.

“I can only fix them if I know about them; I’m on it,” Bell said, as he was taking notes.

After the group took a tour, led by Danville Schools Superintendent Tammy McDonald, of Edna L. Toliver Intermediate School — where the forum was held — Caywood asked Sheriff Derek Robbins to talk about personal safety and what school resource officers (SRO) are up to.

“It’s gotten to the point to where — they say if you see something, say something. And that’s more important than it’s ever been,” Robbins said, noting how three people have been caught in the nation in the recent past, who could’ve caused a mass casualty incident. But they didn’t, because people reported threats and other information about those individuals.

Robbins told the group that citizens should remain alert at all times about their surroundings. He said as law enforcement, they are trained to do this, but citizens need to practice it as well.

“The mentality needs to change,” he said, but added officers sometimes live “a paranoid lifestyle” because of what they see on a daily basis.

“We probably take it to the extreme,” Robbins said, after mentioning that all of their significant others know when they go to restaurants, they like to sit with their back against the wall. “We size everyone up, see who’s entering …”

He said now that there are concealed carry-holders, it’s even more important. “Not everybody carries weapons, and not everybody wants to carry a weapon and not everybody that carries a weapon is bad. … Just be aware of your surroundings, and have mental plans in place: What would I do if this or that happened. You can’t have a plan for everything, but being situationally aware could buy you some extra time to get your family to safety” in an event.

Robbins explained there are five SROs who cover both districts, which he said “in today’s climate” is very important. “It’s a deterrent,” he said, against people who are out to hurt others, such as in mass shootings, and are looking for “soft targets.”

He introduced Dep. Ricky Sellers, who manages the SROs. He said SROs all communicate with one another well, and make sure they go to different elementary schools in the area “and be present and seen.” Sellers said it’s incredibly important that kids get a positive impression from officers starting at a young age.

“Some have had nothing but negative experiences with law enforcement and see us in a different light” or as intimidating, Sellers said.

Sellers told the gathering that Petey, the K9 he is stationed with at Boyle County High School, has actually turned out to be more of a therapy dog than a drug dog. He said students are known for stopping by his office to give Petey a pet on a daily basis.

“Some kids who may not be as socially outgoing come and pet the dog and it creates a dialogue between us,” he said. Sure — Petey is a good deterrent for drugs, he said, “but he’s turned out to be a better buddy.”

He said when Robbins asked him to take the K9 position as SRO, “I thought I was done” working with a drug dog, “but I wasn’t.” He said at the time, the Boyle County school district was the only one that had a dedicated drug dog in its SRO program, and seven different states have contacted him, wanting to model their programs off of Boyle’s.

“That’s a huge accomplishment, or a way to say ‘good job’ to the community for letting us do what we do,” Sellers said.

He told stories of students, like a young girl who came to pet Petey. Sellers was introducing her to the dog, “but she said she already met him … She had a calculus test .. and was kinda out. She said ‘when I pet Petey, I calm down. She takes her test, and I see her the next day and I asked her, ‘Well, how’d you do?’’ She said, ‘When I calmed down and petted Petey, I scored a 96.’ That’s what that does.”

One student, Sellers said, stopped by who was having a really bad day. He and another SRO could tell she was having a bad day and invited her in.

“She sits down on the floor, and Petey’s like any dog — he knows when (students) need someone.” Sellers said within 15 minutes of being on the floor with the dog, the student began opening up about an abusive relationship she was in. “So, she was unloading her burdens on us. And that’s what Petey does for us, a tremendous tool.”

Caywood said these are the stories people don’t hear and need to. “This is what goes on every day. This is a challenge to us to take on some of the things we need to take on as a society, so we can work on them and improve them …”

Resident Brenda Mitchell asked Sellers, “When you’re in school, do you just periodically go around to where Petey would be able to come into contact with a lot of students, so if there were a drug, he could find it? And are the kids much more aware of what would happen if they had it on them?

“Petey has located some stuff … “ Sellers said. “Let’s face it, kids are creative. They think ahead of us … But Petey always tells on them. I tell them, ‘Petey is a tattle tale.’”

He said he has taken Petey to school assemblies, and used him “to break down barriers” because of the way students react to him. “He’s the superstar, I just hold the leash.”

“So in an assembly, with all those kids in there, can he pretty much find that quickly, or …” Mitchell asked.

Robbins said, “We try to minimize him just sniffing people … Not because we wouldn’t want to find it, but sometimes people are scared of dogs,and you don’t want to force that on them. You kind of get into an area of making someone feel uncomfortable.”

He said he can find drugs like that, absolutely. “But it’s a fine balance between creating a fortress at a school and of creating a comfortable learning environment, where we can protect them. I don’t know if we’ve found that balance yet, but that’s kind of the balance we’re trying to find.” He said obviously, he doesn’t want kids bringing substances into school, but he also doesn’t “want to make a bunch of kids uncomfortable either, that we’re … up to them and saying, ‘Hey, sniff Chad’s belly and see if anything’s in there.’”

Mitchell said, “Maybe you should.”

Caywood said SROs have become a very specialized job, and thanked them for the work they do.