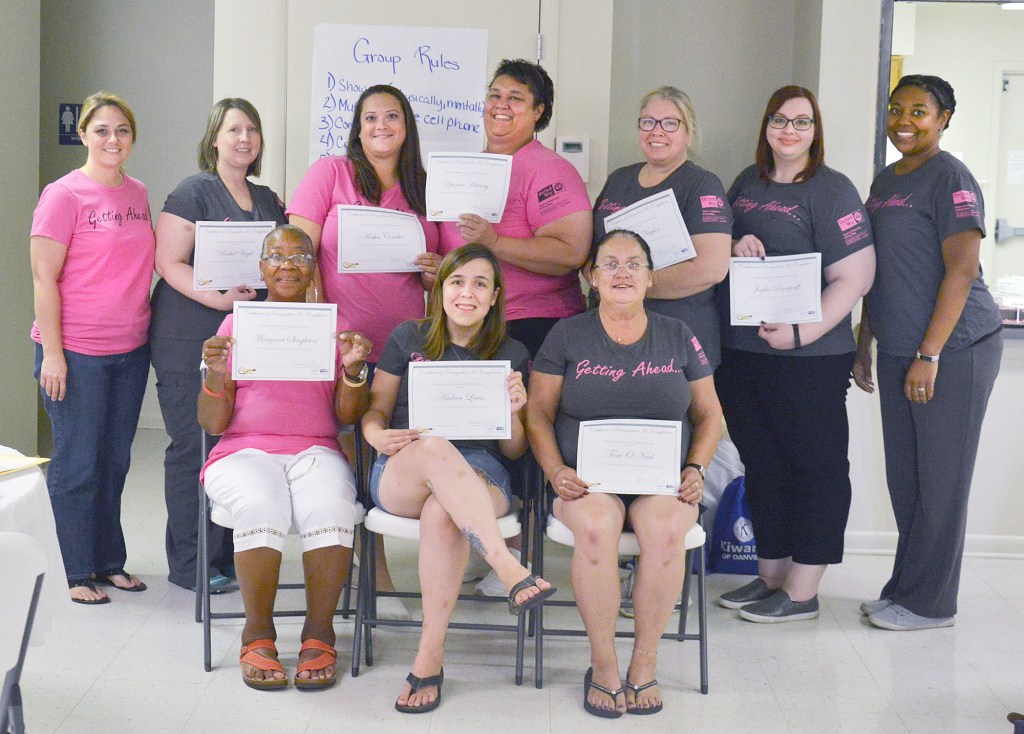 The 2019 graduating class of "Getting Ahead in a Just-Gettin' By World" include, front row, from left, Margaret Singleton, Andrea Lewis and Tina O'Neal. Back row from left is class co-facilitator Gwen Campbell, Rachel Virgil, Kisha Conder, Yvonne Harvey, Jessie Naylor, Jayla Pennycuff, and co-facilitator Crystal McPherson. (Photo by Robin Hart)

A group of women living in Danville’s public housing are now better equipped to help address poverty issues within this community after graduating from the “Getting Ahead in a Just Gettin’ By World” program, sponsored by the Heart of Kentucky United Way. This was the second class to complete the program. 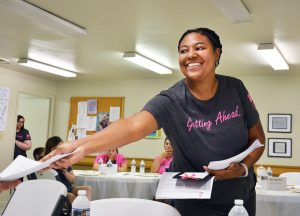 Family Services Association Director Crystal McPherson hands out an overview of what program participants discovered while researching different aspects of Danville and Boyle County and how people living in poverty are affected. (Photo by Robin Hart)

“This is not just a group of people getting together talking about poverty and feeling sorry for themselves and complaining about poverty in the community,” said Resident Services Coordinator for the Housing Authority of Danville Gwen Campbell, who co-facilitated the program with Crystal McPherson, CEO and Director of the Family Services Association of Boyle County and mental health counselor at Centre College. “But they’re actually making concentrated efforts to get out into the community and do some things about it and make some positive changes.”

On Wednesday evening, the eight women who completed the 16-week course gathered at the community center on Toombs Court in Batewood Homes for their graduation program. Wearing pink and gray T-shirts with the words “Getting Ahead” on the front and “Doing something good in the neighborhood” on the back, the ladies laughed and talked with each other before the program began.

“This is a group of poor people living in poverty. They specifically addressed issues of poverty in that community,” Campbell said. The class followed the “Getting Ahead” workbook and began with “self assessments,” in which they “looked at their own life choices to see if there’s anything that they’re doing that’s contributing to poverty,” Campbell said.

“I think that we were all shocked at some of the things that we learned,” Campbell said.

The class will now share their findings with the county’s stakeholders, public officials and program directors, Campbell said.

“It’s an incredible program,” United Way Director Stephanie Blevins said. “It takes people from generational poverty, using them as the experts, to really explore what that next step is and where they want to go. I think it’s just like anybody — you don’t know what you don’t know. Regardless of what socioeconomic class you’re in, there’s always things and resources and places, that had you just known about, could benefit you in life. I think that’s what this program really is.”

Campbell said through online statistical research and interviews with local leaders and officials the group formed a chart of “some of the biggest needs that we thought could be addressed in Boyle County.”

One of the weaknesses the group found was a lack of volunteerism within their own community, Campbell said. “So they wanted to change that and decided that they themselves would become volunteers.” 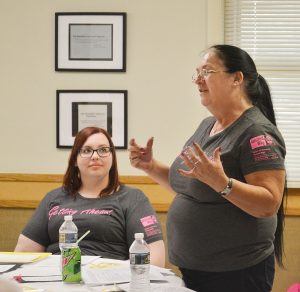 Not only did the course require participants to research the resources in Boyle County, it also required them to develop a community service project, Campbell said.

“The group decided that a project associated with the foster care system was the most direct way to make a meaningful impact on the quality of the lives of their community members by supporting children in crisis,” Campbell said.

The participants (also called investigators) wanted to fill small backpacks with personal hygiene items to give to teenagers when they are quickly removed from their home by social services and taken to foster care. Campbell said there are more resources available to young children than there are for teens.

When members of the Kiwanis Club found out about their project, they donated $100 to the women so they could purchase supplies and complete their project. The club also donated the backpacks, which they filled for four boys and four girls, with only 69 cents left over.

Class participant Kisha Conder shared that she had been a foster child several years ago. When she was removed from her home she left with no personal belongings. It would have meant a lot to her if she had a bag like they had prepared, just to help make her feel a little more secure, she said.

Working with the group also helped get her through an abusive relationship and she learned there were more resources she could rely on, just like she knew she could rely on her new friends and classmates, Conder said with tears in her eyes. Plus, Wednesday was her first day working at a full-time job in several months — the room erupted with applause.

McPherson said some of the women in the group worked full-time, some part-time and some were disabled. “You can work a full-time job and still be poor.”

During the weekly two-hour meetings, they talked a lot about poverty and how being poor was a cycle that was hard to overcome. Poverty is not just about a lack of financial resources, McPherson explained. “It’s also about family and social support.”

If someone can’t pay all of their utility bill and they live in a community “full of poor people” they can’t depend on neighbors to help because they don’t have the money either, McPherson said. “So they depend on the government for help.”

“They deal with those everyday struggles that we do,” like having transportation and affording childcare that they need to have in order to be able to go to work, McPherson said. “They push through all of that and survive.”

Before bestowing the certificates of completion of the program, Campbell said, “This is not a group of ordinary, everyday citizens. They are extraordinary, amazing, powerful, passionate women who are excited to contribute to the community. … Let’s face it, we are the people in this room that are affected by all these things. We are all experts,” in how community policies and programs affect people living in poverty, Campbell said.

McPherson added that during the course, “We talked about how their participation on boards, whether it be as an advisory capacity or board of directors, they can help form some of these policies that are being created. So if anybody has any board members needed, here’s a plethera,” of residents living in poverty who want to help their communities.

Members of the second graduating class of “Getting Ahead in a Just-Gettin’ By World” were:

• According to the Housing Authority of Danville’s website Boyle County’s median income in 2018 was $56,100.

Rachel Virgil describes what she found out while investigating education conditions of Boyle County. (Photo by Robin Hart)

Tina O’Neal reacts with glee after talking to the group about what she learned during the 16-week course, Getting Ahead in a Gettin’ Behind World. (Photo by Robin Hart)