The rise and fall of figurines through the centuries

Question: Hey Jerry, I’ve got loads of figurines that my school kids and family have given me over the years. I’m sure that some are very expensive, as they come with guarantees and paperwork. But I just don’t live that kind of life anymore. I don’t want to clean them or use the space in my assisted living home for the cases. Some I want to keep for sentimental reasons. Are they worth 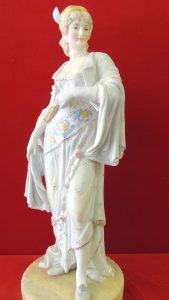 Answer: This is a question that I get asked at least once or twice a week. Figurines… figurines… figurines — they make my head hurt sometimes. I’m working an estate tag sale that, I swear, has at least 1,000. I kid you not. You know what though? They are so beautiful. Each one, even the less expensive ones, are just like little sculptures. All of those details are so special. Shame that the buying public doesn’t think so.

Figurines have been in production for thousands of years. Back in the earliest times they were used to represent gods and goddesses in an effort to promote wealth, health, babies and crops. In fact they were fetishes meant to be prayed to and worshiped.

Move on to the 17th and 18th centuries and figurines became the decorative arts of the wealthy. They depicted court life, kings, popes and simple country life. These were often made by the finest of the finest porcelain manufacturers. These figures can, even in this soft economy, fetch thousands of dollars to the right collecting brackets.

Jump forward a little more to the 1880s — early 1900s. This time period saw new ways of manufacturing these precious items for the growing middle class. And manufacture them they did, by the railroad car, for every overstuffed, collectible-filled Victorian home in American and Europe.

Every conceivable theme, subject, color and size imaginable were churned out en mass. And for a long time, even into the 1970s and early 1990s, you could find large and abundant displays for sale in department, gift and jewelry stores. I can remember them in my own youth.

I’ll just tell you, most figurines — even those Victorian examples — with their gold details, aren’t worth much today. Some from this period can be expensive, to the right collector and in the right condition. But not often.

I’ve seen in the past 10 years, even brands like Cybis, have tumbled in price, value and desirability. Cybis were uber beautiful,  high quality and were touted as being the finest American made figurines made — and it was true! However, collectors have found the figurines that they paid $2,000 for in 1989 are today being offered on eBay for about $300, with many not even selling.

If you love them, then great. But if you’re looking to resell them, or to try to recoup any investment you might have in them, then that will have to be a different story. They just don’t sell, other than the very early pieces.

Sadly, I think many people feel there is some innate creepiness about figurines. Many liken them to dolls, which they are in a way. Some even stoop so low as to group them with clowns in the creepiness factor. Like you, many simply don’t want to dust, store or display them.

In the open market most average figurines will run under $75, sometimes way under. Thanks for a great question — a question that many have asked before.

Jerry Sampson is owner of J. Sampson Antiques, Books and Appraisals on Main Street in Harrodsburg. He has been an accredited senior appraiser (ASA) in the American Society of Appraisers since 2009.
To request an appraisal, send clear digital photos, detailed descriptions, measurements and condition to jsampsonantiques@bellsouth.net. Only one item per person. Items will be selected on an individual basis and may or may not appear in print. No coins, money, stamps, weapons or sports memorabilia will be considered. No emailed photos or information will be kept.
Information discussed in Personal Effects is not intended to be a substitute for an in-person appraisal of an item. Exact valuing can come only from actual viewing. Jerry Sampson, J. Sampson Antiques, Books and Appraisals, The Advocate-Messenger and its staff cannot be held responsible for misinformation or incorrect estimates. These featured appraisals are intended for entertainment purposes only and are not valid for insurance coverage or estate settlement.