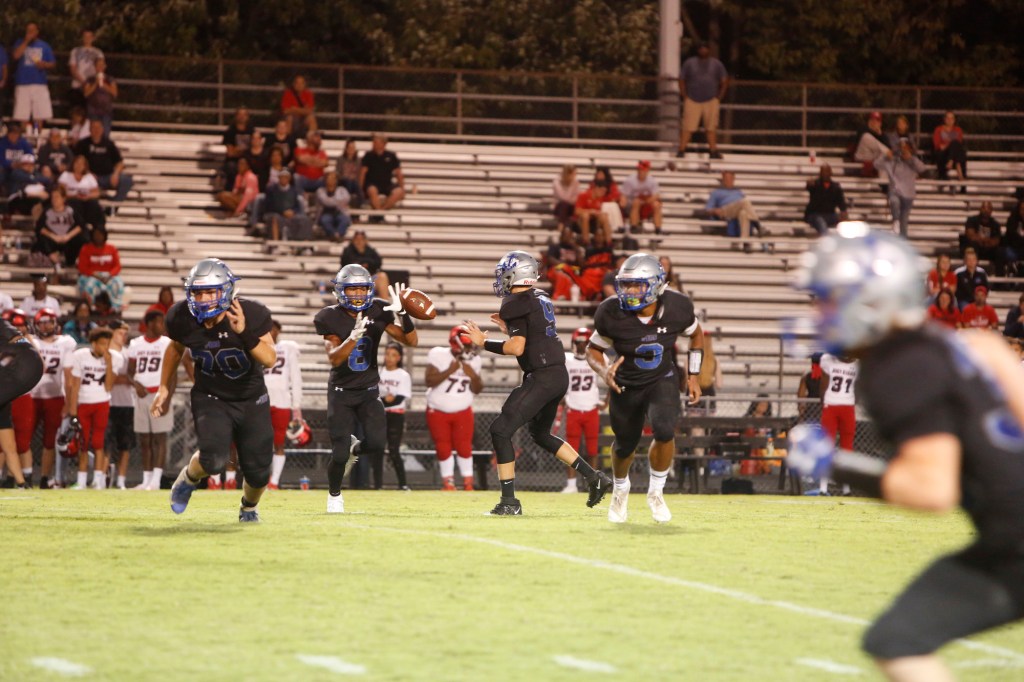 No, Danville doesn’t have much in the way of experience, but the Admirals certainly have something going for them.

Talent? Well, yes. Speed? That, too. But also the kind of approach to the game that their coach said could serve a young team well as it matures and improves.

The Admirals put that mindset to good use in their season opener Saturday night as they feasted on an equally inexperienced John Hardin team in a 48-14 victory in the Bob Allen Pigskin Classic at Admiral Stadium.

Danville coach Clay Clevenger was obviously happy with the result, but even when the outcome was still in doubt he was happy with the attitude his players displayed.

“In the last scrimmage I saw a little bit of something, and tonight I think they came out and kept that going,” Clevenger said. “It’s just a little hunger, a little drive, relentlessness, fearlessness. You’ve got a bunch of young guys out there, but they’re flying around and they’re having fun and they’re playing football.”

Caleb Burns, one of the many new faces who are emerging for Danville this season ran for 230 yards and five touchdowns and the Admirals ran circles around the Bulldogs in the first half to secure their sixth consecutive victory in their own bowl.

There has been a running clock in the last three of those wins, and the mercy rule kicked in in Saturday’s game when the Admirals scored less than two minutes into the second half to take a 48-7 lead.

It was a surprising result for a team that was coming off a 5-7 season – its first losing season in nine years – and that has only eight seniors on its roster.

“We were slept on,” Burns said. 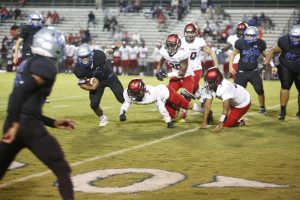 Danville running back Caleb Burns tries to stay on his feet as he moves toward the outside during the second quarter Saturday. (Photo Mike Marsee)

Clevenger said he knew what he had to work with, but he didn’t know how things would work at the beginning of the season.

“It was how well we’re going to play early until these guys get experience. There’s nothing like getting good experience and playing well and winning, too,” he said. “This will hopefully give us some confidence and we’ll come back this week ready to work and get better and get ready to play a good Bardstown team (Friday).”

Burns caught a shovel pass for a 19-yard gain to open the Danville’s first scoring drive, and he closed it with a 3-yard touchdown run.

“Once we got that first one under our belt, you could just kind of feel it,” Clevenger said. “They just really turned it up and got excited. We were playing fast, and all of a sudden we kicked it up another notch.” 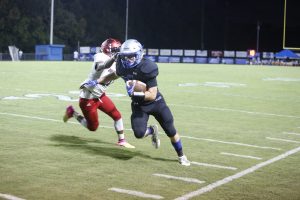 Clevenger had repeatedly urged the Admirals before the game to play fast, and they continued to do that as they began piling up touchdowns.

Burns scored three times in the first quarter on runs of 3, 1 and 52 yards, and he racked up 114 yards on 13 carries in the opening period.

“It helped us to get off to a fast start,” he said.

Keelan Story recovered a fumble to set up the touchdown that gave Danville a 20-0 lead, and he made it 27-0 when he scored on a 4-yard run following a bad snap on fourth down by John Hardin (0-1).

The Bulldogs answered less than a minute later with a 54-yard touchdown run by Dominik Hodges that was one of the few big plays allowed by the Danville defense.

“On the one long run in the second quarter I thought we just relaxed,” Clevenger said. “Those are good lessons to learn when you’re winning … and I felt like we bounced back after that.”

Danville was stopped on downs at the John Hardin 6 on its next series, but the Admirals scored twice in the final 3:27 of the first half and once more 98 seconds into the second half for a total of seven touchdowns in eight possessions.

Brady Morse, who completed seven of nine passes for 59 yards after winning the starting quarterback job, threw a 20-yard pass to Darrian Bell. Burns capped the scoring with runs of 32 and 1 yards, after which he and most of the other Danville starters left the game.

It was quite the debut for Burns, a sophomore who had only 12 rushing attempts for 68 yards in 2018, and it was a testament to the work of Danville’s offensive line, perhaps the team’s most experienced unit.

“We didn’t play part well in our scrimmages offensively, but we did see some linemen that were really getting off the football and sustaining blocks in some of the runs,” Clevenger said. “When you’ve got a lot of sophomores on field, if you can ball control and hand the football off and be able to move it and only throw it when you have to, it allows everybody to get into the flow of the game.”

The Admirals kept the ball moving in the second half behind Brady Johnson, who ran for 51 yards on 14 carries, and Sage Dawson, who completed three of four passes for 23 yards.

Danville racked up 323 rushing yards, and the Admirals outgained John Hardin 405 yards to 113 after the Bulldogs netted 100 yards in the fourth quarter.