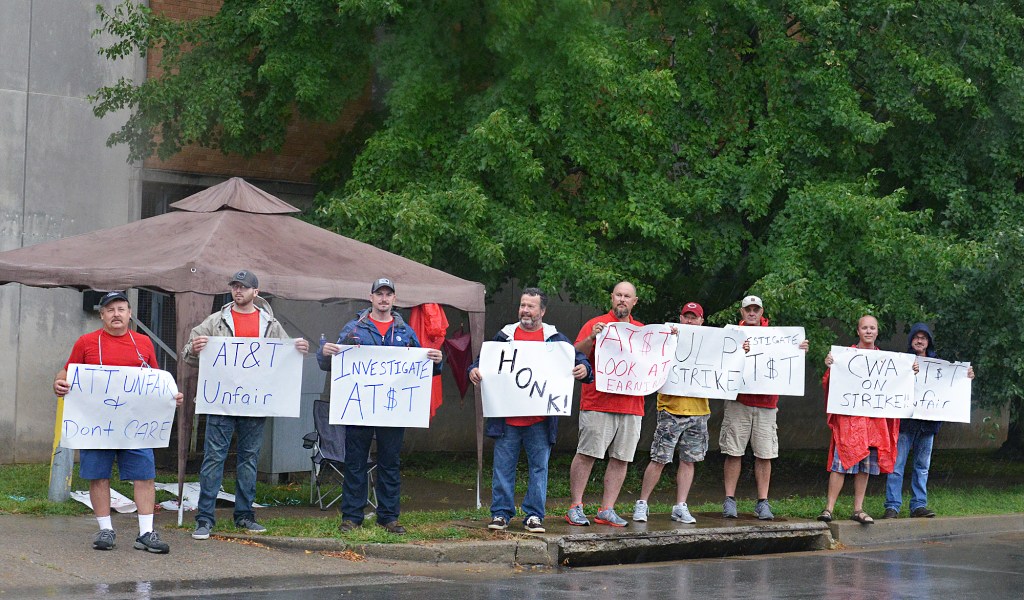 several members of the local Communications Workers of America at AT&T stand along North Fourth Street as they strike with more than 20,000 other members claiming the company uses unfair labor practices. (Photo by Robin Hart)

Members of the Communications Workers of America local 3372 at AT&T in Danville were among thousands of other members across nine states who were on strike over the weekend and on Monday. 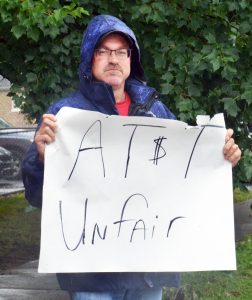 CWA member Tony Kincaid stands with a sign while on strike against AT&T on Monday in Danville. (Photo by Robin Hart)

At midnight on Friday, CWA members at AT&T Southeast went on strike over what they say are unfair labor practices committed by management during negotiations for a new contract. CWA has filed an unfair labor practice charge with the National Labor Relations Board against AT&T for not bargaining in good faith and not sending representatives to the bargaining table with the authority to make decisions, according to a news release from CWA.

“We expect there to be very long wait times for our customers,” said Ben Price, a utility operator and local vice president of CWA 3372 in Danville. “And if your service goes out, there’ll be a long time in restoring services at this time. … Customers are going to have very extended waiting times to get anything done or fixed.”

“The union showed up in good faith to bargain and the members that are there have the ability to make and agree to any decision, but AT&T has refused to send people to the table that can negotiate and are authorized to make a deal. … The ones that they sent have no authority whatsoever and cannot make any kind of deal or agreement,” Price said.

AT&T’s bargaining team “has been showing up, but they’re just not able to reach a deal with us. They’re not taking it seriously,” Price said.

He said employees have been working under the terms of their old contract, which expired on Aug. 1. Negotiations have been ongoing since June, he said.

“I don’t know if they are just wanting to just string it out and starve the members out or what. But they’re not really showing any interest at all in the bargaining,” Price added.

Another issue that the union members are trying to bring to the forefront, Price claims, is that AT&T CEO Randall Stevenson promised to use federal government tax breaks from a few years ago to reinvest into the company’s infrastructure and create “7,000 new hardhat, good paying jobs.” 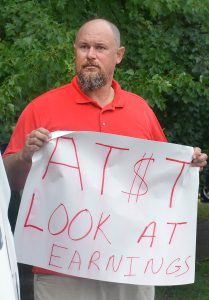 CWA member Eddie Dunn, stands in the drizzle while on strike against AT&T, along with other union members in Danville Monday morning. (Photo by Robin Hart)

“But since they got the money, they’ve cut over 20,000 workers. … So they took that tax money and they pocketed it themselves and we’re asking that Congress investigate AT&T and find out why these promises were broken that he made to the American people,” Price said.

“They’ve continued to gut the company ever since getting these tax breaks. They took the money and just put it in their pockets and they never looked back.”