A crowd gathered for the unveiling of the Abraham Lincoln statue in front of the Doherty library at Centre College. (File photo)

Centre College was in The Advocate-Messenger front page headlines seven years ago today.

A 12-foot-tall, 2,500-pound bronze statue of Abraham Lincoln was unveiled during the previous day’s opening convocation for returning students and faculty. It sits facing the entrance to Centre’s library in Crounse Hall.

The statue of a young Abe Lincoln and was sculpted by Louisville artist Ed Hamilton. The work was commissioned by an anonymous donor. 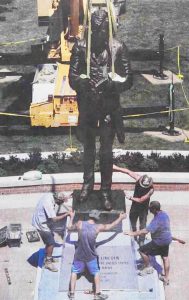 The statue was cast at the New Arts Foundry in Baltimore, Maryland, and was delivered via truck to Danville in 13 segments.

According to the article, Lincoln did have a connection to Centre College, although it’s “secondhand.”

The statue is of Lincoln reading “Commentaries on the Laws of England”, which was a book recommended by his friend, John Todd Stuart, who was a Centre graduate and cousin of Mary Todd Lincoln.

Stuart and Lincoln were both budding Illinois politicians, and while they served in the Illinois Legislature together in the 1830s, Stuart loaned Lincoln several of his books, which Lincoln developed into a “personal curriculum,” according to the article.

The base of the statue includes several quotations from Lincoln, including one preferred by Centre President John Roush: “I will study and be ready; then maybe the chance will come.”

In another headline story, Centre was described as getting ready for its second U.S. Vice-Presidential Debate, which was going to be held on Oct. 11.

College workers were about to begin removing about 600 seats from Newlin Hall at Norton Center for the Arts, in order to make room for seven television platforms for the major TV networks who were going to be covering the event.

Other workers were already laying about 100,000 feet of cable and wiring for not only the debate stage, but for all of the media networks that would be at the debate.

Also, an auxiliary electrical system was being developed and installed that would be capable of taking over without so much as a flickering of lights should the power go out.

Immediately after the debate, the extra wiring was going to be pulled, the stage would be dismantled, TV platforms would be removed and seats replaced, just in time for the Oct. 19 performance of Huey Lewis and the News, in celebration of Centre’s homecoming.