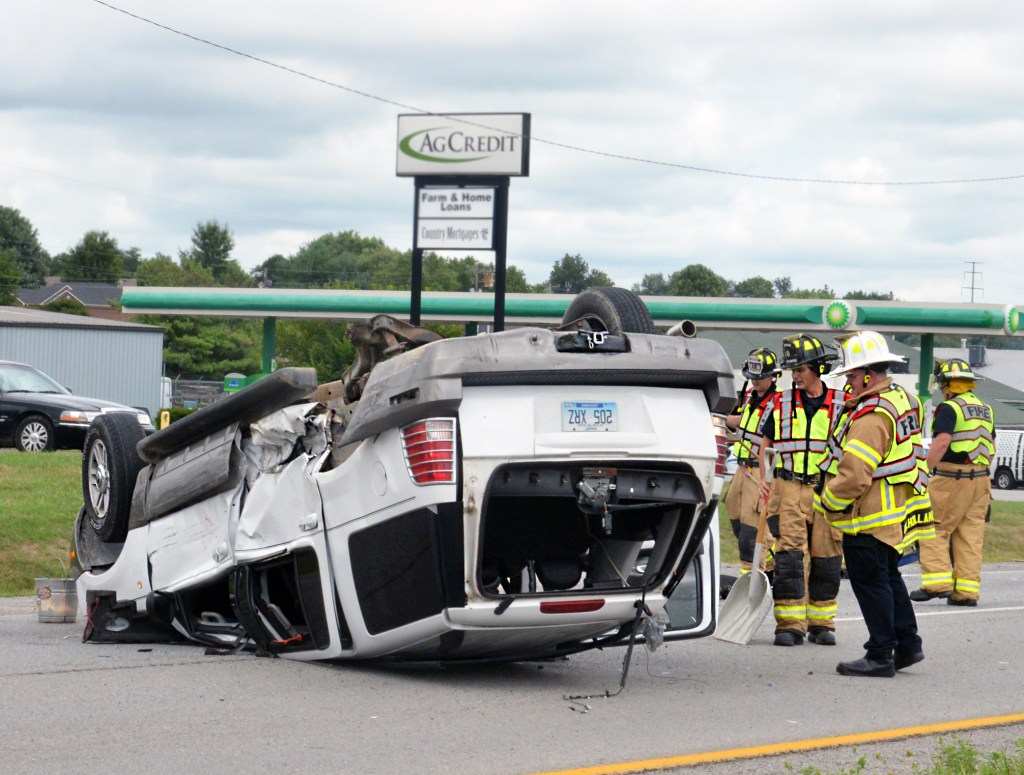 An SUV landed upside down at the intersection of U.S. 127 Bypass and Man-O-War Boulevard Tuesday afternoon. Three passengers were taken to the hospital, but the extent of their injuries is unknown. (photo by Robin Hart) 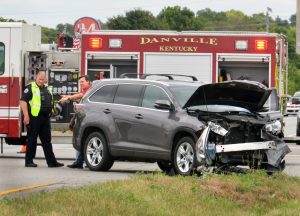 According to Danville Police, Susan Turner, 49 of Salvisa was turning northbound on the Danville Bypass from Man-o-War Blvd., and struck an SUV driven by Joshua Minto, 28, of Hustonville when he failed to stop at the red light. (Photo by Robin Hart)

Two children and two adults were hospitalized when the SUV they were traveling in allegedly ran a red light and collided with another vehicle on the U.S. 127 Bypass Tuesday afternoon.

Danville Police said that according to witness statements, Joshua Minton, 28, of Hustonville, was driving a 2004 Mercury SUV southbound on the bypass and failed to stop for the red light at Man-O-War Boulevard at 1:10 p.m.

His vehicle collided with a 2016 Toyota Highlander, driven by Susan Turner, 49 of Salvisa, who was traveling eastbound on Man-O-War, crossing the bypass on a green traffic light, witnesses stated.

As a result of the impact, Minton’s vehicle rolled over and came to rest on its roof. Passengers in the vehicle — two children, ages 3 and 4, and Maria Coats, 34, of Hustonville — were treated on scene and taken to Ephraim McDowell Regional Medical Center. The extent of their injuries were not known as of late Tuesday afternoon, police said.

All southbound traffic on the Danville bypass was diverted for about one hour. Danville Police Officer Clark Logan is the investigating officer.