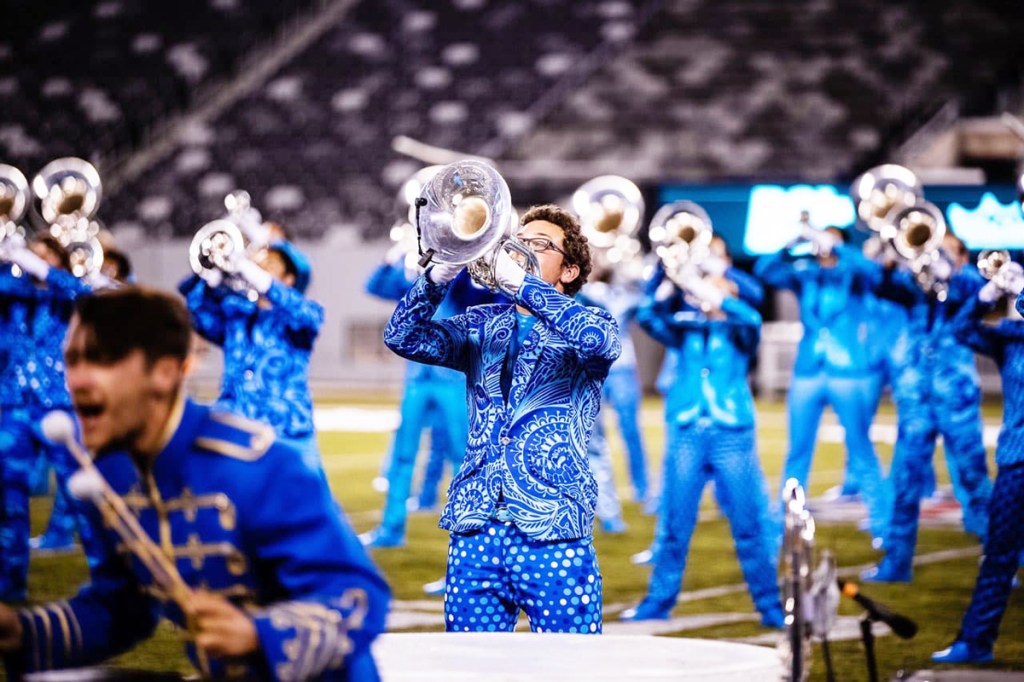 Former Marching Rebels Taylor Reynolds and Cade Samons are used to competing against each other in band competitions. For the first two years of his high school band career, Reynolds was at Mercer County while Samons was at Boyle.

The two became fast friends when Reynolds came to BCHS for band.

“He moved here because we had a better band program at the time and he was really interested in being in a really good band,” Samons said. “We were really close friends throughout my last two years of high school.”

That friendship endures, despite the fact that they are once again competitors, both in college — Samons attends UK while Reynolds is enrolled at UofL — and in “major leagues of marching music”: Drum Corps International.

This summer, both Samons’ Blue Stars of La Crosse, Wisc. and Reynolds’ Bluecoats of Canton, Ohio competed in the World Championships of DCI in Indianapolis. The Blue Starts finished eighth while the Bluecoats finished second.

For both, the journey to Drum Corps International was inevitable.

“For me, my dad has always been into band. He did high school marching band when he was a kid and went on to teach drum corps a little bit,” Reynolds said. “My senior year came around and Drum Corps had been a thing of discussion a little bit. My parents didn’t want me to audition until I had graduated, and it turned out to be a good decision, I see why they made that choice.”

“My friend before me that went on to Drum Corps (Brandon Goble), he did a year at a corps before he went to the Blue Stars,” Samons said of his path. “He’s the one who actually got me involved with them. He was the one who recruited me.” 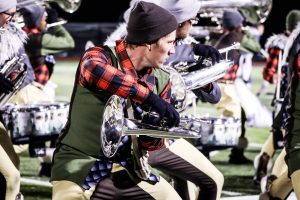 Their spot on top drum corps globally is something that is not lost back home. Current Boyle band director Zach Shelton didn’t get a chance to have Samons or Reynolds in his band, but knows how talented they are.

“I wish I had (them in my band). I’ve known Taylor for a while. He’s a great kid and performing for the Bluecoats is an impressive feat. That’s a top world corp. You’re talking about 100 of the best marching musicians in the world in a group. It’s the best of the best,” Shelton said. “Then of course Caleb marching with the (Bluestars), a group that’s on the rise. They were at the bottom three or four years ago and have started to climb. They’re inching their way to being at the top and being with the rest of them. That’s a feat in and of itself. It’s exciting.”

While DCI is the big leagues of marching band, the summer’s spent touring the country can be far from first class.

“We get on a Greyhound bus and go to a high school somewhere and get off at three in the morning and set up air mattresses and sleep in the gym,” Samons said of the road life. “It’s a lot of travel, get off, go to sleep and rehearse. It’s a really cool experience, it’s just not glamorous at all.”

Still, both recognize that it’s an opportunity of a lifetime and an experience they’ll never forget.

“I don’t see it as band anymore. I see it as professional performing,” Reynolds said. “Even though I pay to do it, the education we get — we get taught by the best staff in the world. People who know exactly what they’re doing. The most creative people I’ve ever met. It’s more that you’re getting to express yourself more through performance.” 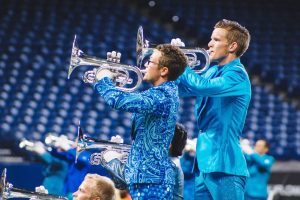 Reynolds says he realized how much he loves performing for an audience while in Drum Corps. (Photo submitted)

During the season — which runs from mid-June to mid-August — the corps will travel the country, competing against each other at high school stadiums. In the offseason, maintaining their physical fitness is the key for corps members.

As Reynolds and Samons approach age 21 — the age limit on members of Drum Corps — they have to look at what their futures will hold, professionally and musically. 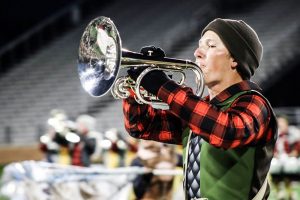 Samons wants to continue a career in musical education after he graduates. (Photo submitted)

“That’s something I’ve come to figure out about myself through Drum Corps is that the feeling I get when I perform is not like anything I’ve ever felt before,” Reynolds said. “Just connecting with the audience and seeing how your performance is affecting people is something I think is super cool.

“It’s something I’d love to do as a musician is go on to professional performance in a symphony orchestra or something like that. Where you’re playing pieces that were written way before our time and was affecting people then and is still affecting people.”

Beyond the musical education and the chance to travel the world, the connections that they’re making are what will mean the most to Samons and Reynolds.

“The cool thing about it is that even though you go against all these other corps throughout the summer — there’s 25 or 30 corps in my class of competition,” Samons said. “You go head to head and get really competitive, you see them in the parking lot after and you’re best friends with them. It’s nice to be able to compete against a friend like Taylor and then catch up in the parking lot after the show.”