One Day: Band director plans for Boyle to be among the best in the state, again 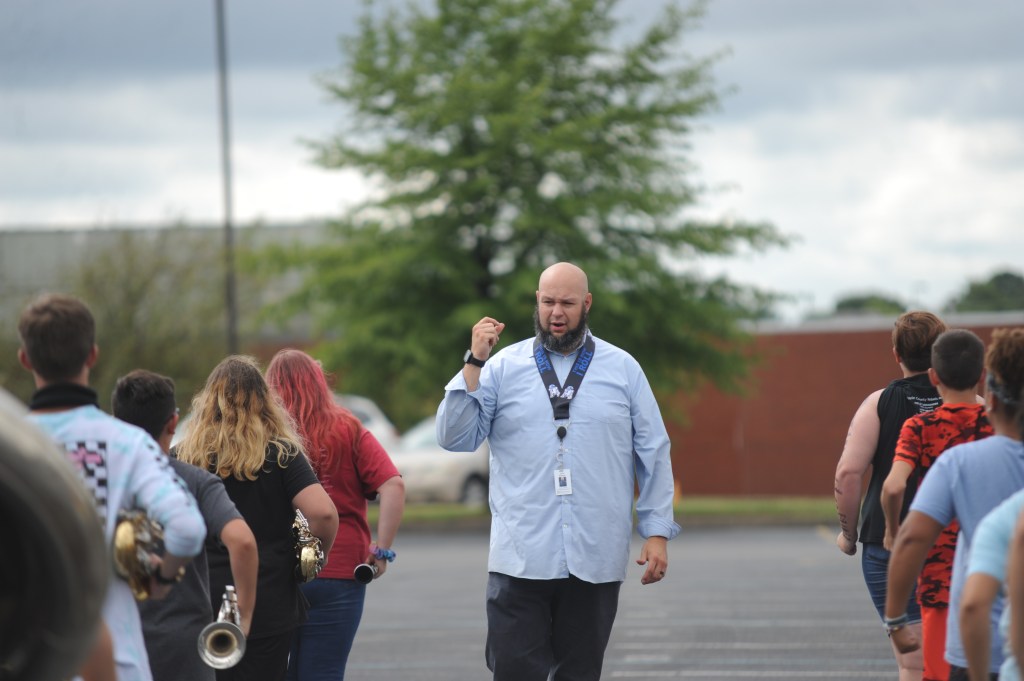 The Boyle County Marching Rebels had remarkable stability at the director position for nearly three decades and won multiple state championships during that run. Now, it has its third director in the last four years, but Zach Shelton hopes to return the Rebel band to its days of stability, and winning. 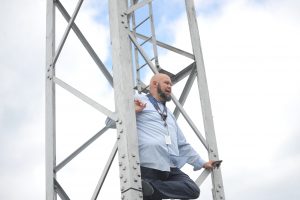 Shelton looks down as his team rehearses a section of the piece they’re practicing for Saturday. (Photo by Derek Brightwell)

“There’s a rich history of success here,” he said about why he took the job. “Selfishly, the band program has the potential to be back to where it was. It’s going to take time. It’s going to take a little bit of effort and doing things differently that they’re not used to. But we can get to a point where those 10 and 15 years of being in the state finals is still in our wheelhouse. It’s not gone away.

“As long as I’m here, I’m going to continue to push for that. I really want the program — not necessarily to regain former glory —  but to forge a new path to be something that’s consistently at the top again.”

Shelton, who was the band director for Campbellsville Independent Schools for 11 years prior, turned the band there from four members on his first day of his job to 65 on stage during his last performance. The challenge that Boyle presents is different, and it’s exciting for him.

“When everything else is top two, three or four, being seventh or eighth is unacceptable,” he said of Boyle County’s tradition of success. “We have to push ourselves to get back to the top of the ladder.

That’s what I’m excited about. It was a new challenge for me — not that I didn’t have that challenge at Campbellsville to be good. This is more of an opportunity to be a program that can be in the 100 members and could push to do more and to play at big events and travel.”

In addition to being the band director for the high school, Shelton also teaches band at the middle school level and teaches choir. His day starts at around 7:30 a.m. and can stretch until 8 or 9 at night. But he said the job of working with kids and teaching them music is extremely rewarding.

“When they finally figure it out, you see that light bulb moment where they really enjoy creating,” he said over the sound of xylophones and booming drums in the next room. “Once they figure out what’s good, then they always strive to be that top level and to be at the highest level they can. Even if it’s something as simple as ‘Baby Shark’ in the middle-school world or a marching band show with our high school kids. To reach for that consistent level of being good is a lot of fun.”

Although, he hasn’t ruled out the possibility of sneaking ‘Baby Shark’ in at some of the high school football games. 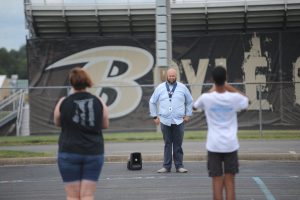 Shelton hopes to move the Marching Rebels into the modern style of band and to compete for state titles again.
(Photo by Derek Brightwell)

Shelton is also acutely aware of the shift in what marching bands are expected to be today. He says that the difference between what worked 20 years ago and today is that bands have “got to put a production on the field.”

“You’ve got to tell a story and you’ve got nine minutes to get them fully invested,” he said. “Break their hearts. Bring them back from the edge of death. Give them some catharsis. All in nine minutes. It has to be done with music and sound and lighting and flags, and all in a nine-minute span.”