Officials discuss what could be done better at Perryville Battlefield 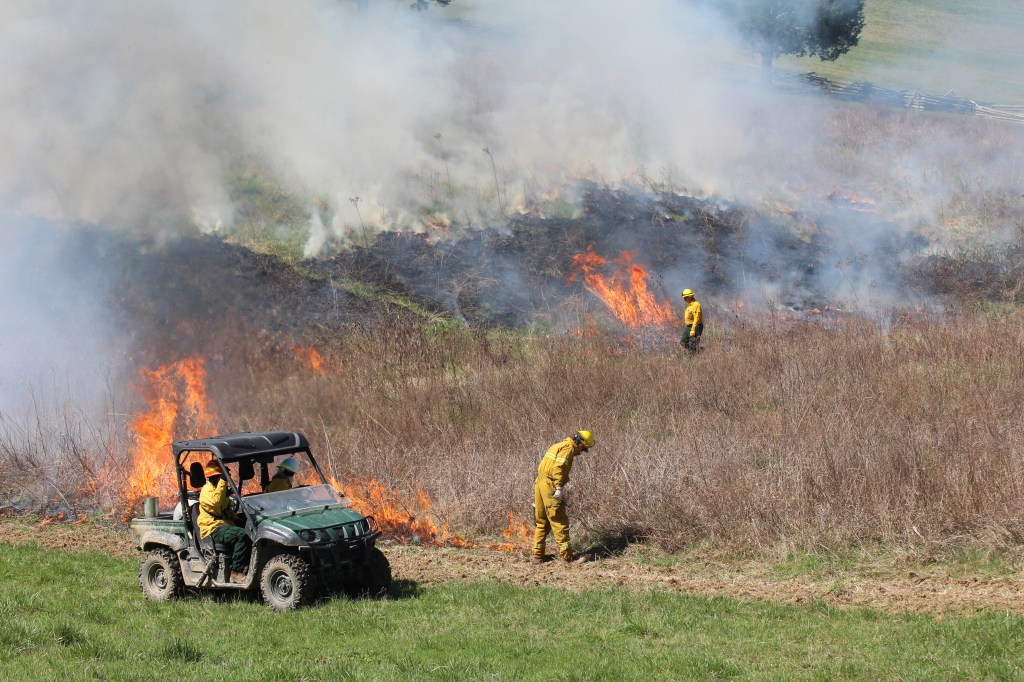 Kentucky Fish and Wildlife workers conduct a prescribed burn at Perryville Battlefield in 2016, as part of a project to replace fescue with native grasses and wildflowers, improving habitat for bobwhite quail and other species. (Photo by Ben Kleppinger)

Editor’s note: This is the second of three articles about what the future holds for Perryville Battlefield and what plans local officials are working on right now.

Perryville Battlefield is the most complete battlefield park in the nation — it has more of the original battlefield site preserved than any other, including more well-known battles such as Gettysburg. 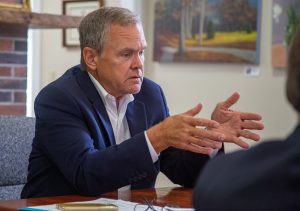 Tom Bennett with the American Battlefield Trust talks with members of the Economic Development Partnership’s Asset Development Committee this week about paths forward for Perryville Battlefield. (Photo by Ben Kleppinger)

Perryville has that going for it, but that doesn’t mean the park has it made in the shade. Tourism suffers because of poor access to the park’s location, and many of the facilities are decades old and long overdue for upgrades, according to local leaders with the Danville-Boyle County Economic Development Partnership, who are looking into how to improve the park’s future.

“We have a real diamond in the rough here,” Boyle County Judge-Executive Howard Hunt said. “And it’s in the rough because nobody knows about it.”

Further limiting the park’s potential is a ban on any kind of hunting on its 700+ acres, said Tom Bennett, a representative for the American Battlefield Trust, which has helped build the battlefield into the well-preserved site it is today.

Horses aren’t allowed at the park either, according to Convention and Visitors Bureau Director Jennifer Kirchner.

“Not having horses there has always been a head-scratcher for me,” she said. “Horses were there when it was in the making” during the Civil War.

According to news archives, Fish and Wildlife helped fund a project in 2016 that improved habitat for bobwhite quail and other species by converting fescue to native grasses and wildflowers on 625 acres at the park.

Bennett also encouraged leaders to get local schools teaching more history and using Perryville Battlefield to do it. He said he teaches a class on natural resources at EKU and one year, he asked his 32 students when the Civil War occurred; none of them knew.

“Get the history teachers in this community to start teaching history and get them to take those kids out to Perryville Battlefield,” he said. “If they don’t know we had a Civil War and what it was fought about, in 10 years when they’re voting you won’t have any support for moving additional resources out there.”

Bennett said local leaders could also look into getting state help to straighten and flatten roads that lead to the park, and improve signage so more people know how to get there. 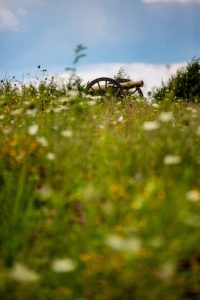 Native grasses and plants added as part of a project funded by Kentucky Fish and Wildlife grow at Perryville Battlefield State Historic Site in 2018. (File photo by Ben Kleppinger)

Perryville Mayor Brian Caldwell said the park’s facilities are one of the biggest obstacles he sees to realizing its potential.

“Me personally, I’d probably start with trying to get some money … to update the facilities out there because they’re just not good at all,” he said. Leaders said for example, the visitors center still has the same two bathrooms it did when it was constructed in the mid-20th century.

Vicki Goode, director for Main Street Perryville, said it’s vitally important if leaders do develop a plan to bring more tourism to Perryville Battlefield, that the park be ready with adequate facilities.

“I don’t see much of that down there,” Hunt said.

“No, there’s not — that’s what I’m saying,” Goode said. “If you encourage that, you’ve got to be ready for it. Because they’ll come once, and if it’s not there, they’ll tell everyone they know, ‘Don’t go there; they can’t handle groups.’”

Read tomorrow about the potential pros and cons if Perryville Battlefield were designated a national historic site and taken over by the National Parks Service.