Admirals look to ‘shock the state’ in Bardstown 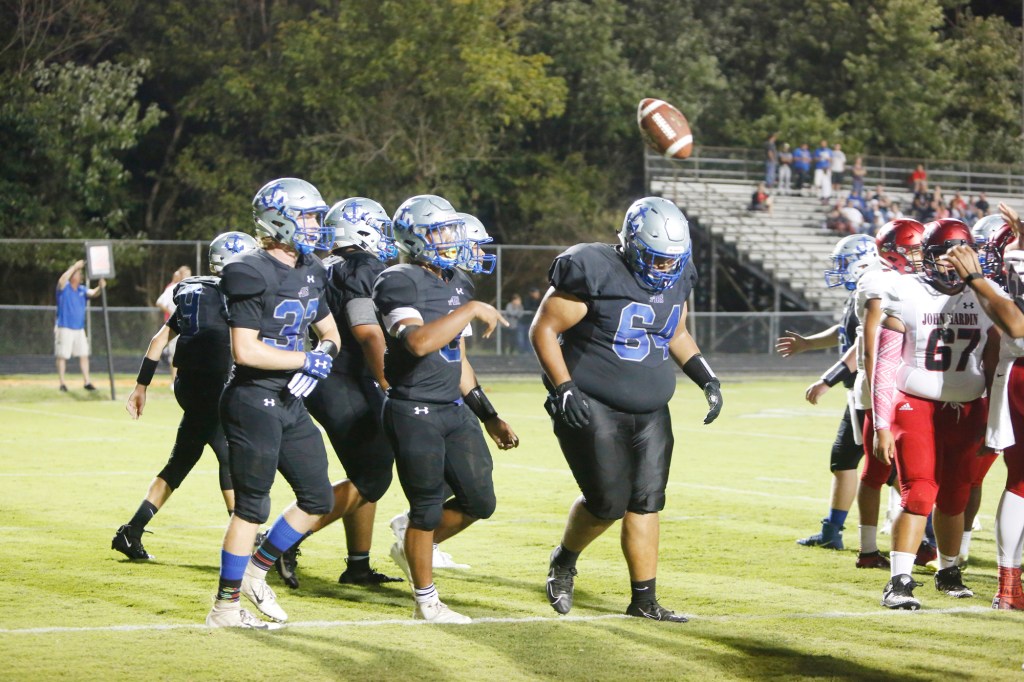 Danville running back Caleb Burns, center, flips the ball toward an official as he celebrates with teammates after scoring the first of his five touchdowns on a 3-yard run during the first quarter Saturday. (Photo Mike Marsee)

Last Saturday’s 48-14 win over John Hardin in the Bob Allen Pigskin Classic proved a lot of doubters from the offseason wrong. This Friday’s game at Bardstown is a chance for the Admirals to prove that it was legit.

“I think we can shock the entire state of Kentucky if we beat Bardstown,” senior linebacker Eli Tibbles said.

“Last week proved a lot of people wrong,” senior receiver Trey Dawson added. “People talked like we weren’t going to be as good as we showed last Friday.”

One of the reasons that sceptics had their doubts was the number of young players filling in at key positions. Danville’s 2018 team only managed five wins and lost 19 seniors from that squad. But with guys like sophomore running back Caleb Burns — who rushed for 227 yards on 21 carries, taking five of them in for scores — the Admirals feel good about what they have.

Coach Clay Clevenger hopes that his players, especially the young ones, can stay hungry after the early success.

“I told them Saturday after the game ‘don’t think about getting the big heads because I’ll bring a pin to pop it with,’” he said. “As soon as you start feeling really good about yourself this game has a way of humbling you. You’re better off staying humble and keeping on working.”

The task at hand this week is the first road game and an opponent in Bardstown who managed to hang with one of the best 1A teams in the state in Pikeville last week.

“They’re a really good team. We’re going to have to play really good football to have a chance to win,” Clevenger said.

The biggest thing that jumps off the screen at the coaching staff when they watch film is the big play ability of the Tigers. In the Pikeville game, they were able to string together 19 unanswered points to take the lead, including a big kickoff return for a touchdown. 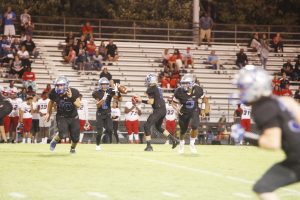 “That’s the one thing that sticks out,” Clevenger said. “They’d go a couple of series and not do a whole lot offensively. Then boom. They throw a quick pass to the flats and he takes it 70 yards. They come out — they got down a little bit early and then they hit a kickoff return.

“They obviously have big play potential and that makes you nervous anytime the ball’s snapped. They have guys that are capable of taking it the distance.”

Still, Clevenger thinks that if his young team can handle an early onslaught from the Tigers, and gain confidence, his team will be fine for the rest of the game. “If not, it’s going to be a long night for us.”

While the headlines coming out of Danville’s season opener revolved around the breakout performance from Burns and the rest of the Admirals rushing attack, run defense is a strength for the Tigers.

“I think they do a good job — especially their interior guys, their box guys. They play the run well. They’re really aggressive,” Clevenger said. “They play downhill and really attack you.”

Offensively, the Tigers implement an unusual scheme. They run out of a wing T formation, but also implement a quick passing game, giving the defense multiple looks.

“Their personnel dictates that they have a couple of talented receivers — I’m sure they’re trying to get those guys the ball in space,” Clevenger said.

The coaching staff wanted to get as many reps in against the unusual offensive and defensive sets from their opponent this week. However, poor weather this week has rushed the on the field practice and resulted in more film study than a typical week. Clevenger feels that his team is prepared, and welcomes the different looks his team will see because of their youth.