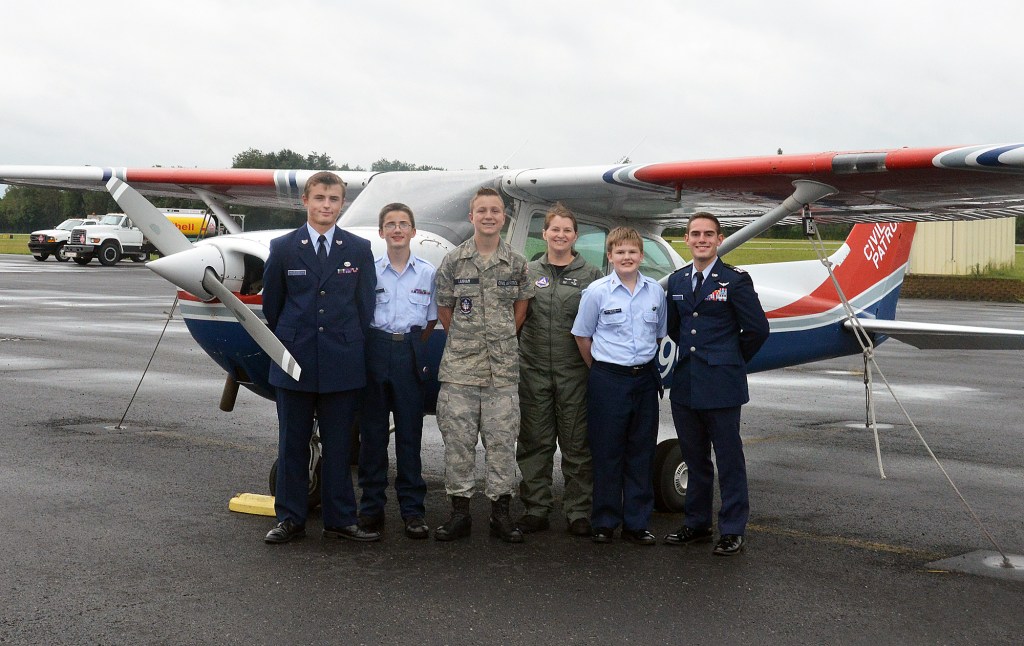 After more than a decade of not having its own airplane, the local Civil Air Patrol squadron now has possession of a red, white and blue Cessna 172. CAP members are now planning on using it for cadet orientation flights, emergency missions and cadet flight training. 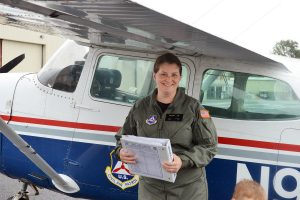 Capt. Kelly Wilhite is the squadron’s only trained pilot. Wilhite is waiting for one flight before she will be able to become a flight instructor. (Photo by Robin Hart)

“The plane will be used mostly for cadet orientation flights at first,” said Squadron Commander Nick Birt. “But as soon as we can get our people qualified, it will be used for search and rescue missions and photographic reconnaissance.”

The Civil Air Patrol is the largest civilian fleet of single engine planes in the world, with almost 500 aircrafts stationed all across the nation, Birt said. It’s mission is, “Supporting America’s communities with emergency response, diverse aviation and ground services, youth development and promotion of air, space and cyber power,” according to its website.

After working for 18 months, “We were given custody of the aircraft after recruiting pilots, getting them through the many qualifications that CAP requires its pilots to obtain,” Birt said.

In order to receive a plane from CAP, “We had to put a plan together and recruit pilots. We have five qualified pilots at the moment,” Birt said. And they are ready to start their training specifically for CAP.

Right now, Capt. Kelly Wilhite is the squadron’s only operational pilot, having passed the CAP qualification flight a couple of weeks ago. Two more squadron pilots only require their check ride.

“She’s qualified to be a transport mission pilot. She can fly cadets on orientation flights. She can move members around, or she can move cargo,” for a relief agency during an emergency, Birt said.

Wilhite was a nurse with the U.S. Air Force, is the squadron health services officer, mother of six children and the wife of CAP 1st Lt. Gregory Wilhite, who will be taking over the squadron command from Birt in September.

Birt said having an airplane “is a big deal” for the cadets. “Most cadets want to become a pilot. But CAP, as an organization, didn’t do that previously,” he said. “We had cadets who could go away and do other activities to fly, but we didn’t do training here at the squadrons, because most of the airports where we’re (CAP) based have flight schools. So we didn’t tread on their toes.”

“But there’s such a shortage now of pilots. … That’s why CAP is stepping up our game to produce more pilots, both for the military and civilian enterprises. That’s one of the reasons we’re pushing for pilots like Kelly. She’s waiting on one flight to be a certified flight instructor. Once we’ve got more flight instructors as CAP pilots, we can start training cadets in house,” Birt said.

The airlines are “desperately” short on pilots, he added. “The way air transport is changing, the aircrafts are getting smaller and there’s more of them, so they need more pilots,” Birt said. “Where the military is shrinking, they’re not training as many pilots so there’s less pilots coming out of the military to fly the planes we’ve got.”

Birt’s 15-year-old daughter is also a CAP member and is planning on getting her pilot’s license next year. 1st Lt. Chloe Birt is Squadron 122’s cadet commander and communication’s training officer for CAP’s Kentucky Wing. She also serves on the national communications board, Birt said.

Because of the shortage of pilots, “CAP has just introduced a whole bunch of new scholarships and they’re opening up to a lot more cadets,” he said. “My daughter has already started the application process for next year to become a pilot.”

He said he hopes that this time next year, a good story would be about how “Kelly trained Chloe on our plane. Local kid with local pilot. That would be awesome.”