Perryville Battlefield isn’t a national park. Should it be? 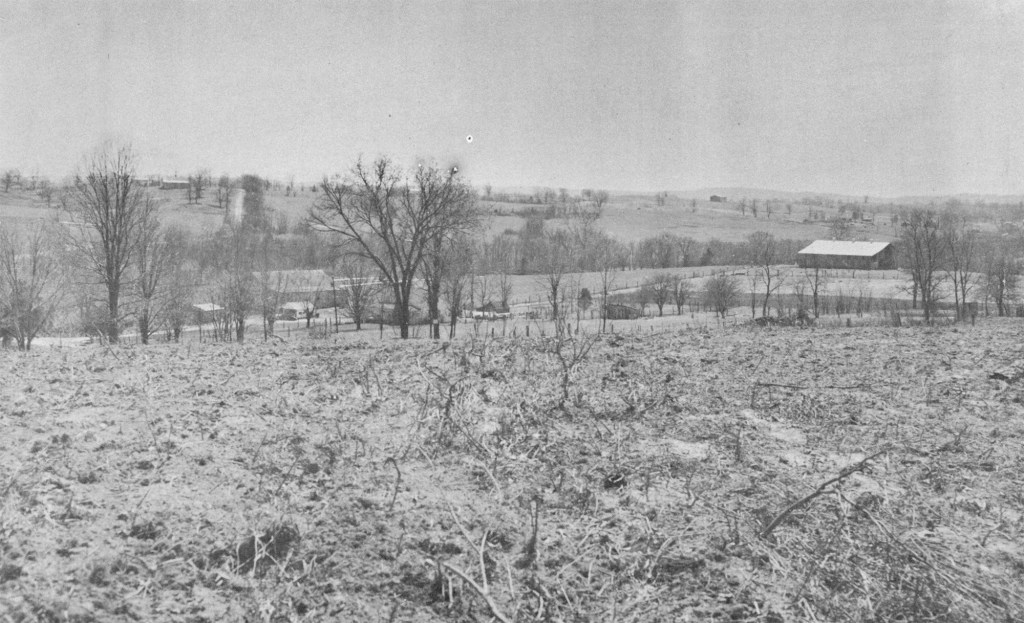 This ridge above Doctor's Creek at Perryville Battlefield is where some of the heaviest fighting occurred during the 1964 Battle of Perryville. The Squire Bottom House, at the foot of the ridge, served as a hospital after the battle. This photo was taken April 6, 1959, around the time the National Park Service was taking steps to designate the battlefield as a registered national historic landmark. (National Park Service photo)

Kentucky is currently home to 32 national historic landmarks, including Perryville Battlefield. But while the battlefield has been recognized by the National Parks Service since 1960 for its historical significance, it has never been made an official part of the National Park System.

That could change if local leaders can get organized around a campaign to have the National Parks Service take over the battlefield, meaning the federal government would pay for park maintenance and programming. But it’s a move that’s been tried and failed before. And some in Boyle County have serious doubts about whether the pros truly outweigh the cons.

The process would begin with congressional legislation introduced by Rep. Brett Guthrie, Boyle County’s member of the U.S. House. That legislation, if passed by Congress and signed by the president, would fund a study by the National Parks Service, which would form the basis for the NPS to take ownership of the Perryville Battlefield land, explained Jennifer Kirchner, director of the local Convention and Visitors Bureau.

Guthrie has said he would want a community meeting in Perryville to gauge interest before he moved forward with any legislation, Kirchner said.

Preservationists in Pulaski County just recently completed the lengthy process for Mill Springs Battlefield. In March, President Donald Trump signed legislation that affected more than 100 public lands and protected millions of acres of federal land; the designation of Mill Springs as part of the National Parks System was part of what he signed, according to reporting from the Commonwealth Journal in Somerset.

“(Trump) was thrilled to do it, as was I thrilled to see it done,” U.S. Rep. Hal Rogers told the Commonwealth Journal. “… Making this part of the National Park Service will give it national recognition, national advertising. I think it will bring lots of tourists to the area, especially when there are large reenactments.”

Kirchner said one reason NPS took ownership of Mill Springs was because the park was in danger of being lost to development.

“Perryville is not in that situation,” she said. “It’s actually at the opposite end of the spectrum. It is the most preserved battlefield in the country.”

Boyle leaders tried before to put Perryville Battlefield in the National Park System. They made a concerted effort toward that goal in the 1950s and 1960s, according to the battlefield’s historic landmark file with NPS. While NPS agreed to designate the battlefield a registered national historic landmark in 1960, it declined to take over the park, which at the time consisted of just 17 acres (today, there are 890 protected acres).

An apparent letter-writing campaign from Boyle residents was unsuccessful in changing the NPS’ mind. Writers pointed out NPS had already accepted ownership of less significant Civil War battlefield sites. But their pleas were met with a form response, stating the NPS board was maintaining that “no additional Civil War sites be added to the National Park System.”

The NPS board “has repeatedly taken the view that this period of our history is adequately represented by the numerous battlefield and other related sites already units of the system,” one of the form responses from 1961 states.

Today, pursuing NPS ownership is still a path available for Perryville Battlefield, if local leaders want to go down the path.

“If we want to secure Perryville, the best way I see long-term is to tie it to the feds, because the state is going to continue to look for ways to jettison (parks), free up (money), whatever,” Danville Mayor Mike Perros said.

But federal ownership comes with restrictions, too. Perhaps most notably, reenactments could no longer occur on battlefield land, according to Tom Bennett with the American Battlefield Trust and Kirchner.

Reenactments of the Battle of Perryville, held on major anniversary years at the battlefield, are a huge draw to the site, bring thousands of reenactors and thousands more tourists. Under federal ownership, reenactments wouldn’t necessarily disappear, but they would have to be held on other land near the battlefield property, rather than right where the original battles occurred. Judge-Executive Howard Hunt said that’s how some reenactments are conducted for the Battle of Gettysburg.

Bennett also questioned what might happen to the robust community of volunteers that Perryville Battlefield benefits from today if the federal government took over.

“Perryville folks are very active over at the battlefield — that association that manages the volunteers,” Bennett said, referring to Friends of Perryville Battlefield. “Would they volunteer as much here in Boyle County if it was a federal facility? All politics and all volunteerism, I think, is local. And if it’s a federal facility — I don’t know if Mammoth Cave National Park, I don’t know if any of these national sites around Kentucky have volunteer organizations that come out like you do over here in Boyle County and Perryville.”

Perros said volunteers wouldn’t be needed as much under NPS ownership, because “It seems as though the federal government provides all the support that they would ever need — that there’s really no need for local support or involvement.”

Perros said it seems like a good idea to him if “the only negative” to having NPS take over Perryville is the loss of reenactments at the site, and the positive is strong federal funding.

“Assuming the national government is going to fund it better than the state is a bit iffy right now,” said Jeff Jewel, director of the Chamber of Commerce. Jewel said he has friends who work for NPS in the western U.S., and funding isn’t as strong for parks as some might think or hope. “I know out in Yellowstone, they can’t afford toilet paper, basically. It’s really bad.”