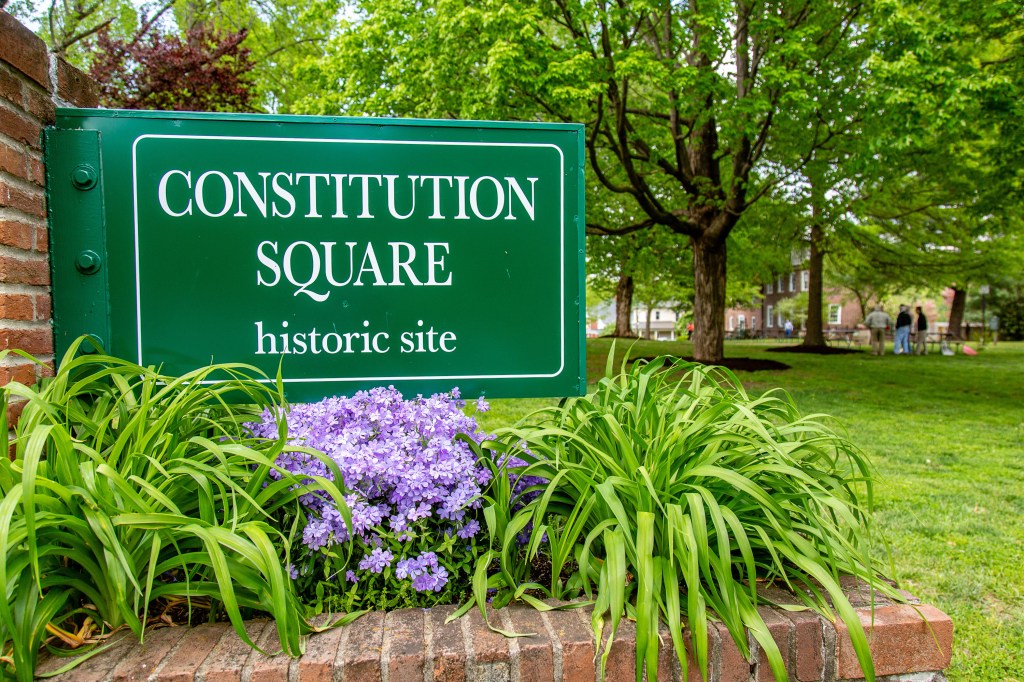 Flowers grow underneath a sign welcoming people to Constitution Square during a volunteer cleanup day this spring. (File photo by Ben Kleppinger)

Boyle County plans to spend $2,250 to improve the two main signs at Constitution Square — an improvement the local tourism director says is “critical” to giving tourists a good experience.

“Those signs needed to be in the ground last May, when visitors season started,” said Jennifer Kirchner, director of the Convention and Visitors Bureau, during this week’s Boyle County Fiscal Court meeting. “We have people coming to the park — they don’t know where they’re going, it looks in disarray, the bricks are crumbling. This signage and it getting in the ground, like, yesterday, is a critical improvement.”

Kirchner said the CVB is fielding many complaints that people coming to the park “don’t know where to go.”

“If that is our welcome mat to the county, which I totally think that it is, we’re not doing a very good job right now,” she said. “I’m pleading that we can move forward with those signs as quickly as possible.”

Kirchner had been under the impression the county already had money budgeted for the signs. She said Tuesday the fiscal court had discussed the allocation during its budgeting process. But out of around $9,000 budgeted for capital expenditures at the park, only $500 was allocated for sign repairs.

The fiscal court voted to reallocate some money that had been set aside for planters and shrubs at the park to cover the $2,250 bill for the signs. But it did so over the objections and “no” votes of two magistrates, who wanted the county to seek other bids for the work.

Cottage Interiors, a Danville company run by Janet Hamner, had done previous work on the park’s two main signs and this new work is a continuation of that work, Kirchner said.

The plan is for Cottage Interiors to remove the crumbling brick bases around signs facing Main and Walnut streets and mount the signs on new steel posts. The Walnut Street sign will also have a map of the area added to make navigation easier for tourists; and the Main Street sign will have hooks that will allow for banners to be hung.

Magistrate Jason Cullen said he would rather the court ask for bids from other sign companies in Danville, in order to assure the county was getting the cheapest price; Magistrate Tom Ellis agreed.

Kirchner said if the court wanted to do that, it would have to start over from scratch on the signs, including paying for new graphic design.

“I cannot give Ms. Hamner’s designs to another sign company. That’s her proprietary work,” Kirchner said. “So we would need to start with a whole new … graphic design.”

Kirchner said Hamner’s price is saving the county thousands over what it could cost.

The court soon took a vote, after multiple other magistrates called for the question. The sign plan passed 4-2, with with Cullen and Ellis voting against. Ellis said he voted no “in principle.”

“I think there’s a higher principle brought up here by Magistrate Cullen and we have got to be careful because (Boyle County Treasurer) Mary (Conley) has told us about our reserves,” Ellis said, referring to previous comments from Conley warning the county has been outspending its revenues for several years in a row.

Magistrate John Caywood said after the vote he appreciated the fiscal court “raising the bar” when it comes to improving Constitution Square, which has lacked appropriate levels of maintenance and attention in past years.

In addition to the two main signs, the CVB is paying another $750 to reword all the green signs in the park that identify what organizations and services are available in each building.

• approved placing four signs on existing poles at major entrances to Danville stating it is the hometown of Larnelle Harris, an internationally known singer and songwriter who has won multiple Grammy and Dove awards.

• OK’d the purchase of a 2020 Ford Fusion for about $21,000 for use by the Boyle County Detention Center to transport small numbers of inmates.

• took the compensating property tax rate for 2019, meaning tax revenues will remain essentially flat. The county rate is 6.8 cents per $100 of assessed real estate value, up from 6.7 cents last year. That means a homeowner with a $100,000 property will pay $68, which is $1 more.