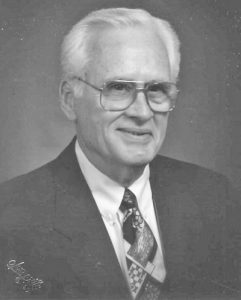 Charles graduated from Lawrenceburg High School in 1945. He attended the University of Kentucky and Eastern Kentucky State College. A member of Sigma Alpha Epsilon fraternity. During World War II, he served with the U.S. Navy in the Pacific Theatre. He was honorably discharged following the Japanese surrender. He became actively engaged in multiple business enterprises with his father. He helped develop subdivisions, building houses, was an auctioneer, was owner of Humston Insurance Agency, and partner in several agencies throughout Kentucky. He was on the President’s Counsel with Safeco Insurance Company for several years. He earned the designations of “Certified Life Underwriter” (CLU) and “Chartered Property and Casualty Underwriter” (CPCU). He taught CLU and CPCU classes plus other insurance classes through Eastern University. He retired at the age of 90.He was an avid participant, portrayer and supporter of his religious convictions. As President of God’s B.A.S.I.N. (Brothers and Sister in Need) he ministered to the needy and underprivileged of Anderson County. He was a member of the Board of Directors of Prayer Life Seminars, Inc. for over 25 years. This ministry took him and his wife overseas and throughout several states in prayer and prison ministry. He was an elder and deacon in the Presbyterian Church, USA. A member and Chairman of Transylvania Presbytery Evangelism Committee. He was a member of The Gideon’s International. Currently Charles served Hope Community Church since its beginning as an Overseer and a Stephen Minister. He was an avid golfer, family man and enjoyed his cabin on Beaver Lake with its big fireplace.

His life was portrayed by JOY (Jesus, Others, Yourself).

Cremation was chosen. A time of visitation with the family will be held on Sunday, September 1st from 1-3 p.m. at the Ritchie & Peach Funeral Home followed by a committal service at the Lawrenceburg Cemetery pavilion. Dr. Jeff Eaton will officiate the service.

Condolences to the family may be expressed at www.ritchieandpeach.com